fanfare
She arrives late to the concert and trills apologies, her arms flung wide for balance, as she walks crabwise down half a row to her seat.

pastry
The chocolate rugelach they bring out isn't dry and flaky. The chocolate is seeping deliciously into the dough.

realized
She transformed a secondary character from a stock figure to a person.

residence
She makes a Lego version of me, a princess with glasses and a crown, and installs me in a two-story, two-room house with a rooftop observatory and the necessities - a tree, a book, a bar of gold, a hairbrush, and a cape.

unblinking
In the back of the pickup truck, he keeps a stuffed animal basset hound that stands guard over his gear.

upbeat
A day of feeling down ends on a bright note, as if a curtain's been brushed aside, thanks to a good dinner with some good people.

waggle
He's a few decades older than they are, so he flirts with them in a paternal way, one leg propped on the seat next to theirs, his elbow on his knee as he leans forward to explain the world to them and give them little compliments. They smile at him politely until his wife reappears.

inhaling
At different points in the hike, we smell heavy flowering shrubs, a days-old tuna fish and banana odor from the waste treatment facilities, throat-scorching exhaust fumes, the cleanness of salt water and suntan lotion.

pastels
The homes are in cream, peach, and plum colors. They overlook a river that has a silver sheen in the mid-day sun. Hibiscus shrubs line the paths, and swan-shaped flower pots nestle in the shade.

rib-tickling
We try ballroom dancing one evening, and we laugh much more than we dance.

self-contained
She's a silent, steady hiker. She wears headphones and walks at an unvarying pace.

settings
There's a story wherever we look - off the shores of the island, there was a boat accident that killed hundreds, and in the shade of a massive bridge, a grove of trees has been planted as a gift from a foreign prince.

spray-painted
Most of the graffiti images are cartoon characters and portraits of local residents. They stare at bricked-up warehouse windows and smile across unused train tracks.

wetlands
For neighborhoods along the shore, the marshes offer different kinds of protection. They help filter pollutants. They reduce erosion and flooding. They're a bit of nature stitched to the fringes of a city.
Posted by HKatz at 12:16 AM

Old Goriot - what genuine feelings survive when everything's a transaction?

Honoré de Balzac sets much of his novel, Old Goriot, in a dingy Parisian boardinghouse during the period of the Bourbon Restoration. Madame Vauquer runs the place and might call herself the "mother" of all the tenants - mostly young people who are struggling to make their way in the world (like the law student, Eugène de Rastignac), old people who are probably stuck there for good (like the titular character, Goriot), and maybe one or two others whose finances are a mystery.

The boardinghouse occupants, if one squints, could be seen as a kind of family, dining together and getting in each other's business, but Madame Vauquer isn't a real mother. Her relationship with the boarders is transactional, and the ones who can't afford to pay her much get the worse rooms. It's business.

gelato
On a warm night, the ice cream store is a cold, clean square of light.

lop
When he plays Clue, he starts to shorten most of the names, maybe because he's trying to sound like a hard-boiled detective. Miss Scarlet becomes 'Scar.' The conservatory is "the serv."

narratives
He comes across short stories of people from a country he doesn't care about. After that, he wants to know more about their struggles and their way of life. He'll ignore a news report, but the short stories humanize them to him.

performing
At the table, the kids interview each other as they pretend to film a talk show. Meanwhile, one of the adults crafts an ostentatious display of temper for the waiter.

pizzazz
Many situations can be improved on with a bit of jazz hands and a song.

reek
The car smells like sweat and onions. Even with the windows rolled down, the smell persists, mixing with the cool wind and swirling through our heads.

felicity
A German couple who have just gotten married in NYC have an impromptu first dance by the lake in Central Park. A performance artist who has been playing guitar all afternoon sings "Can't Help Falling in Love," and a small crowd of passersby from the city and around the world join in as the couple slow-dances.

gobble
Turtles bob towards the shelf of rock where people have scattered crumbs and chunks of fruit.

meliorate
A book, a bench, clean air among trees.

overthrow
The statue of a sword-wielding king on horseback has been toppled. This could be taken as a sign of political upheaval, but really the monarch is undergoing restoration and will soon be righted.

redefine
He portrays her volatile behavior as normal. This is one way he copes with it and accepts it as part of his life.

undisclosed
It's been months since I've heard from her, and I'm both worried and relieved.
Posted by HKatz at 11:51 PM

Some articles on the state of healthcare in the US...

One article I read for Deal Me In - "Bitter Pill: Why Medical Bills Are Killing Us" by Steven Brill - is a depressing look at medical costs in the US. Although it was written before the ACA (Affordable Care Act) really went into effect, the problems are still prevalent in our messed up healthcare system. For instance, the article gives examples of the lack of transparency in hospital bills and their inexplicable charges, and how hospitals can charge patients multiple times for the same item (a pill, a pair of latex gloves, etc. etc.) at inflated prices.

And this article only gets at some of the issues that make our system unworkable in the long-run. One sign of a good article is that it motivates you to immediately look for others on the same topic, which is how I found this one, also worth reading.

Another critical part of the healthcare problem lies with our habits and choices, too little emphasis on prevention and an industry bent on getting us to live off of junk food (topic of a different essay). Plus, wages aren't keeping up with the costs of healthcare (and housing and education).

I don't know what to say about all of this. So I'm just dumping it here in a grim heap for you to pick through.
Posted by HKatz at 1:19 PM

bower
Fat green leaves ripple against the railings of the balcony.

edged
The broad reservoir is rimmed with trees and buildings. To the north, stumpy apartment houses mostly, and to the south, silvery high-rises.

indulge
She reads a lot, and mostly on her own, but she sometimes wants to be read to. She can close her eyes whenever she wants, or jump in to share her ideas with someone who won't have a problem pausing to listen.

knucklebones
The rubber ball from a game of jacks shoots away and pings the table legs.

mise en scène
They could stage one of Shakespeare's plays here, in the garden where the paths whirl up a hill among flowers and low-hanging trees, and the rats scurry around at dusk.

reassure
They don't make hide-and-seek too scary for him. His mom hides, but he can still see her elbows and purse poking out from behind the tree, so he's laughing and stumbling to her immediately, without a fear that she left for good.
Posted by HKatz at 6:43 PM

Hike from GWB to Piermont, NY

Last Sunday, I went on a hike that started at the George Washington Bridge Bus Station in Upper Manhattan and ended roughly 18 miles later in the village of Piermont, NY. Most of the hike took place on the Long Path trail through the New Jersey Palisades, and some of it also cut through Tallman Mountain State Park.

The hike was challenging mostly because of some steep parts and many places where the trail was rough. The weather turned out great, sunny but not too hot.

Here are some photo highlights: 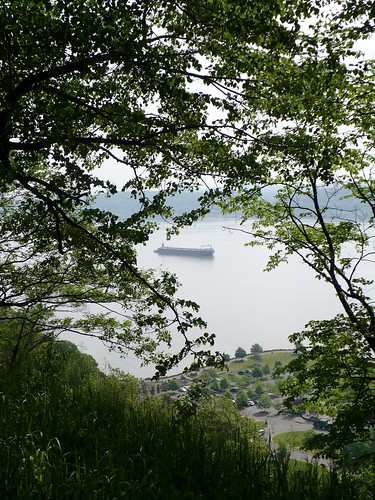 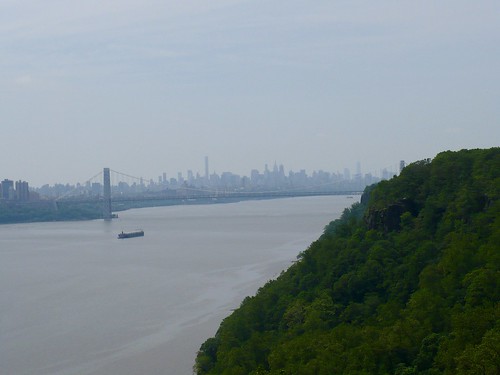 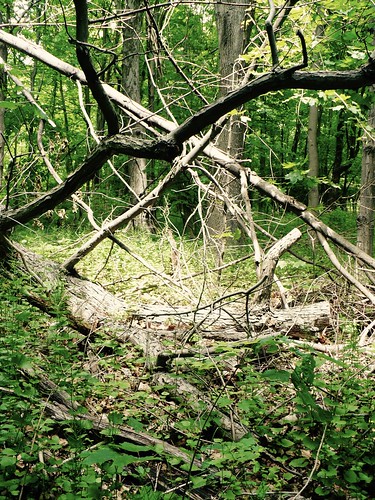 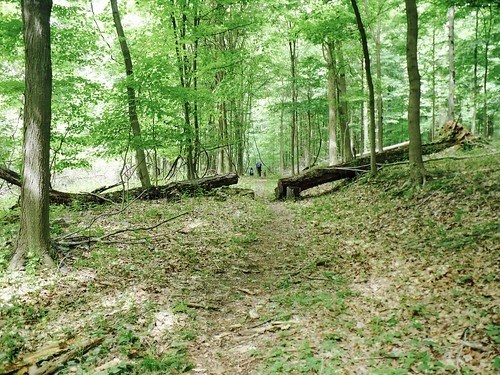 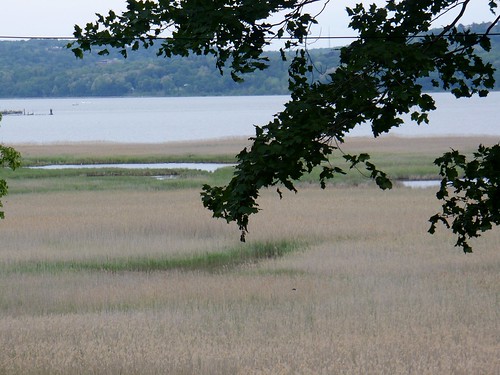 alar
She's dressed in every color of the rainbow, from an orange scarf down to sandals dotted in red rhinestones. When she poses before a spray-painted brick wall, the graffiti seems to unfold like wings from her body.

athletes
One of them has conquered water, the other air. They push at the bounds of what's physically possible.

chanciness
She's draped across a bench in an evening dress, a cluster of trees shading her from the morning light. She had gone to a party the evening before, and when it wound down, she hadn't wanted to go home. She spent the night walking until she wore herself out. Her dress shoes have demolished her feet.

confirm
To make sure I'm serious about my intentions to visit, she asks for a pinky promise. Afterwards, a hug.

frizz
He curls up next to me on the couch, his hair tickling my arm as the movie plays.

scouring
Her deep-cleaning skills are impressive. Decades' worth of grime melt away.

steamed
The night air is like a warm towel pressed to my face.
Posted by HKatz at 12:31 AM