Metal work and other art in Old Akko

In the city of Akko (Acre in English), one place we stopped by was David Miro: 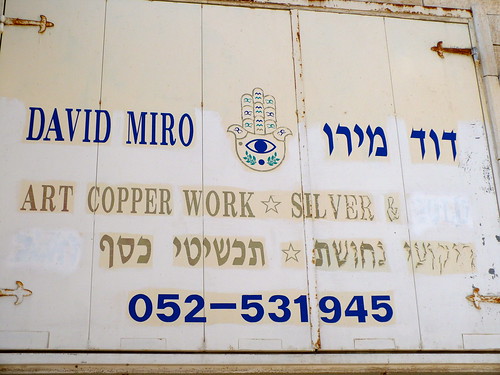 It's a family business (they moved to Israel from Iraq in the early 1950s). The son, who plans to lead the business one day as the next generation metal-worker, artist and craftsman, demonstrated how to make a simple copper bracelet. He then gave it to a woman in the audience. 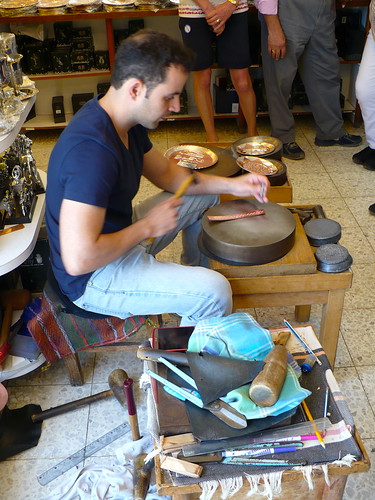 There's much more to see at the store. (I wound up not buying anything, but I admired a lot of what I saw.) 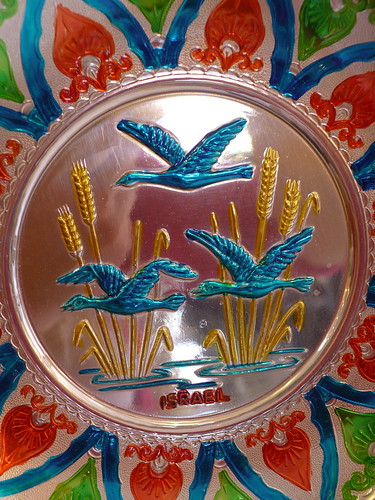 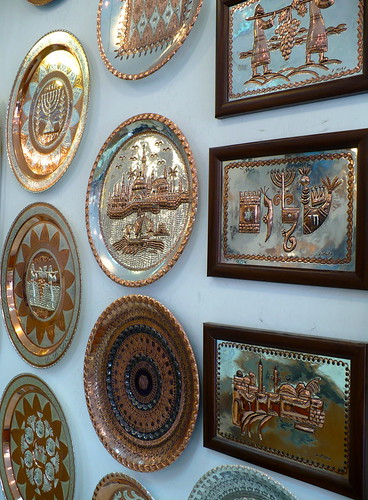 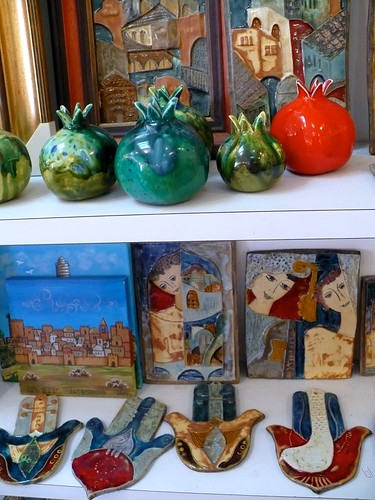 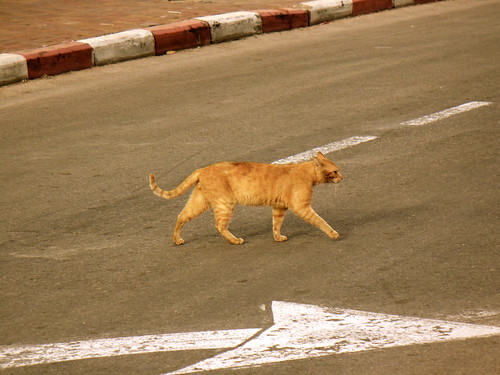 They're everywhere. And they're begging to be the main characters in stories about secret feline societies. 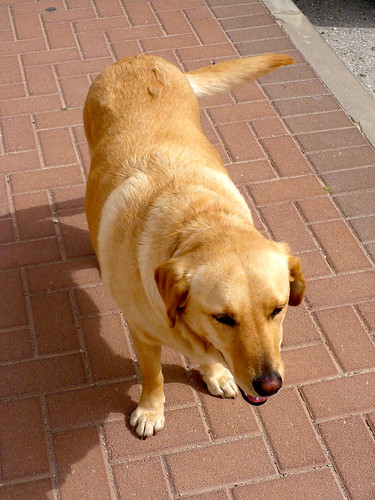 Her name is Luna. She belongs to a food vendor who's stationed in the Judean Desert, en route to the Dead Sea, at the point on the road marked 'sea level.' (You're traveling from the heights of Jerusalem to the Dead Sea, which is the lowest point on Earth - or at least on dry Earth. Reaching sea level is a milestone along the way.)

Luna is used to strangers, and walked over to everyone to get petted and photographed.

covert
She's hidden things behind her books - keys to cabinets, necklace pendants, folded letters. She says it's extra protection against casual burglars; they won't rifle through her shelves. But I also suspect it's her romantic streak. She's always wanted the kind of bookcase that would hide a secret, like a door that springs open when you pull out a volume of Donne's poetry.

demolishing
The book I use as a sledgehammer, to smash obstructions in my mind.

ducking
He has always crouched behind a shield. Currently, it's his wife. As long as he's with her, he's protected. No one looks too closely at him.

filling
Strange how the book leaves us both satisfied and empty.

olio
He has in his speech flavors of other countries. He's brimful of anecdotes about bodyguards and bugged hotel rooms, spicy cuisine and off-the-road ruins.

redolence
A begonia in a copper-colored pot, and a cup of orange spice tea.

reversals
Two months earlier, she was fine. Now she has health problems and a career in tailspin through no fault of her own. She speaks in disbelief about her life.

I came across this historical footage recently, of Marian Anderson at the Lincoln Memorial. It's from April 9, 1939.


By 1939, she had already enjoyed much professional success as a singer (of arias and other classical pieces, also spirituals), but in DC she wasn't permitted to give a performance at Constitution Hall, because she was black. So she sang at the Lincoln Memorial. (Here's more background about Anderson and the performance.) The footage here is just a small excerpt from the program.

empty
I work with words, I depend on them, but I can't find the right ones sometimes, not when I need them badly.

glossing
They're good at pretending. They'll bump her along from one grade to the next, while ignoring her anxiety, her disintegrating home, the bullies that wait for her in school corridors. Just as long as she passes, she's ok.

ramus
The tree has gone wild, stabbing its branches into the shingles as if it wants to pry the roof off the house.

replaying
Many parents forget what it was like to be a child. Without knowing it, they use parenthood as a way of re-enacting their own childhood. They might look to their children for what their parents never gave them. They might imitate their own parents and relish the power they finally have.

sweetening
She'll try to buy her way into their affection, or at least their sense of obligation.

tenterhooks
Two parents, a bassinet between them, stare at the doctor. They want more than his words. They want to read what his face gives away.

unravel
A game of Clue that starts with poker-faced "mmm-hmms" and ends with shrieking.

Three Stories with Flowers in Their Titles

Title: At the Time of the Jasmine
Author: Alifa Rifaat
Translator: Denys Johnson-Davies
Where I Read It: The Anchor Book of Modern African Stories

A son goes home to attend his father's funeral. The funeral rituals prompt people to pay their respects regardless of their feelings for the dead. And by serving as the basic steps for what to do, the rituals can act both as a guide through a difficult time and as a means to free people's minds from the details of what they need to do, so that they can consider feelings and questions they've long avoided.

The son had drifted apart from his father. Now he asks himself why. He also considers duty and love. What did his father feel towards him - some mixture of both? At the very least, duty maybe, but perhaps more. What happened to their relationship, and was the son also dutiful to the father? Jasmine - its scent and its significance to father and son - traces its way through the story.

Title: Blue Poppies
Author: Jane Gardam
Where I Read It: The Garden of Reading


"Mother had been staying with me for a month, sometimes knowing me, sometimes looking interestedly in my direction as if she ought to."

A woman and her senile mother seem to talk across each other a lot. She takes her mother to the old estate of a duchess and duke, where there's a field of blue poppies that maybe the mother has visited before but can't remember. Both noble personages are on the scene, though they don't much look the part of nobility; the duchess is gardening, the duke sits outdoors looking forlorn, and they've opened up their home to public visitors to raise money. In the course of the story, the duchess acts both as a force that keeps mother and daughter apart at a critical time, and as a means of giving some awkward, painful closure at the end. It's told with a light touch that still lets darker emotions like grief and regret seep through.

Title: Roses, Rhododendron
Author: Alice Adams
Where I Read It: American Voices
I like the sense of place in this one, and the rich details. As a child, Jane Kilgore moves from Boston to North Carolina with her mother, who has taken up selling antiques; Jane's father has abandoned them. After some exploration, Jane finds the home of the girl who will become her childhood best friend: Harriet Farr. Harriet's personal qualities, parents, and home are everything that Jane hopes she could have. Some years later, after Jane moves away, she realizes that she was more important than she could have imagined to Harriet and her family. The story explores the girls' friendship and how they've imprinted themselves on each other - and even years later, after they've moved away from their childhood and from each other, their friendship can linger and show them new things about themselves.
Posted by HKatz at 11:32 PM

bits
Floor-to-ceiling windows frame a cityscape that looks like the inside of a computer.

diminished
She used to strike me as formidable in social settings, able to charm anyone and steer a conversation to where she liked. This time she comes across as clumsy and out of her depth, as she cuts into other people's sentences or responds to them with expressionless politeness. I feel bad for her, and wish I had more social graces, to shield her.

permeability
Fiddling with a flute of champagne on the edges of a crowd.

pursuing
Her love of science, combined with her family's alarming medical history, have pushed her towards a career researching cancer.

shamed
On top of the mental illness is the stigma, keeping people from feeling human and connected with others.

sighing
His voice is weary when he greets us, as if he regrets remembering our names.

unsullied
On pristine plates, they present dollops of food - three elegant squares of ravioli, or three hillocks of rice with a spray of vegetables.
Posted by HKatz at 11:51 PM