For years, Howard Beale (Peter Finch) was a respected, level-headed figure in TV news, but he’s about to get laid-off for poor ratings. After he has an on-air breakdown, one of the network executives, Diana Christensen (Faye Dunaway), sees the ratings potentials of keeping him on. She convinces Frank Hackett (Robert Duvall), a hatchet man for the corporation that bought the network, to push for the Howard Beale Show, which turns into a major success. 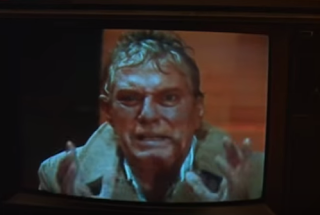 This is a funny and dark movie that can be painful to watch because so much of our current culture is in it, even though the movie was made in the 1970s. The Internet and other mass media are basically Network on steroids. Some thoughts on the film:

complimenting
She says there's something about me that draws people in a way that makes them want to talk, share their thoughts, and ask questions.

easy-peasy
"It's going to take more than one try," I tell the nurse who's about to draw blood. "No it won't," she says with a little smile. And she's right. For the first time I can remember, I'm not poked multiple times; she manages to find the vein in my arm and draw blood in one attempt. "This is amazing," I say, and she reveals her secret: she had spent 10 years working with babies. My skittish adult veins are no match for her skill.

inspection
Being peered at like this feels strange. It's an annual checkup, so it's expected, but it's still unsettling to get inspected from scalp to toes (where a mild subungual hematoma stains one nail).

negotiating
It's a short walk, maybe a mile or two, but it takes longer than expected. There are different conditions to negotiate, such as where to walk so the sun isn't always in my eyes, what to do about impatient, aggressive drivers who are blocking the crosswalks, and where to turn when the pedestrians' route is a thread through construction chaos.

rosily
In the middle of the aisle, a girl in a glossy pink skirt hugs a girl with golden ringlets.

roughly
The thunderstorm sounds like a throat being violently cleared.

self-awareness
They say they listen well, but keep interrupting the young man and telling him they don't understand him. Even as he tries to explain, they cut him off. When he trails back to his chair, they tell him they appreciate his contributions to the discussion.

cascading
The waterfall reminds me of a rich lather, soap washing away from a crystalline dish.

easeful
A few of us settle at a picnic table. The trees cast large, blotchy shadows. I eat some nuts and dark chocolate. Although we don't have a lot of time to linger in the park, we don't feel rushed.

mirror
There's an almost perfect stillness to the water. It bears the imprint of the sky, the clouds, and the hillocks covered in dark green trees.

pace
We trudge along the slick dirt trail, our breaths heavy, our bodies sluggish, and talk about automation and AI, the functions that sophisticated machines will take over.

swiftly
A deer and her children bound past us, the leaves crackling with their energy. A few seconds later, the leaves are still. The forest is quiet, as if we had only imagined them passing.

trade
We're city-dwellers in a small town on a Sunday afternoon, stunned at how many stores and restaurants are closed.

unaware
I find out, after the fact, that he had to go to the hospital. Everything turns out well, but it's still disturbing that I didn't know. I was working, sleeping, going about my routine as usual.
Posted by HKatz at 10:21 PM

Title: Casting the Runes
Author: M.R. James (Montague Rhodes James)
Where I Read It: The Weird: A Compendium of Strange and Dark Stories

This is an entertaining, creepy, and fairly straightforward story about revenge after academic rejection. A scholar turns down a paper about alchemy and subsequently gets marked for death by the paper's author, a deeply unpleasant man named Mr. Karswell. Karswell enjoys toying with his victim and encouraging dread and despair. (At one point, the victim, reaching for a watch, instead touches "a mouth, with teeth, and with hair about it, and... not the mouth of a human being." I like that – we don't know what mouth it is, but it definitely isn't a human mouth.)

Title: The Method
Author: Janet Fitch
Where I Read It: Los Angeles Noir

"The Method" has a well-written first-person narrator, Holly, who's a struggling actress. She meets a charismatic older guy who becomes her lover and also wants her to gain access to the decrepit mansion of an old actress. The reason he gives her is that some of older woman's possessions are valuable as memorabilia. But the story takes a darker turn, as the narrator realizes certain things about her new lover and the old actress. I liked the details about the mansion, and the way the story evokes the feeling of being faded and used up. A kind of solidarity develops between the two women, and the ending is intense and grim.

Title: The Victim
Author: P.D. James (Phyllis Dorothy James)
Where I Read It: Sleep No More

A man kills his ex-wife's second husband. I especially liked the descriptions of the route the murderer takes to commit his crime and the griminess of the home he lives in. The story is a good study of obsessiveness; obsessive people can be readily manipulated, especially if they're lovelorn.
Posted by HKatz at 9:51 PM

advising
With a confidence that comes from distance and emotional detachment, she advises her friend over the phone to end the relationship.

avidity
The band plays jazz by the green-tinted lake. Their most enthusiastic fan is a toddler in a stroller who complains when his parents try to roll him away.

bazaar
The basketball courts have become a bazaar for arts, crafts, and colorful clothes.

hello
She keeps her sunflowers tilted toward the front door, so when visitors step into her home, the flowers surge at them in a bright greeting.

twangs
He strums a guitar beneath a spray of wisteria. There's no melody, only spurting chords.

view
She has moved into her apartment below ground, and her horizon is a potted plant, a rodent trap, and a padlocked cellar door.
Posted by HKatz at 12:19 AM

accompany
When we take the dog for a walk, she trots open-mouthed, tongue lolling, and glances behind her every minute or so to check that we're all still there, not just the person holding the leash, but all of us, her pack of humans.

café
Ice crackling in a plastic cup, silverware rattling, a stream of tables with people chattering.

frantically
A dog tied outside the grocery store lurches to the end of his leash with eyes popping as each person who isn't his owner emerges.

gouache
The river is pink, gray, and yellow as the day fades.

masking
Her bright anecdotes are a barely adequate cover for her unease.

opposite
When she takes my passport photo, she tells me not to smile, so of course I smile and have a hard time stopping.

snaking
It's a sinuous trail. It dips in and out of the trees, bumps against the water, then flings itself inland through tall grass.

damply
She spreads her coat on the floor and invites two kids to squash up on it for a story. Raindrops squeeze from the coat into the carpet, as the pages of the picture book flip.

duodenum
I head deep into the belly of the store, which is full of glitter, stickers, crafts, and lines as long as intestines.

how
He says that after a tragedy people shouldn't ask 'why,' they should ask 'how.'

misdirect
They use arguing as a strategy of escapism. If they're full of outrage over one thing or another, they can avoid dealing with other emotions and underlying problems.

reticence
"What do you do?" they ask him. "I think of myself as a philosopher," he says, and seems to mean it. As he is silent for most of the evening, and gives brief, vague replies at other times, it's difficult to determine what he thinks about.

torn
He wants to grieve on his own. But he's also terrified of being alone at a time like this.

unmentioned
We're going to pretend that there's no reason (and maybe there is no conscious reason) that we haven't seen each other in a while.
Posted by HKatz at 3:28 PM

What did I read this past year that I recommend?

From the Classics Club Challenge list: Silas Marner by George Eliot, North and South by Elizabeth Gaskell, and Dombey and Son by Charles Dickens.

Other good novels included Home by Toni Morrison, which I wrote about here, and Someone at a Distance by Dorothy Whipple, where the writing is painfully lovely as the story unfolds of a marriage breaking apart due to infidelity.

For a light-hearted, funny novel, I recommend Cluny Brown by Margery Sharp; though it’s set shortly before WWII in England, it has little to do with the upcoming war, and focuses on the amusing characters, with most of the action in a country house and small neighboring village.

For detective novels, I read two by P.D. James that I liked, less for the mystery and more for the way she writes characters and scenes. They’re The Black Tower and Death of an Expert Witness. (Both of them feature Adam Dalgliesh as the detective.)

Just a couple of days ago, I finished reading The Ladies Auxiliary by Tova Mirvis, a novel set in the small Orthodox Jewish community in Memphis; a new arrival stirs up fresh life and energy, even as her presence causes underlying tensions in the community to surface as well.

Moving on to nonfiction. I recommend Sightlines by Kathleen Jamie, a collection of essays focused on the natural world. Also, Living an Examined Life by James Hollis, which could give you much to think about

Then there’s Voices From Chernobyl by Svetlana Alexievich, an oral history of the disaster told from a variety of perspectives; much of it is gut wrenching, how people struggled with the effects and the uprooting of their lives, how they faced the sickness and deaths of family, friends, neighbors, and colleagues, how much they knew or wanted to know, the lies they heard, the way some of them didn’t want to leave no matter what had happened to the land.

I also recommend No One Cares About Crazy People by Ron Powers. Powers provides an overview of mental health treatments (or “treatments”) in the western world and the present failures in the U.S. to help people suffering from schizophrenia and other serious conditions; many end up in jail, repeatedly hospitalized, or on the streets. Along with discussions of policies and attitudes, there’s the author’s personal story; both his sons developed schizophrenia, and one committed suicide. What would it take to improve mental health care, which is underfunded, fragmented, and full of misconceptions?
Posted by HKatz at 4:52 PM