At the heart of this beautiful movie is a boy who's unloved. Antoine Doniel's mother tolerates him, or tries to. His father is friendly with him, but they don't have a close relationship. At school, Antoine repeatedly gets in trouble. The one bright spot in his life is his friend, René, who seems a light and friendly spirit, out for some adventure.

The movie isn't melodramatic. It isn't always sad. For a boy of Antoine's age, there are pleasures and fun pranks. He can try to strike out on his own. During one part of the movie, he's staying with René without his parents or René's parents knowing; he's just dropped off the grid. He's walking a fine line between the pleasurable part of running away from home, the childish fantasy of it, and the darker side of it. Who at home cares that he's gone?

In the movie, there's a funny scene where a group of boys jog through the streets of Paris behind their gym teacher, and then in twos and threes they peel away, until the man is basically jogging on this own. That's the playful side of escaping authority. The movie also shows the dark and more desperate side of it. Antoine's truancy eventually leads to petty crime and lands him in a juvenile correctional facility. At one point, during an outdoor sports game, he flees. He's heading for the sea, which he's never seen. But once he's there on the beach, where else is there to go? Once you've reached the limits of yourself, what comes next? The sea no longer represents escape; it's another barrier.

Antoine can't run away from himself. All of his problems are seeded in him. He's long taken into himself the knowledge that he's unloved and unwanted, and he carries it everywhere. What can he make of himself when he has all of this in him? He doesn't need to think about it or talk about it for it to be there. The authorities offer him nothing. Whether it's the police or a psychiatrist or a teacher, they set up pens to put people in. What Antoine carries in him doesn't change, and what he longs for doesn't materialize.

At different points, he tries to take from other people to make himself free and whole, to reinvent himself perhaps or start over. He plagiarizes a paper from a famous writer and steals a typewriter to pawn off for cash. His experiences blur the lines between childhood and adulthood. If only he were an adult, that would mean freedom, because for most of the movie he hangs onto his optimism about adulthood as a liberating force. But take a look at the adults around him. In what sense are they wise or self-sufficient or free? He's running from them too and what they represent.

The movie starts with the camera prowling the streets of Paris. In the shots, The Eiffel Tower is always obstructed or glimpsed from strange angles. There is, from the start, a feeling of hunger. The camera keeps going down one street after another, but where is there to go? After he reaches the sea, Antoine has an expression on his face that says, among other things, "Is this it?"

encrusted
Thoughts of taxes are like barnacles I want to scrape off of my brain.

fancies
One of those wild days when we talk about ideas for hours. I feel closest to him then.

overbooked
He trudges along in his karate uniform, with a violin in one hand and a tennis racket slung over his shoulder.

price
Having a ready-made role to step into can be a relief, but what are you sacrificing for the extra comfort?

quailing
Their arrogance keeps them from confronting the fears that have hollowed them out.

yoked
This is the arrangement they've come up with: He's cut down on his leisure time, and she's compromised her dignity.

blank
For years, he hasn't dared to dream about anything.

chemistry
There are fascinating stories behind each element on the table.

dainties
Three small identical dogs, leashed to a bike rack, peer into the bakery that promises so many treats.

microscopic
Toddlers want to go at their own pace, examining sidewalk cracks and clods of dirt, and not just be tugged along all the time.

secure
Throwing pebbles, a child tries to knock birds out of a tree. Some twigs crackle, but the birds stick around.

unwasteful
With his finger, chasing the last of the whipped cream in the paper cup.

wavering
He continues to tip his chair back, frightened but excited about the moment of reckoning: a mastery of balance or a humiliating fall.

A couple of weeks ago, I took an awesome walk in Central Park, starting from the south, going north past the lake, through the Ramble, and alongside the Reservoir, to the Conservatory Garden, then the Harlem Meer, followed by an exploration of the North Woods. 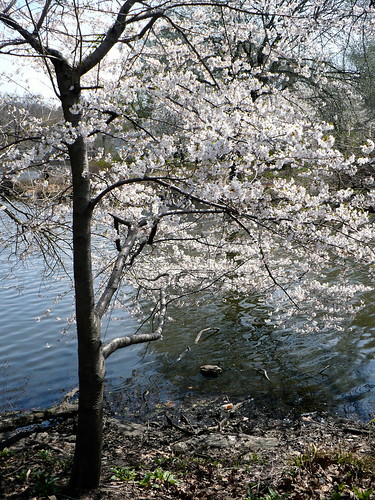 The view, when crossing an inlet of the lake to go into the Ramble: 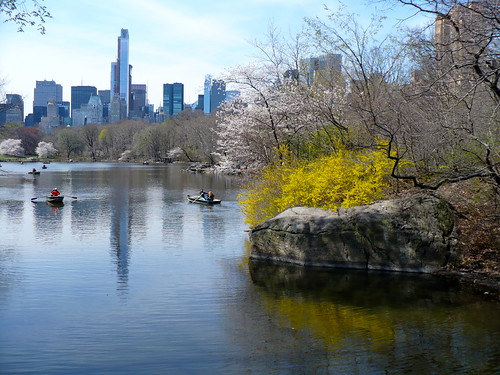 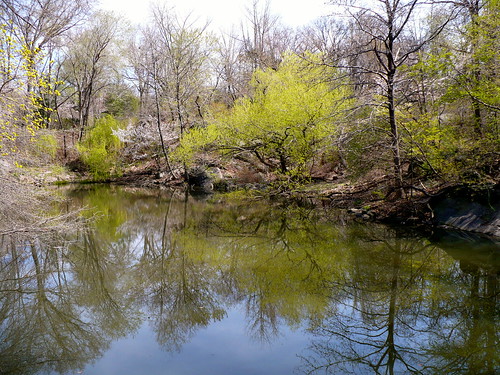