anterior
She wears a shapeless black dress. A shawl patterned with pomegranates covers her head and trails down her sides. She is standing still. For a few moments, I can't tell where she's facing.

anticipating
Books they can't yet read are open on their laps, as they imitate the adults around them.

breaths
I reach a tipping point where the room gets too crowded. People are starting to edge into the aisle and block the exit. I slip by them and out to the sunlight and cool air.

connecting
A phone call that fills an hour and more, and makes me feel like I'm soaring.

pennies
Leaves suspended in late afternoon light, against windows that have a copper shine.

recrimination
Where does your responsibility end and another person's responsibility begin? What are the best ways to map these boundaries fraught with guilt and anger?

red
The red chrysanthemums are the essence of red. They're strawberries and blood and fire engines.

In her essay, “Thinking and Moral Considerations,” Hannah Arendt writes:


Clichés, stock phrases, adherence to conventional, standardized codes of expression and conduct have the socially recognized function of protecting us against reality, that is, against the claim on our thinking attention which all events and facts arouse by virtue of their existence.

She writes that while it’s not possible to always be “responsive to this claim,” there are some people who seem unaware of it.

Arendt’s focus is on people in authoritarian states who acquiesce to evil and participate in it willingly. She doesn’t focus on deliberate wickedness, like how a sociopath or hardened criminal would act. She examines ordinary people who - in better times, under better governments - would strike you as moral in their day-to-day conduct.

attend
For the first time in a while, I give her a kiss on the cheek. I try to pay more attention to her anecdotes.

charitable
Bags of clothing mushroom out of the donation bin.

glisten
Sunset spattering peach and gold on the river.

improvise
She builds a zip line for her dolls, just because. This is one of the pleasures of childhood, the project launched on a whim after you've finished your homework.

outmaneuver
He's almost one. He's got a healthy baby face. As such, he needs to keep ducking away from people who screech Those cheeks! and dive in with their pincers.

source
She dozes off at the table and starts humming "Frosty the Snowman." When she wakes up, she asks where the music came from. A radio? No, it's not the right season for carols. Was it us, singing?

sunk
In a voice that bears a full freight of disappointment, he lists what he thinks is wrong with the world. The words are like stones thrown into my stomach.

broadened
Heading outdoors at night, to cars making slow, uncertain turns and buses sighing against the curb. I'm at peace with the world for the moment.

chew
The dish of eggplant parmigiana is about the size of a tire, and I'm too deep in good conversation to eat much of it.

generous
She doesn't hold a grudge, but welcomes everyone and gives hugs and kisses freely. Something in her remains relaxed in the face of how disappointing people can be.

thinning
In the upstairs room, most of the books are gone. In their place are pamphlets.

trooper
Some of the kids score goals or make clean passes that show they've been training. Other kids aren't as skilled, but at least seem to like playing. One boy has a hard time of it. He's kicked in the chest by an angry player from the other team (who gets booted out). Later in the game, the ball slams into his face. It's just not his day, but he stays in the game as long as he can.

zoom
A sunlit path, shrubs on one side, water on the other, and bicycles humming like wasps.
Posted by HKatz at 4:22 PM

account
Prayers, exuberant songs fill the synagogue. In the back, a woman who has a mental illness is bent over a book on her lap. Occasionally, she says something that sounds like, "But, but, but..."

emboldened
We brainstorm stories, and she becomes less timid with her ideas. She's worried that what she writes will somehow be wrong. The idea of mistakes not even mattering in a draft - that anything can go into a draft - is delightful to her.

grounds
We discuss repentance and how to keep it from becoming self-flagellation. Repentance is oriented to practical action - acknowledgement of the wrong done, and sincere efforts to make amends and to make changes to future behavior. Self-flagellation pushes people into purely emotional territory, where they give themselves up to their own sense of wrongness and get stuck in it.

recess
The front steps are the place to go for downtime. If there's a spare half-hour between meetings, and the sun is out, settle down. The narrow street before you becomes the world for a while. Read, close your eyes, maybe hope for an interruption from someone you like.

retrieval
For a moment, I think it's a real dog, dead or injured and floating in the river. But it's only a stuffed animal. Soon after, a boy comes running with his younger sister following. They find a short, spindly branch by the river bank to haul it in.

serenity
It's a peaceful evening, the clouds stitched to the sky in threads of peach and light blue. The wind carries sea salt on its breath. Leaves are murmuring overhead.

sloganeer
It's tacky to put the names of politicians on a kippah. But he likes to turn himself into a walking ad for his favorites.
Posted by HKatz at 12:18 AM

Last time I visited Governors Island was five years ago, when it was still in earlier stages of development and pretty eerie. In late June, I took the five-minute ferry trip from Lower Manhattan to walk around it again. There's more going on there now, and it's a lovely place to walk, bike, and picnic, play around on slides or zip-lines, and enjoy some art and history.

Highlights for me included the view of the NYC harbor from the area of the island known as The Hills. (The crowd of people in pink clothes were attending Pinknic, a rosé wine festival.) 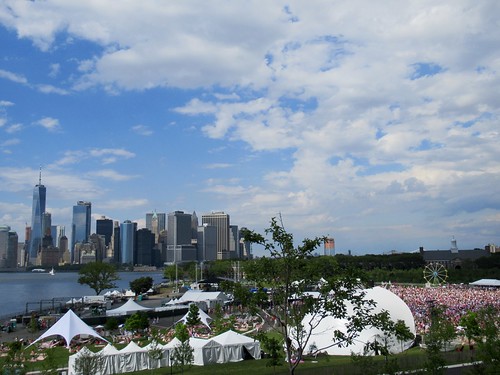 Another part of the island I enjoyed was the small urban farm and composting center. I was happy to see birds that aren't pigeons. 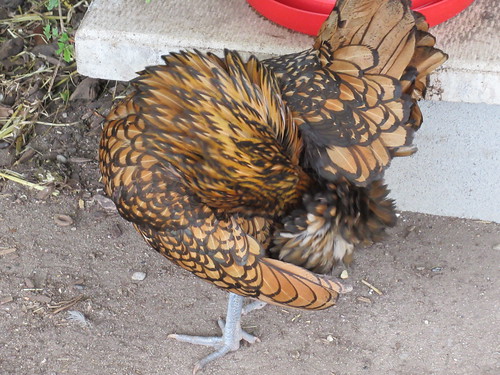 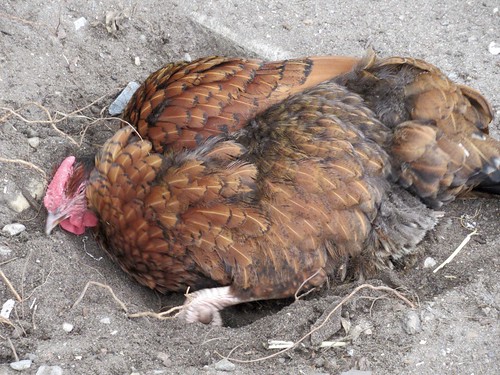 channel
Like many kids, he doesn't like writing. If only there were a program that could instantly convert his thoughts into coherent paragraphs. Instead, he has to grind the point of his pencil into his notebook and dig up each word.

divvied
One of the most companionable kind of dinners is when you and your loved ones demolish a pizza.

exponentially
When we've almost arrived at the solution to the math problem, I realize we could have done it in 27 or so fewer steps...

habitual
One sign the dog is on the mend is that she's getting yelled at again for eating toilet paper.

reunion
They spot each other at opposite ends of the room. One of them laughs, and the other flies across with arms reaching.

self-diagnosis
An insect bite of indeterminate origin. Should I worry? Half the sites say yes; the others tell me no, probably not.

throb
They're at a bar, and the beat of the music fills the space between them, helping them delay a conversation they'd rather not have.

Title: Going After Cacciato
Author: Tim O’Brien
Where I Read It: Breaking Into Print
A soldier stationed in Vietnam decides to walk to France. Other members of his squad try to stop him. Cacciato has a reputation for being dim-witted (a "rockhead," he's called), and his idea is absurd, but at the same time it doesn't seem all that crazy to try to get away, no matter how. The way they've been living so far, with comrades dying in gruesome ways and days full of pointlessness and ugly nonsense, it doesn't seem that crazy for someone to want to walk off into the distance. But that would be desertion, and the rest of them can't let him do that, can they?

O'Brien later developed this story into a novel, which I haven't read, but already in this story he fleshes out distinct characters - some petty and eager to kill, others more sympathetic and thoughtful.

Title: The Halfway Diner
Author: John Sayles
Where I Read It: American Voices
A group of women makes a round-trip by bus each Sunday to visit their men at a state penitentiary. The diner is the halfway point on the trip.

The bus is their world in this story. The women break into different groups, sometimes forming friendships, but what happens in the prison may affect their own relationships. To what extent will they take up the battles between their men and reenact it among themselves? The story unfolds through the eyes of one of the Latinas - who has a well-written voice - and I love how the inside of that bus becomes an entire world, and so does the dismal diner. Sayles also has a gift for writing female characters as realistic people, instead of walking bundles of cliches (the same holds true in what I've watched of his movies so far - Passion Fish and The Secret of Roan Inish).

drumbeats
Outside the supermarket, they gather at a giant cardboard box filled with watermelons. They tap on each one and explain the connection between the sounds and the quality of the fruit. The lesson soon gives way to the pure enjoyment of listening to what a watermelon sounds like when a small fist is knocking on it.

entreaty
There's no other sound in the room but his beautiful voice expressing contrition.

pugginess
At the veterinary hospital, the animals that are unwell are tucked into back rooms, while in the lobby, a large healthy pug trundles around like a greeter. He belongs to one of the staff, but carries himself with a proprietary air, as if he owns the building.

strategy
How have these two teenaged girls spent their afternoon? The evidence is on the table: homework, novels open facedown, a dog-eared fashion magazine, and a game of Risk Europe in progress.

tempest
The violinist bends like a tree lashed by a storm, the wind singing through her.

tenderly
The second movement of Dvorak's New World Symphony is one of the most beautiful pieces of music. It's a reassurance that, one way or another, all will be well.

tremor
The dog is shaky and crosses the room in tentative steps, her head down as she settles on my lap.