bedeviled
Up on the hill, she sits on a rock, stares at the ground, and silently battles her demons.

exhalation
Night is the best time to slip out. The air is breathable, the sidewalks are mostly empty, and the world is softer and more muted.

leaden
I miss out on a chance to reconnect with her, because a phone call seems like too much effort at the time.

priority
He will fail in part because his parents don't care enough about his success.

pupils
All of the stuffed animals are wide-eyed. Some look gullible; others look stoned. A few have clearly peered into the heart of the universe and discovered the mysteries therein.

sinuous
Romeo and Juliet embrace in the twilight.

tick-tock
They toss the baseball in an arc back and forth; it hits their mitts with a clop. Clop, arc, clop... like a metronome, keeping time at sunset.

8 stories from around the world

Title: The Black Cat
Author: Edgar Allan Poe
For as long as he can remember, the narrator in Poe's story has preferred the company of animals to men. He marries a woman whom he describes as having a compatible temperament, and she brings several pets into their home, including a black cat named Pluto who becomes his most cherished companion. However, being a Poe story, their harmonious home life isn't meant to last, and the peculiarities that had set the narrator apart from his peers at a young age now take a darker turn. He becomes a violent alcoholic, and though he lashes out at his wife, she remains for the most part in the shadows of this story, mentioned now and then but taking second place to Pluto, who bears the brunt of his cruelty.

What follows is torture, murder, and walled-up bodies. The story is told in a first-person, mentally unhinged narration, a Poe specialty (though this character is unique, not a repeat of other narrators). I love how The Black Cat conveys the perverse joy people take in damning themselves; they know that what they're doing is wrong, but do it for that very reason ("the unfathomable longing of the soul to vex itself"). And it's also a tale of domestic violence. The wife, subtly erased, is only mentioned now and then (almost as soon as we've forgotten she exists - until we can't forget any more); in a strange way, as the narrator strikes out at his cat, I also sensed he was striking out at her, where she stood in the shadows.

combative
He cuts a path for himself through the crowd by alarming people, shoving his face into their faces and talking loudly to himself, as if they aren't real outside of his mind.

foothold
So much of conversation is aimed at establishing and defending one's status, saying what we think is important to other people and what will help us play the role we've assumed in our social circle. In the meantime, other thoughts fight to get out and are smothered in self-censorship.

gypsy
The dark river wears glitter on its face.

insufficient
So much of what happens between these bookshelves is an exercise in getting by with a bare minimum of effort and time.

intelligence
Although I don't know it at the time, he's testing me. His reserved and polite demeanor masks his watchfulness; he notes my mannerisms, gets a rough idea of my temperament. I don't think he's doing this consciously. But he'll use his discoveries to his own advantage next time we meet.

protean
Fireworks in the shape of dumbbells, weeping willows, and badminton birdies.

repairing
He talks about how we need to put the broken pieces of ourselves back together.

One of my favorite blogs is going on hiatus

But it will still stay up on the web. So be sure to bookmark Robert Frost's Banjo and enjoy the music, poetry, and other delights.
Posted by HKatz at 11:37 PM

Email ThisBlogThis!Share to TwitterShare to FacebookShare to Pinterest
Labels: blogs

Please Give (2010): What do these characters really want to give? What can they give?

In Please Give, the characters struggle with emptiness or guilt, and often latch onto superficial relief for their problems; they may be bored with themselves and looking for quick fixes to make them feel important and needed. For instance, let's look at Kate (Catherine Keener) and Alex (Oliver Platt), a middle-aged couple who own a furniture store where they sell mid-20th century pieces. The way they acquire their goods is by showing up at the homes of people who've recently passed away and buying the furniture at a bargain price; they then resell at thousands of dollars in profit, because their customers think that ugly 1950s end tables are trendy. Recently, they've also purchased the apartment of their cantankerous next-door neighbor, Andra (Ann Morgan Guilbert); she's over 90, and they're waiting for her to die so that they can break down the walls between the apartments and renovate. 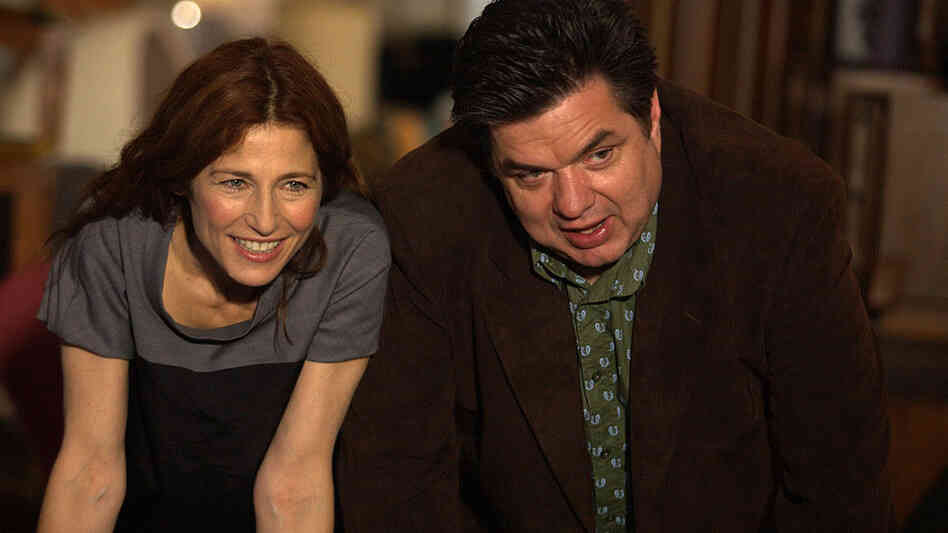 Nonfiction Book of the Month: A Lady's Life in the Rocky Mountains

Isabella Bird was an Englishwoman who traveled to remote corners of the world in the second half of the 19th century; she became the first female member of the Royal Geographical Society and wrote extensively about her travels. Unusually, she traveled alone, and in A Lady's Life in the Rocky Mountains, she gives vivid and frank descriptions of life in the Rocky Mountains when they were first being settled; she visited there when she was in her forties.

She roughed it, sleeping in the homes of settlers, in dilapidated cabins, and sometimes outdoors; wherever she went, she worked alongside her hosts, assisting them with their chores. She was an accomplished horsewoman, braving bad weather and spotty trails on horseback, and at several points helping people round up cattle; most of the time she didn't ride sidesaddle, but seated herself as a man would. She wound up befriending a desperado, "Mountain" Jim Nugent, who helped her ascend Long's Peak. All of her writing renders the natural world beautifully, but even when she's in raptures over a particular location (such as Estes Park), there's always a steadiness to her work; you could tell she had sharp eyes and a good head on her shoulders. She comes across a variety of people in the Rockies and on the bordering Plains, and makes an unsentimental analysis of settler society, both the favorable and unfavorable qualities of it.

The book - a compilation of letters she wrote from the Rockies to her sister back in England - is a treat, for its literary and historical value. So dive in and travel alongside her:

There were snow patches, snow slashes, snow abysses, snow forlorn and soiled looking, snow pure and dazzling, snow glistening above the purple robe of pine worn by all the mountains; while away to the east, in limitless breadth, stretched the green-grey of the endless Plains.

cornered
The more she runs, the more the dog chases her, until she's finally curled up in a ball on the couch giggling as the dog licks her ears.

corpuscle
I open the door and startle a cardinal into flight. It glides across the pavement like a drop of blood.

evasive
Fireflies dip in and out of the hydrangea bushes.

phonological
The voice recognition software built into my computer twists my words out of shape sometimes, but for the most part it's very helpful. What I need to get used to is speaking aloud as I work; how will it affect my writing on the occasions when I use it?

pseudo
The tomato sauce on the pizza bagel is a watery paste, something tomato-ish, and I can still taste the cold bite of the freezer at the heart of the bagel.

scaled
Plastic animals camp on the windowsill. They've crossed the cool plain of the air conditioning vent and now have an unbroken view of metal and concrete canyons.

subjective
After finally turning off the TV, they start up a drawing contest and ask me to be the judge. It feels weird though to assign scores to their artwork, and they get exasperated with my reluctance.
Posted by HKatz at 3:20 PM