[Note: I finished writing this 'week in seven words' last night and was prepared to post it earlier today. I then got the news that my grandpa passed away. After this post I plan to take a week off or so from the blog.]

digestive
During the main meal of the second Seder, we decide to take a break after the soup and salad. A break from eating. All holiday we've been eating. So we stop for a game of Scrabble, keeping score in our heads.

patella
A moment of weightlessness before my left knee hits the concrete.

sight-seeing
From 66th street I walk down Broadway to the southern tip of Manhattan. Along the way I get the different flavors of a single street. Midtown's large commercial buildings with glossy windows. The frenetic ads and crowds in Times Square. Further south, Macy's, construction, small businesses topped by apartments, a few parks and squares floating in a cloud of pink blossoms. NYU's campus, more stores (some closed and papered over), the horizontal streets no longer numbered. Old Manhattan - churches and graveyards, Wall Street, then Bowling Green and Battery Park. Beyond that the harbor, gray and windy.

still life
The tulips and lisianthus glow in the lamplight.

vicarious
One evening I'm introduced to a Batman Lego video game. I don't get it. Why not just have a regular Batman? This Batman looks like a Lego figurine, and you can press on buttons to have him build stuff for you on the screen. But it's not as if you're the one building anything. I guess I don't understand the point of a Lego product that doesn't involve the manual manipulation of pieces.

windblown
At Bowling Green the wind combs through the red tulips and flattens them alongside the fountain.

The song in the video, sung by Sophie Milman, is "Eli, Eli" - a poem written by Hannah Senesh and set to a melody composed by David Zahavi.

Senesh (1921-1944) was a Jewish parachutist who was captured by the Nazis and their collaborators in Hungary in 1944. After subjecting her to months of torture, through which they tried and failed to get information out of her about her mission, they executed her by firing squad.

Here's an English translation from the Hebrew of "Eli, Eli":

My God, my God,
May these things never end,
The sand and the sea,
The murmur of the water,
The lightning of the heavens,
The prayer of man.

Springtime in the streets of Philadelphia 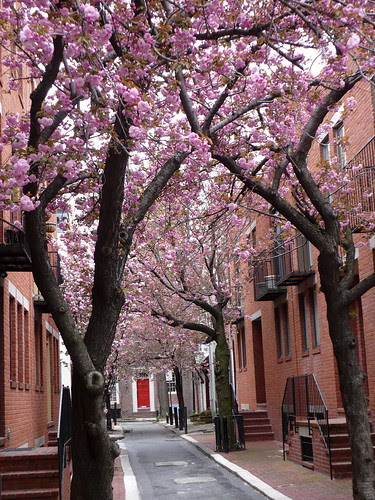 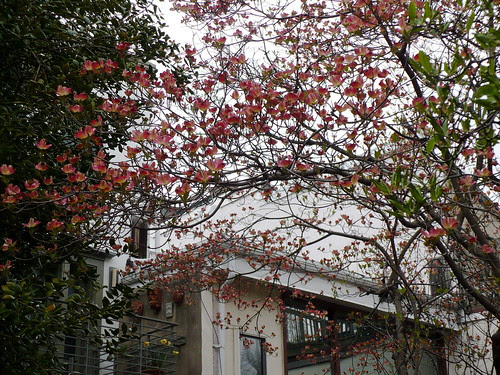 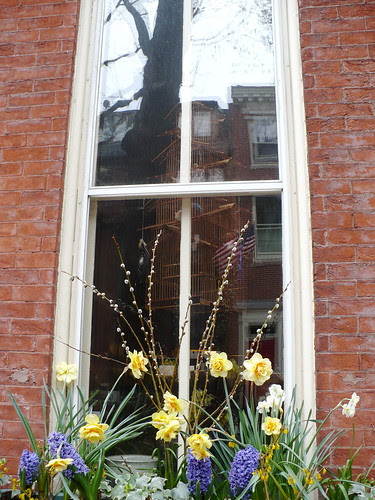 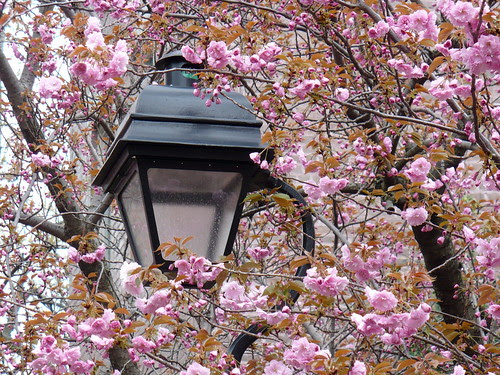 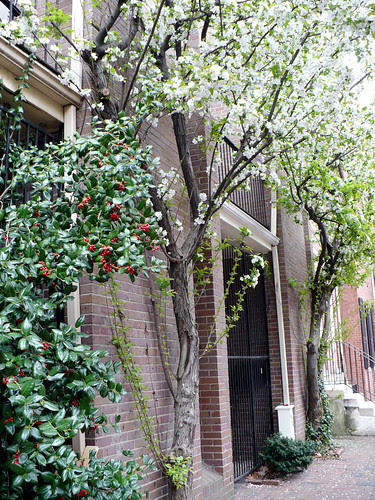 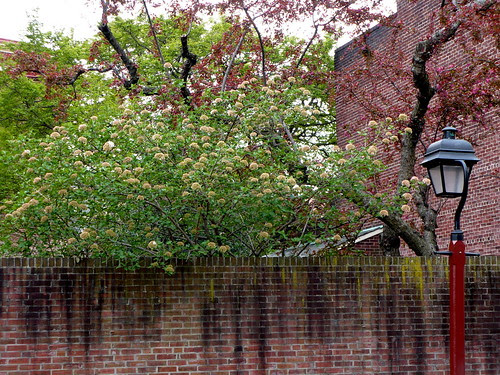 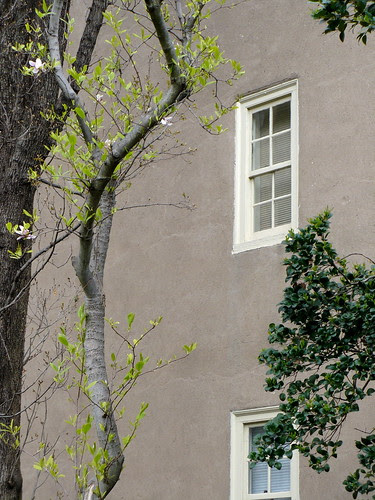 banqueting
The meal reminds me in some ways of a medieval feast. There are story-tellers, singers, a court jester, knights clashing from time to time in a joust. A dog wakes up from its long nap beneath the table to lap up flakes of matzah from the chairs and floor.

chef de cuisine
All day she's in the kitchen cooking, and here and there we jump in and help her, though for the most part she wants it to be a solo operation. She takes pride in her ability to single-handedly cater multiple feasts. There's chicken, lamb, beef with yams, and turkey, potatoes with prunes, matzah ball soup, glazed carrots, broccoli, beets, and Brussels sprouts. Charoset too (apples, bananas, nuts, wine, cinnamon, and a little honey mixed together in a blender). Am I leaving anything out? Salads, can't forget those. Anything else? Probably.

inflorescence
Many streets in downtown Philly have become gardens. The narrower ones have a roof of pink blossoms. Daffodils grow from windowboxes, and cherry trees spread their branches over brick courtyards. By the side of an unpaved parking lot tulips have sprung up.

kneydlekh (קניידלעך)
Matzah balls made from scratch with a family recipe are addictive, full of fluffy doughy goodness.

patellae
In a battle of Lego figurines, my knees are a part of the terrain. Opposing forces stand on them and lob incendiary Lego weapons at each other.

undervalue
They're real flowers, but in their surroundings they seem fake. Planted next to racks of designer purses and sunglasses and aisles that smell of perfume and new shoes, their tropical colors have the luster of plastic.

As part of Short Stories on Wednesday, which started at Breadcrumb Reads and is now at Simple Clockwork, I wrote a flash fiction piece, "Emptied."

If you follow the link to the post be sure to check out Simple Clockwork, which is an excellent blog with reviews of books and short stories, guest posts by authors, and pieces of original fiction written by Nancy Cudis. Thanks, Nancy, for posting my little story.
Posted by HKatz at 3:05 PM

Good Short Fiction: The Swimmer, Tomorrow and Your Arkansas Traveler

Title: The Swimmer
Author: John Cheever
The Swimmer gets darker as it goes, slipping from a golden summer day to a cold nightmare. It starts with Neddy Merrill - a husband and father, a man in his prime - sitting at a friend's poolside on a beautiful summer afternoon. He hits on a crazy and fun idea: to swim the several miles back to his own house. He would do this by traveling through a string of backyards and swimming across people's pools. In his head he plots out a map of backyards belonging to people who know him and wouldn't mind him passing through their property.

Everything goes swimmingly at first - he's welcomed by everyone, and the weather is warm. Swimming through the pools in one yard after another makes him feel alive. But then a chilling atmosphere starts to creep into the story. Some friends and acquaintances aren't at home or are unhappy to see him. He's brought up short by a highway he forgot to include in his mental map. A storm is coming and the air is getting colder:


It was suddenly growing dark; it was that moment when the pin-headed birds seemed to organize their song into some acute and knowledgeable recognition of the storm's approach.

At some point the story shifts from feeling solid and real to being a dreamscape where Neddy experiences ruination. The relaxed confidence he feels at the start, when he's healthy and secure in his well-to-do community, gradually gives way to disorientation and darkness. Seasons pass by instead of hours in a lazy afternoon. This makes the start of the story seem like an illusion, a pleasant summer interlude that was never as real as it appeared. Or even if it was real, it was insubstantial; Neddy's good fortunes don't survive the journey he takes.

Is all of this taking place in his head? I could see these events play out in the mind of a man who's institutionalized or close to death as he retraces the decline of his life. The journey, in which realistic events are seeded into a dreamlike world, represents his life's reversals. Cheever's story is haunting. No one feels secure in it - not the main character or the reader.


Uncle Gavin says it don't take many words to tell the sum of any human experience; that somebody has already done it in eight: He was born, he suffered and he died.

The narrator's Uncle Gavin is a lawyer who wants to understand why a single juror, Jackson Fentry, brought about a hung jury in a recent trial by refusing to acquit the defendant. He takes his nephew along for an investigation in the hill country where Fentry lives in poverty, his appearance "at once frail and work-worn, yet curiously imperishable." There he uncovers a depressing story about two people who might have had a better, more worthwhile life had they not been torn apart.

Uncle Gavin describes the lot of "the lowly and invincible of the earth - to endure and endure and then endure, tomorrow and tomorrow and tomorrow." Hanging the jury was probably the closest Fentry came in his life to administering justice, or something resembling justice; even then it was mostly a useless gesture because it couldn't bring about redemption or restore what was taken from him. This is a bleak and powerful story, and though Uncle Gavin's interest in Fentry stems from professional curiosity instead of personal concern, I like that he and his nephew become witnesses to Fentry's life.

Title: Your Arkansas Traveler
Author: Budd Schulberg
Larry "Lonesome" Rhodes is an American media sensation, a celebrity who's styled himself as a simple man with wholesome rural values and good plain commonsense. He sings a little, spins yarns about the funny but decent folks he knows from home, and dispenses advice to his devoted listeners. The only person who really sees through him is his assistant and manager, Marcia, who helped him become famous:


I made a futile effort to explain: he was no more the voice of the people than I was, with my corrupted Vassar accent. In the sheep's clothing of rural Americana, he was a shrewd businessman with a sharp eye on the main chance. He was a complicated human being, an intensely self-centered one, who chose to wear the mask of the stumbling, bumbling, good-natured, "Shucks-folks-you-know-more-about-this-stuff-'n-I-do" oaf.

Marcia acts at various points as his personal assistant, manager, agent, business associate, therapist, and mother. What she refuses to become is his mistress (or wife). She gets him contracts, keeps him propped up through personal crises, and struggles with his increasingly out-of-control behavior:


Our suite with money and wine and women and worried executives and slave writers and stooges was just about as close as you can get in this country and this century to the ancient splendors of the Persian kings.

She starts to feel dismayed by her role in his success, how she's helped a fraud become a national voice. What also bewilders her is people's willingness to blindly adore him and keep him in the spotlight. Admittedly Lonesome manages to do some good for some people. He also tells them what they want to hear; he plays on their white-washed imaginings of a simpler past inhabited by simpler people. As the story unfolds he uses his power in increasingly reckless ways, something you see over and over again with politicians, celebrities, demagogues and other charismatic manipulators. His public image becomes too inflated for him to handle with any sense of proportion. When he finally goes down only Marcia is there to witness it.

Other stories from this anthology can be found here.

auriferous
A movie night with a paranoid Humphrey Bogart, a motor-mouthed Walter Huston, and a gaggle of bandits and burros.

crated
The first stages of packing: DVDs and CDs in shoeboxes and books in Yaffa blocks.

paradoxical
I sometimes become the sort of person who isn't at peace unless she has something to worry about.

patties
We sit down to a meal of hamburgers and coleslaw. Our conversation unfolds mostly in variations of "mmmm, this is the best hamburger ever!"

possessed
The black plastic bag dances in the wind like an imp, taunting the customers at the café.

ruffled
A cold wind blasts into the city, agitating litter and telephone poles.

unhinged
The afternoon takes a turn for the absurd with a hunt for a new toilet seat.
Posted by HKatz at 2:44 PM

"Feed me or die," said the demon goose. 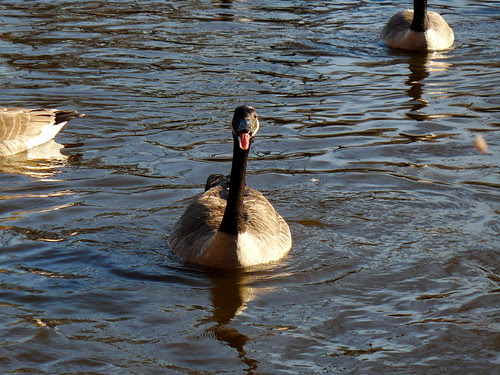 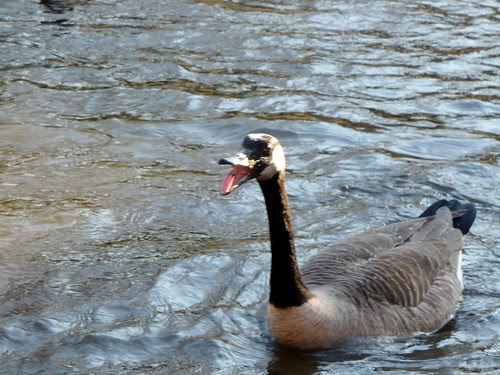