"Insanity runs in my family. It practically gallops."

So says Mortimer Brewster (Cary Grant), a drama critic who at the start of the movie gets married to Elaine Harper (Priscilla Lane) after years of confirmed bachelorhood. En route to their honeymoon, they stop by the house of Mortimer's kindly old aunts, Abby (Josephine Hull) and Martha (Jean Adair), who are known in their community as generous women, donating toys to poor children, visiting the sick, and performing other charitable acts.

As Mortimer discovers, after a look under their window seat in the front parlor, their idea of charity also includes killing off lonely old men. It takes some time for Mortimer to wrap his head around the fact that his aunts could be doing this.

Up until that point, Mortimer had assumed his family's madness was confined to his older brother, Teddy (John Alexander), who believes he's Teddy Roosevelt - and that his family's darker impulses were confined to his other brother Jonathan (Raymond Massey), a sadist who hasn't been seen in 20 years (but of course will show up, with Peter Lorre in tow to up the creep factor).

Meantime, Elaine - who doesn't know what's going on - is wondering why Mortimer suddenly seems so absent-minded and panicky, so unready to embark on their life of wedded bliss. (When there are too many bats in the family belfry, is wedded bliss possible?)

"Arsenic And Old Lace Poster". Via Wikipedia.
Priscilla Lane has a thankless role as a woman who spends most of the movie getting shoved aside and bodily carried out of rooms. As for Cary Grant, his performance took some getting used to because it was too hammy (like, huge double-takes and expressions of HUH?). The other actors, especially Hull, Adair, Massey and Alexander, were spot-on in their roles. Also, Jack Carson in the role of a friendly but oblivious policeman.

It's a strange, funny dark comedy, which frays at the end like many comedies. There are hilarious scenes, numerous twists, and jokes that take time to develop and pay off. Fun for any time of year, but especially Halloween, if like me you prefer to avoid gory slasher/monster movies.

Here's a blueprint for a brilliant hike in the autumn.

Take the Metro North from Grand Central Station in NYC. The view from the train window, the Hudson River: 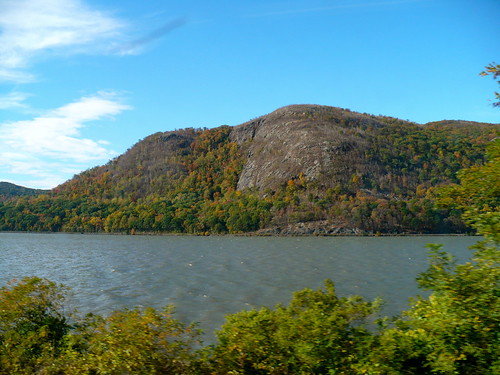 Get off at the train station in Poughkeepsie (last stop on the Hudson line): 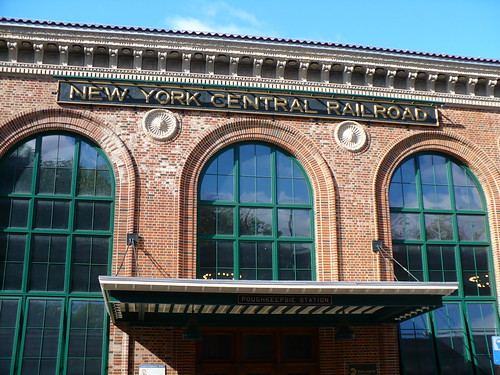 Walk south, paying attention to what some of the buildings are called. (Washington Irving is a major literary figure in these parts.) 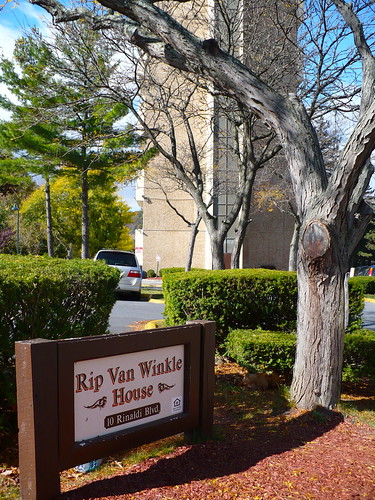 Cross the Mid-Hudson Bridge on foot (this isn't the famous pedestrian bridge in the area, but it has a footpath, so you can share the bridge with motor vehicle traffic). 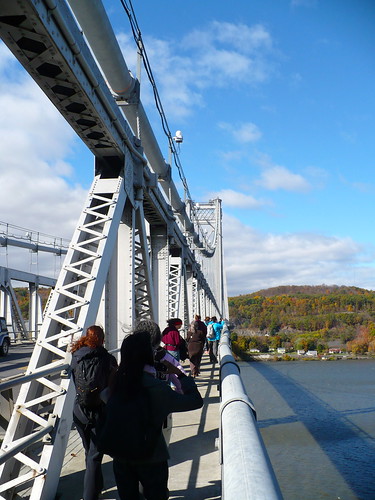 Look at different signs on the bridge. 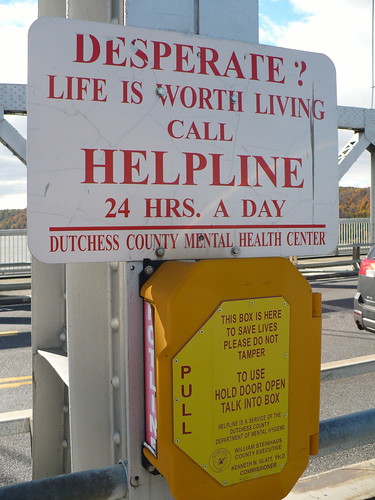 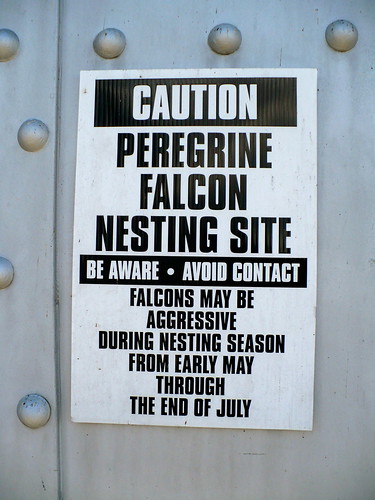 Then look north along the Hudson.

Because that other bridge you see? That's the Walkway Over the Hudson. It's the longest elevated pedestrian bridge in the world, and it's where you'll be ending your hike. 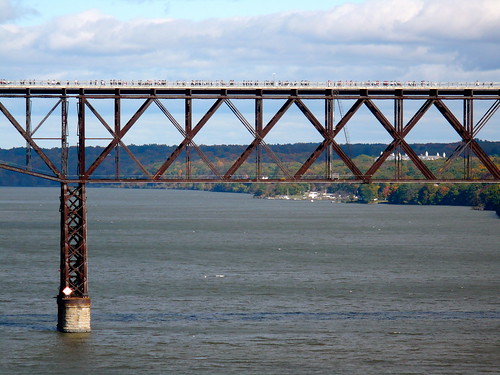 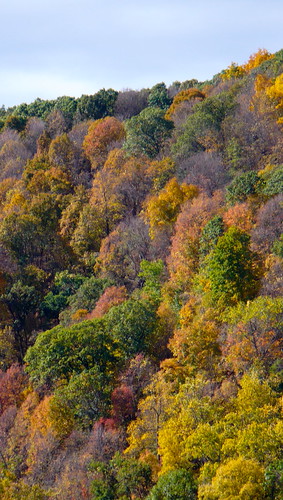 amazon
Stolid and tall, drifting ahead of us like the mast on a ship.

dyed
Red and yellow kayaks, like slices of fruit candy, bobbing on the river.

fissures
They work hard to create the impression of a shared reality, even as their hearts splinter.

grousing
We have no solutions, only complaints. But it's reassuring to find people who complain about the same things. The shared noise is heartening.

haunting
The whine of pigeons flapping by my ears.

mutants
Fisherman by the railroad tracks, what will he find? Rubbery fish? Tires that have come alive with fins and scales?

refrigerated
Harried women in a chilly supermarket; they're carefully made-up, their eyes fogged.

attenuated
In a battle that spans multiple eras and realms, who will win: Plants or zombies?

embracing
The pond is still and lets the sky steal across it. It's a safe place for the sky to settle down a short while. No waves or ripples will chase away the clouds.

fidgety
Goal: To rush to the end of the piece and then dance away from the keyboard.

fretting
One trait I want to avoid as much as possible is fretfulness. I don't want to lie prostrate before my fear and call attention to myself with it.

inexorability
He had the vague hope that if he stopped doing anything, time itself would stop. Instead it's flowing around him and nudging him along, while he struggles to keep his footing.

regenerating
I like community gardens grown in old broken places. A scarred part of the city now bears vegetables and redolent plants.

(From a half-day visit on Columbus Day.) 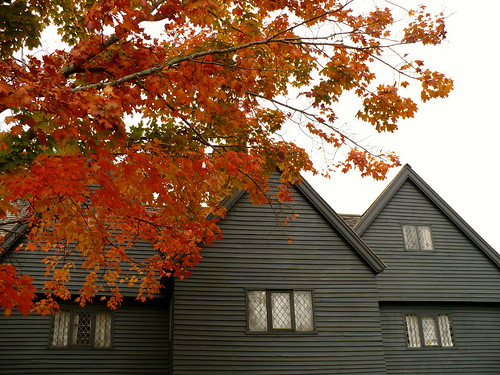 (It's the home of Jonathan Corwin, one of the judges involved in the Salem witch trials of the late 1600s.) 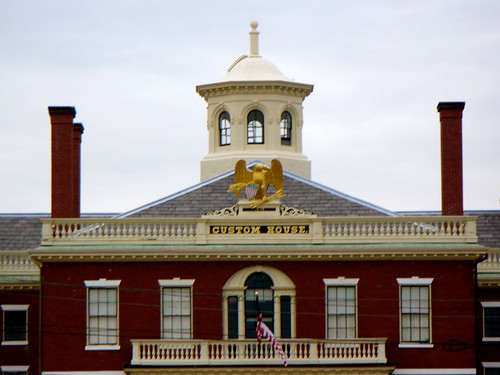 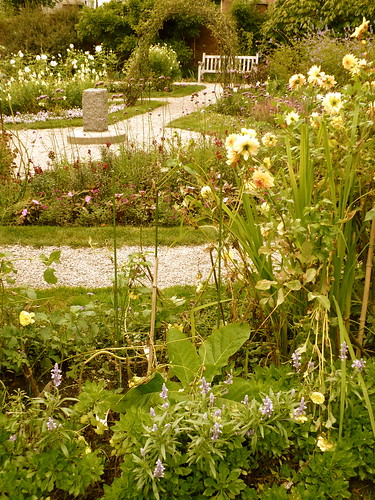 gazers
Three teenagers are sitting on a bench, arms around each other, looking for the moon in a daytime sky.

heightened
The silence on the path isn't true silence. The trees are bristling, and animals are scraping unseen against dirt. My feet are crunching on loose rock. The silence is the absence of human voice.

platitudinous
People who tell me to "be myself" often mean "be a self that I approve of and am comfortable with."

punctuating
When I read beneath the green branches, bugs fall onto my book like extra punctuation.

subterrestrial
In part because it's dwarfed by a flag pole, one gets the sense that the old stone building, crouched on the ground, has a small room in it with a door, and that this door opens to a flight of stairs that takes you miles below the city.

witchery
The shop, dark as a cavern, smells of soap and herbs.