In Contact, Dr. Ellie Arroway (Jodie Foster), who for years has been involved in a search for extraterrestrial life, gets to make face-to-face contact with an alien.

It's a disorienting sequence of events, with ambiguity as to what happens (and how it happens). It's also the most visually beautiful part of the movie. Arroway, committed to recording what she is seeing as she glimpses new parts of the galaxy, is almost robbed of speech by how magnificent everything is. With tears in her eyes, she talks about how officials should have sent a poet to be the ambassador of humanity. Maybe a poet could have found words, though I think a poet would have been overwhelmed too. I especially liked Foster's performance in this sequence; it was moving. 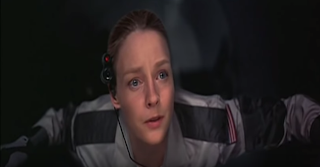 The moment of first contact itself is part of this resplendence. It's a gentle connection, full of beauty and wonder and humility. The being she encounters assumes the form of her father, who passed away when she was a child, and this image becomes a metaphor of how this alien species views humans. The aliens are more advanced and mentor-like (though not close to all-knowing); the humans are fledglings, not yet prepared to become part of the web of species that have established communication with each other.

I smile thinking about how a movie involving an extraterrestrial experience makes you appreciate humanity more, as brutish and arrogant as we can be. (What's likely the first sign of us that aliens pick up is a broadcast of Hitler's speech at the 1936 Olympics.) The movie celebrates the potential of humanity, and not just our potential for destruction.

I liked the portrayal of science: the enthusiasm, obsessiveness, long hard slogs, and careful thought and preparations. Also the fight for grant money, and the stress of dealing with politics and with other people sliding in to take attention and credit from you. (As in The Silence of the Lambs, Jodie Foster plays a woman in a field dominated by men and fed up with the politics and power plays.)

Contact also discusses faith, the awe and humility in faith. The main proponent of faith and religious belief in the movie is Palmer Joss (Matthew McConaughey). McConaughey's performance is mostly about looking calm and wise, and Palmer's function is mostly to remind Ellie that there are different kinds of "unknown" and "unseen," and that science alone can't provide guidance about developing a meaningful life. (He also isn't "anti-science.") Humility and a sense of wonder are (or should be) a part of faith and a part of scientific discovery; we are questing beings – humble, thoughtful, and courageous at our best.

catastrophizing
My mind is gripped by the potential mistakes, the possible costs, the hypothetical scenarios where things go terribly wrong.

chary
It's a social event where no one is at ease. People are sizing each other up, suspicious and assessing.

enclose
A homeless man has set up a small room made of blanket walls by the doors of a supermarket.

examining
Giving more thought to a chapter that portrays a slide towards despair, a character contemplating an end to her life. I check that I'm writing it with sufficient care.

hand-to-hand
Looking both embarrassed and proud, he talks about how he allowed himself to get really mad and fight a few other men at a subway station, just because he needed to relieve stress. I had never pictured him as the type to let off steam through physical combat with potentially lethal repercussions, a situation where someone could end up knifed or knocked onto the third rail.

untainted
A clear, crystalline day when the air seems to come from a fresh spring untainted by car exhaust and sidewalk garbage.
Posted by HKatz at 10:18 PM

corporate
She prefers working for a smaller company. The larger corporations demand too much conformity.

doe-eyed
The room has deep red wallpaper and animal heads mounted on the walls. Nothing else.

gerunds
I'm looking through picture books for a gift, and it amazes me how skinny books with simple illustrations and one word per page ("Running," "Flying,") have double-digit price tags.

illumination
He returns to the topic of his anger, and how he wishes he had learned earlier in life a whole vocabulary of emotions. To be able to put words to his feelings would have helped him stave off the outbursts that derailed his career. It's never just about words; it's about understanding yourself, the source of your feelings, and the options for how to act.

net
The branches of the bare trees form a diaphanous net that catches the sunlight.

uniform
From many windows, the same game is flickering. One large TV after another, mounted to a wall and dominating a room with the same shots.

arrival
I need to curb my impatience and allow him to arrive at an answer. He needs to think quietly, then have the time to explain and evaluate his conclusions. I don't want to immediately jump in and tell him what's wrong. He needs to work through it.

disengaged
For most of that one day, I look at the rest of the world as if from another dimension.

pigeons
As she walks, she tosses crumbs from a plastic bag. Pigeons fly in from all around. Their wings make splatting sounds, and they land in a bristling crowd on the sidewalk.

selfies
There's a cleft in the rock, and it overlooks water, trees, and shimmering buildings. People take turns standing in it for selfies. It's practically a photo booth.

squirming
They negotiate eating a pizza outdoors, in an atmosphere of tension and discontent. The seats are uncomfortable. The napkins fly off.

stark
She's unliked, unloved. Maybe deep down she realizes how much, and it hurts to see.

stentorian
A woman uses a bullhorn to remind the kids on the playground, "Keep your coats on."
Posted by HKatz at 10:08 AM

Nine Short Stories That Involve Friendship in Some Way

Title: The Devoted Friend
Author: Oscar Wilde
Where I Read It: The Happy Prince and Other Tales


"'There is no good in my going to see little Hans as long as the snow lasts,' the Miller used to say to his wife, 'for when people are in trouble they should be left alone, and not be bothered by visitors. That at least is my idea about friendship, and I am sure I am right. So I shall wait till the spring comes, and then I shall pay him a visit, and he will be able to give me a large basket of primroses and that will make him so happy.'

The Miller is wealthier than Hans not only materially but also in wisdom. He has such strong ideas about what a good friendship should look like and makes sure that Hans lives up to them. Even if this results in Hans giving and giving to the point of death, while the Miller benefits without losing anything at all, the Miller will still be able to pat himself on the back for being a steadfast, devoted friend.

The story features older Russian immigrants living in Los Angeles. The main character, Ivan Denisovich, was forced into a gulag earlier in his life (the character is an allusion to One Day in the Life of Ivan Denisovich by Aleksandr Solzhenitsyn). These days, Ivan lives comfortably, though he isn't entirely satisfied with his life and feels out of place in California. In the course of the story, he heads out on a fishing trip with a much more easygoing friend; their lifelong friendship, which has spanned continents, has given Ivan's life a greater sense of stability and continuity. But by the end of the story, he learns some things about his friend. Should he react in anger? Because what would anger change, anyway, late in life.

Title: A Friend in the Trade
Author: William Trevor
Where I Read It: The Hill Bachelors

This is a surprisingly moving story about a married couple (Clione and James) who part ways from an odd, often self-absorbed friend (named Michingthorpe). They're about to move out into the country, and because Michingthorpe doesn't have a car, he likely won't come by anymore.

Their friendship has a professional basis, as they're all working in the book trade, but Michnigthorpe has become more than a professional connection. He's a part of their life in a way that feels more personal. He's probably in love with Clione, even if he doesn't (or can't) show it in a conventional way. Also, he appears to need the couple more than they need him. Few other people – maybe no one else – would spend time with him as they do.

Whatever the true nature of Michingthorpe's attachment, Clione doesn't want to write him off as just some oddball with poor social skills.