disconnecting
I see people tuning out of politics because of the craziness overload. The feeling of disconnect is understandable. But with greater disengagement, particularly from people who are more sensible and moderate, there will also be greater extremism and corruption.

fractions
He understands pieces of the math – a rule about square roots, another about order of operations – but how to bring it all together? That's the really tough part. The word problems are especially confusing.

gusting
Along the water, the wind almost carries people away like bits of fluff.

mob
The gleeful malice of people who know they have the mob on their side. For the time being they can avoid accountability and critical self-reflection. They're all pumped up and ready to tear other people apart, the easier the target the better. None of this is about courage.

strain
Signs of his nervousness: showing up late and taking frequent bathroom breaks.

temperate
An hour of mild conversation at a cafe, like a soak in tepid water.

clop
I don't understand the appeal of a carriage ride in the park. The horses look depressed. The ride won't even show you the best sights.

decades
They've been married for 30 years, and there's a 20-year age gap between them. Their wedding took place when he was in his 20s, and she was in her 40s.

habits
One of the main points of agreement among the dozen or so people around the table is how difficult it is to change a habit. It's great to hear about the different approaches people take to uproot an entrenched pattern of behavior or thought. The strategies include introducing a new habit to supplant the old one, speaking out loud to yourself, and keeping track of progress in a journal. Outcomes vary, with reports of progress, backsliding, futility, triumph, vigilance.

materials
Where to even start with this essay. He's gasped out a couple of sentences. Copy and pasted a bunch of links into the file but hasn't read them yet. Come to think of it, that's a start of sorts. We can work with what's there.

mysterious
We cut through the park about an hour after sunset. I like how alien it feels. The rock formations look like gigantic creatures curled up in sleep. The skyline glitters like a computing device. People emerge into lamplight and lose themselves in shadow soon after.

plans
He shows me the blueprints, the promise of a home remade. He tries not to think too much about the bureaucratic red tape and the noise and messiness of construction.

tracking
At night, we walk past the large, arched window of a museum. A marble statue, turned mostly away from us, still seems to peer at us from the corner of its eye.
Posted by HKatz at 10:53 PM

alike
Teens form clots on the train's platform, their eyes on their phones, mouths pressed to sugary drinks.

appreciate
The structure, repetition, and sheer colorfulness of a picture book. Some wit in this one too. Since I'll probably be reading it more than once, it's best to find qualities to appreciate.

drummed
It's a crisp, sunny day, but in the middle of our walk a mild hail falls, only a passing shower, pelting us lightly.

exerting
She looks tired – coffee firmly attached to her hand, bags under her eyes, a weak grin of determination.

mustachioed
He's become obsessed with wrestling, namely WWE wrestlers. Using cardboard from discarded boxes, he's cut out and colored in a slew of wrestlers. I identify Hulk Hogan from the yellow blobs of hair on the face.

softly
We're huddled together by the water. The sky is creamy and tinged with pink and purple. The buildings are silvery.

streak
At lunch, they play a Trivial Pursuit type of game on their phone, the screen getting smeared with barbecue sauce as they stab at the answers (which are mostly correct, except for pretty much anything in the sports category).
Posted by HKatz at 11:16 PM

Who's the Butler in The Remains of the Day?

Years ago, I watched The Remains of the Day, and just recently I read the novel, which was written by Kazuo Ishiguro.

The narrator, Mr. Stevens, is an aging butler who has been working at the same grand home for decades. In the 1950s, that grand home is owned by an American, a kindly man who encourages Mr. Stevens to take some time off. Mr. Stevens embarks on a weeklong road trip to visit a woman he still thinks of as Miss Kenton, though she has been married for years now. She was once a housekeeper working alongside him during the 1920s and 1930s, the pinnacle of his butlerhood, when the house belonged to Lord Darlington. 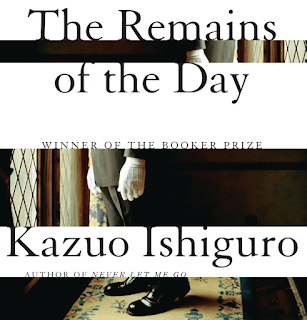 The novel alternates between Mr. Stevens' observations about his road trip and his reminiscences about his years under Lord Darlington. What I enjoyed most about this book is that it's difficult to pin the narrator down - who is he, really?

He says that being a butler is much more than wearing a costume of professionalism that one easily discards. A butler must be, at almost all times, in complete mastery of emotions, impeccable at service, ever correct in conduct, and placing the needs of his employer first. Only when a butler is completely alone, says Mr. Stevens, can he shed his professional demeanor.

The thing is, Mr. Stevens never seems to set aside his professional demeanor. Even in moments in the book when he's on his own, his mind is focused on professional matters. When it's revealed at one point that he sometimes reads sentimental love stories, he claims it's primarily to improve the way he speaks on the job. Though he unbends enough to admit to sometimes enjoying the content of the stories, this enjoyment is secondary to professional improvement.

He can't even talk about personal matters without first making them professional. His wish to visit Miss Kenton after all these years holds personal interest to him, but he ultimately justifies his trip by saying that he wants to talk to her about her potential return into service as a housekeeper, so that she can help him with a current staffing shortage. When he talks about his father, who was also a butler, he focuses not on their father-son relationship but on his father as a professional servant. (Mr. Stevens Sr., on his death bed, expresses the doubt that he's been a good father to his son, but Mr. Stevens Jr. dashes away to fulfill some duties rather than speak of this matter to his father.)

It's clear that Mr. Stevens is disconnected from himself emotionally, but is the disconnect really so powerful that he can barely understand himself? Or is he still deliberately acting the part of butler to his current audience, the reader? Because if he's addressing the reader, he isn't entirely alone, and he can't quite shed his butler persona and talk about certain personal issues more directly. Then again, the butler persona seems to be much more than a persona to Mr. Stevens. It's not acting - it's something that he's integrated into himself so deeply, and he probably wouldn't know how to behave without it.

Towards the end of the book, he speaks most openly about his profound regrets, but interestingly, he doesn't address this revelatory speech to the reader, but to a stranger who happens to be sitting next to him at a pier. The reader finds out by listening in, as it were.

Maybe confronting his regrets too directly, as an explicit part of his narrative to the reader, would lead to utter mental collapse. He needs his butler duties to prop him up. His commitment to duty has sheltered him all these years from overly close contact with other people, though of course they've left him with regrets. One regret is missing the opportunity to marry Miss Kenton. Another is that his former employer, Lord Darlington, who received Mr. Stevens' unquestioning loyalty and self-sacrifice, was a Nazi appeaser – maybe not so much because he subscribed to Nazi ideology but because he was a dupe who helped the Nazis influence other well-connected, powerful Brits to take a similar stance on appeasement.

So what's left for Mr. Stevens at the end? He mentions that he needs to learn how to banter, as bantering seems to be a way to connect with people. However, his main reason for learning banter is to better please his new American employer. He's a butler, through and through, to the end. It could be that's the impression he wants to leave to the reader, but it's also probably the only solid reality he can hang onto in his life, the only way he knows how to keep living.
Posted by HKatz at 11:52 AM

affection
Squeezed into a seat on the subway, a young girl hugs her younger brother on her lap and kisses him repeatedly on the back of the head.

coloring
She soaks her feet in a foot bath with a bath bomb that dyes her legs faintly blue.

idly
The boats on the pier are massive and idle. A gangplank has extended from one of them but no one walks on it. It's a drowsy day.

massively
The massive clouds make the buildings by the harbor look small and brittle.

posture
Asleep in his seat, he has bent forward so much, his face is parallel to the floor.

security
Gates and guards and more gates around an ominous complex that makes us nervous just going near it, as if there's an unseen line we can't cross unless we want to fall under suspicion.

contending
She's giving an outdoor talk, and her voice strives to rise above the wind.

context
I bump into someone I know quite well in a location where I don't expect to see him. For a couple of seconds I don't recognize who he is, because his face is usually framed by other surroundings – not a street with a church on one side and glossy, sparkling storefronts on the other.

interval
Late at night, the subway platform fills with people waiting for an infrequent train. They look up from their phones, crane forward to peer into the tunnel, sigh, look back at their phones.

melted
The Camperdown elm looks like it has melted. Its branches are rivulets of brown wax.

parting
We murmur how we'll see each other soon, but we probably won't. Our friendship has weakened in the last year or two, not for any one reason, or really any obvious reason.

rose-tinted
Someone plays "La Vie en Rose" on a saxophone under an archway. They're striving to create a certain atmosphere – romantic, nostalgic, Parisian – on a muddy day.

soothingly
Ginger and carrot soup to soothe what might be the beginnings of a cold.
Posted by HKatz at 12:35 AM

There's a beautiful set of gardens in the Riverdale neighborhood of the Bronx overlooking the Hudson River: Wave Hill. I was there once, several years ago, in January, and twice just this past month.

I'm going to share some photos of what it looks like in winter vs. late spring/early summer. 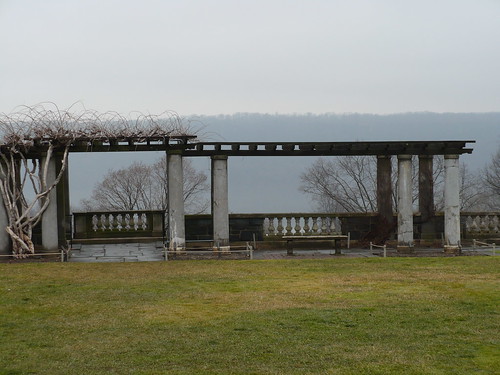 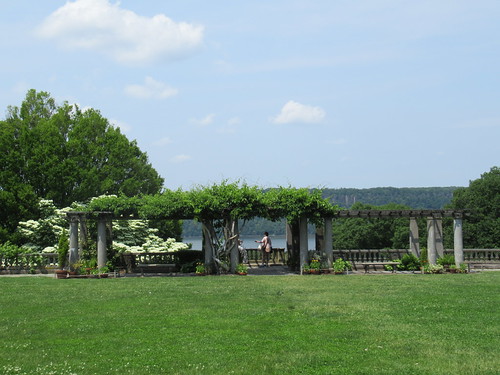 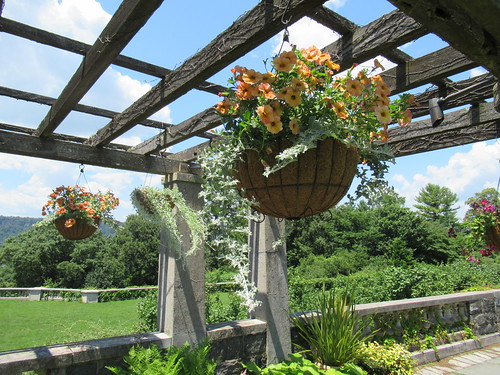