advice
"Just try to be a good person," he says to the group. "Don't compare yourself to others."

background
As we watch a movie that's hollow and pointless, the night hums around us.

popcorn
We share a bag of popcorn in a courtyard enclosed by bricks.

relaxing
The trees part, and I find a bench streaked with sunlight.

unexpectedly
A delightful surprise left in my bag: a bar of 88 percent dark chocolate.

displayed
It's a bright, vivid street, even at dusk. The windows glow with everything I won't or can't buy.

ethical
She's trying to do something ethical with her data science work, conscious as she is of how data can be used to manipulate people, deprive them of privacy, or deny them favorable decisions in unfair ways that are difficult or even impossible to appeal.

gnawed
The fog has feasted on the skyscraper, eating away the steel.

jet lag
Night after night, waking up in the middle of the night, to the flat, dark hours.

outdated
He tries to hook up old speakers to an old computer. "Houston, we have a problem," I say, and we make crackling static noises and laugh.

pinning
She makes claims that force you into a defensive mode. For example, her questions already contain what she considers the true answer. She doesn't ask to genuinely inquire.

rubble
I think of what needs to be rebuilt, and I shiver at what it will take.
Posted by HKatz at 3:11 PM

To be clear, neither of these movies is science fiction. But in both of them, a sci-fi script plays an important role. 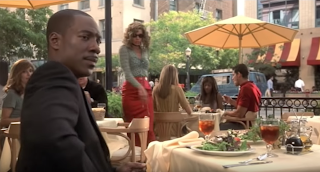 Bobby Bowfinger (Steve Martin) is a middle-aged, low-budget Hollywood filmmaker down to the last of his money. His ambition is grand, but his prospects are depressing. He has a stellar script – "Chubby Rain," which is about aliens that arrive on Earth in rain drops and take control of people's minds – but to finally enjoy his big break, he needs a celebrity for his film. Kit Ramsey (Eddie Murphy), an action movie star, fits the bill. Kit, of course, won't give the time of day to someone like Bobby Bowfinger, so Bowfinger takes the unconventional approach of filming the movie with Kit, without Kit knowing he's in it.

It helps that Kit is secretly delusional and paranoid (about aliens, among other things). What also helps is Bowfinger's faithful cast and crew, and the fact that they find Jiff (also played by Eddie Murphy), a dorky pushover who looks remarkably like Kit and could help with closeups. (One funny moment in the movie is when Jiff casually mentions his connection to Kit, and you see everyone's reaction.)

Bowfinger is funny and ridiculous. It's also a biting commentary on some aspects of Hollywood culture. There are no romantic relationships, only the opportunistic seductions enacted by Daisy (Heather Graham), and the driving action involves multiple major deceptions.

That said, the film can still be oddly touching. Bowfinger's cast and crew include Carol (Christine Baranski), who commits to her role as if Chubby Rain is high art, Afrim (Adam Alexi-Malle), the screenwriter who hopes to quit his accounting job, Slater (Kohl Sudduth), a young and not especially bright young actor who just wants to see himself on-screen, and Dave (Jamie Kennedy), Bowfinger's loyal camera operator. Plus the illegal immigrants Bowfinger rounds up from the border who get a crash course in movies and wind up doing quite well for themselves.

So even though it pokes fun at Hollywood and big celebrities, Bowfinger doesn't really get dark. It doesn't delve too deeply into all the dysfunctions of celebrity culture and the powerful, unscrupulous people who operate in it. It's about second chances and happy endings, at least happy from the perspective of the characters, who stay afloat and get to make another film. (The title of that masterpiece is "Fake Purse Ninjas".)

The best thing about this movie is how it conveys someone's passion for telling a story, and the genuine love, hard work, and commitment that go into writing. The main character, Wendy Welcott (Dakota Fanning), is a young woman with autism who is a devoted fan of Star Trek. She prepares a submission for a Star Trek script competition, and when it seems like she won't be able to mail it in on time, she decides to travel to the movie studio and deliver it in person.

Were various plot points a bit of a stretch? Sure. In some ways Please Stand By is also a light movie. Although things don't go smoothly for Wendy, the movie keeps an underlying positive tone. She encounters some people who are criminal, obnoxious, or indifferent, but she's also able to depend on the kindness of strangers and the dedication of her caretaker, Scottie (Toni Collette). Even her sister, Audrey (Alice Eve), who has been keeping a distance from Wendy pulls through for her.

The parallels between Star Trek and Wendy's real-life adventures are present but not overdone. The universe of Star Trek, and some of its relationships, make sense to Wendy, particularly when it comes to the hero of her script, Spock. (Full disclosure: I haven't watched the original series with Spock, but I have watched large chunks of The Next Generation, Deep Space Nine, and Voyager, where characters like Data, Odo, and Seven of Nine are outsiders who wrangle with the difficulties of human interactions and emotions.)

Wendy's script writing turns into a way for her to connect more with others. In all, this is a movie with good acting, some genuinely moving scenes, and a memorable depiction of how intense writing can be and how worthwhile it is to write.
Posted by HKatz at 5:31 PM

departure
I hurry back to give her a second kiss.

depression
One statue with a ripped out torso embodies depression. Mind and body laid to waste.

feasting
At an Uzbek restaurant: salads in small, shallow dishes and a delicious stew that settles comfortably in my stomach for what seems like days.

mealtimes
A rich salmon salad in the morning. Pecan cookies in the afternoon. Some yogurt for dinner.

sculptures
On one outdoor terrace, a sculpted horse considers the ocean and the narrow streets of an old neighborhood. On the rooftop, a real bird with black and white feathers perches on a steampunk-like contraption. Nearby, a statue skulks, its face lost in the shadows of a hood.

staked
The cat peers out from among broad, dusty leaves.

waterfront
By the ocean: scooters, bikes, paper boats strung up in the air, a rippling flag on a rock among the waves.
Posted by HKatz at 4:56 PM