found
Sometimes I'll walk somewhere without any particular purpose, and I'll find something I didn't know I needed. In this case, it's a book, and its contents are so relevant to me I spend most of the day carrying it around and peeking into it when I get the chance.

lashed
In a moment of childish temper, a middle-aged woman strikes another older woman on the back. People gasp. She pretends not to notice their dismay, but hurries out soon after, her face tight with the knowledge that no one will ever see her the same way again.

leaping
Light-headed elation as sunset draws the day down.

muffle
Bundled up on the sofa while the clock ticks and traffic murmurs.

patchouli
They're back - the spindly, perfumed twins who dress like they've stepped out of a steampunk novel. The backs of their hands betray their age, but in other ways they're young; they share a seat and adjust each other's hair.

pervade
Feet clad in cold damp tights. A chill seeps through the door.

trickle
Cold rain snaking into the sleeves of my poncho.

Title: How to Talk to Girls at Parties
Author: Neil Gaiman
Where I Read It: Fragile Things
This reads as a twist on the tired idea that men and women are from different planets. Two teenaged boys, one of them shy and the other one more confident, wind up at a party where the girls are literally aliens - intergalactic travelers, countless galaxies in their eyes. One girl is a living poem containing the essence of a people whose planet died. Intimacy can be terrifying, what with the universe we each have in our heads.

Title: Legal Aid
Author: Frank O'Connor
Where I Read It: Legal Fictions
In Ireland, two young people fool around, the girl gets pregnant, the boy is weak-willed, the boy's father objects strenuously to the idea of marriage, and finally it's up to the girl's lawyer to try and resolve the situation out of court where it's made its way in a paternity suit. The story is full of sly humor and spot-on observations about social pressures and people's petty foolishness. It also compares people's messy actions and motives to the tidy narratives they try to spin in court - where they become 2D figures (paragons or fiends) in a staged drama that has little to do with justice. One lawyer has to choose either to destroy his target in court the way he's been paid to do or to recognize her humanity and the all around fragility and shabbiness of the situation.

Title: Liars in Love
Author: Richard Yates
Where I Read It: The Granta Book of the American Short Story
Love in this story is a temporary word, used when convenient to express a short-lived need. Play-acting at love is a way to fight off loneliness. The main character is on a scholarship in England and on his own for a while. He acts like someone else and steps into a life that isn't his. It's an intense but hollow fiction. And if he can express love as a lie so neatly during this brief, unusual interlude, what does it say about his feelings the rest of the time when he's back in his "real life?" Throughout the story, there's the sense of people engaging in the mechanics of a relationship (sex, cohabitation, meeting the partner's family), but without real intimacy. They clutch at each other for a while and remain lonely.

Title: The Littoral Zone
Author: Andrea Barrett
Where I Read It: American Short Stories Since 1945
Two scientists studying marine life have an affair. Both are married. When they're apart from their families, their relationship makes sense to them, and they think it's worth the betrayals and upheaval. But what will they discover about themselves, years later? What made sense at one point in their lives might no longer apply, and what they live on now are stories they tell to try to justify and redeem what they've lost.

In oceanography, the term 'littoral zone' refers to the part of the ocean nearest the shore (it also sounds erogenous). It's an unsteady place, subject to currents, winds, the tide, the shape of the shoreline and other sources of influence. Creatures that thought they'd learned to thrive there might find themselves gasping on dry land or thrashing around in unexpected turbulence. To keep living, they need to adapt, even if circumstances are now less favorable than they were before. To survive, they can't turn on each other. The stories they tell regulate the tension in their relationship and preserve a certain environment that allows them to both keep breathing.
Posted by HKatz at 6:01 PM

arresting
There are some sounds to which I fall silent and still.

present
The key is to appear clearly to yourself and think, "Here I am. Here's what I'm doing." And not have to shy away from either.

pretense
He makes the "both sides are wrong" copout. Yes, both sides have flaws - but for one side, it's a few typos, while for the other side it's the equivalent of ungrammatical chicken scratch handed in on toilet paper.

ribs
I'm imprisoned in the stories I tell about myself.

soggy
Rain puddling under a bench where we sit and share a bag of peanut butter cups.

soreness
Damp and tired, feet chafed, after a long walk in the park with inappropriate footwear.

version
Change the narratives then. Cobble together some new ones. Find out who you are after years of not listening, of treating yourself as second-rate.
Posted by HKatz at 3:22 PM

Why my digital avatar is a tree 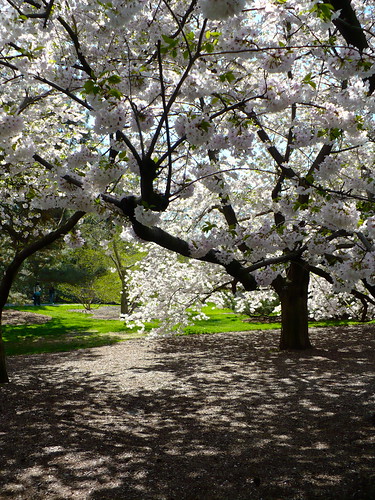 Trees might not appear to move or change much, but they're teeming with life, inside and out, and changing all the time. Sometimes in obvious ways, other times in secret - the roots spreading underground, the life circulating under the stiff bark.

The roots can penetrate deeper and travel wider than expected, picking their way through soil and rocks, away from the light.

At the same time they spread towards the light.

They are steady and can possess great resilience. They might take on surprising forms, and reveal their beauty and usefulness in unexpected ways.

They are always dancing. 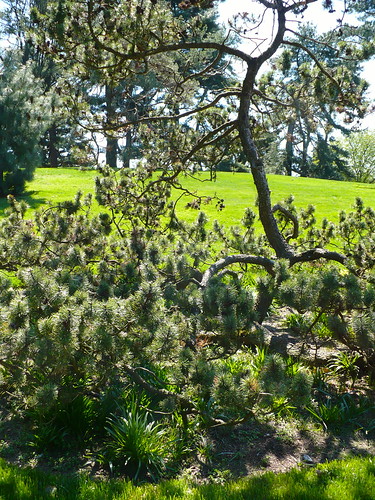 Why did I post this today? It's Tu B'Shevat, the New Year for trees in Judaism.
Posted by HKatz at 4:16 PM

Email ThisBlogThis!Share to TwitterShare to FacebookShare to Pinterest
Labels: Judaism, photography, photos (mine), self, trees

collected
I love her look - black jeans, black blouse and vest, a fedora on springy curls of hair. An attitude of cool self-possession.

enticingly
A bright warren of books and tables for two.

seitan
Sometimes it's meat-like and meat-flavored. Other times it's like a rubber ball sliced up and well-seasoned.

spongy
What's left of the plant is brown, sponge-like matter crumbling on a sunny window.

streamers
The paintbrush releases ribbons of color into the water.

trending
She has the look of someone who works in a social media company. Sleek and tan, her nimble fingers dancing across a tablet. Like a creature sprung fully grown from an iPhone.

viscid
Green pulpy whirly gunk in a blender.
Posted by HKatz at 11:39 PM