cancellations
In one day, most of my calendar evaporates. One cancellation after another. Businesses close. Classes are cut short.
elsewhere
I ask her why she's looking through Zillow. "Escapism," she says.
reportedly
Mixed messages from politicians, pundits, health experts. I wonder if I'm underestimating the seriousness of this virus. Or maybe it hasn't fully sunk in that we're in deeply unusual circumstances and nobody knows how any of this will turn out.
restlessly
Distracted during synagogue services, my eyes and mind roaming the room.
speculations
We're in a building that tomorrow we won't be able to enter. We talk about the virus and how people think it spreads. We have little idea of what we're talking about. Sharing things we've heard on the news produces a mixed effect: heightened anxiety combined with the relief of unburdening some of our anxieties.
stockpile
The supermarket is clotted with thick lines. People are stocking up.
strangeness
By this point, I'm used to working from home. But it's not the same now. There's an intensified uncertainty and a constriction. The city where I live has become much less familiar.
Posted by HKatz at 9:14 PM

coughing
I'm starting to look at snifflers and coughers suspiciously. Like the young guy sitting at the other end of the room who keeps coughing wretchedly into his hand. To the person he's sharing a table with, he says he's fine. But he does admit later on, with a sigh, that he's tired.
dated
We use the Internet Archive's Wayback Machine to look at Apple's website from the 1990s. It had a blocky table-based layout. It looked so amazingly clunky and amateurish (by today's standards).
horror
The students say they don't want to learn more about the Holocaust, because it's too horrible. At least they see the horror in what happened.
overlooked
"Does he ignore me because I'm not as smart as my brother? Is that why he barely talks to me?"
reminder
The dog flops onto my lap, face-up, to remind me that she hasn't gotten tired of belly rubs yet.
unpleasant
I cringe at the dynamics in that home, the disrespect that flows casually to the mom, the vulgar comments about women and girls.
viral
Two things people are talking about all the time: the virus and the presidential election. The presidential election and the virus.
Posted by HKatz at 11:06 PM

convincingly
He's convinced that he's a loser, and he speaks to himself the way he wouldn't speak to anyone else. After years of such self-talk, the words are almost comforting. They've become something like a reliable truth, even though they aren't true.
dragged
She doesn't want to finish her homework, so she stretches out each question with pretend thinking, bathroom breaks, trips to refill her cup with water, and off-topic questions.
drones
A row of old computers chuntering on through the same tasks, year after year, under different masters wielding different tools.
floaty
Her skirt floats around her as she dances, as if it's a flowing extension of her energy and grace.
gobbled
Mounds of laundry fed into the maw of a washing machine.
pent-up
Her dragon sculpture looks as if it will come alive at any moment, whipping its tail around and stretching its jaws open to unleash fire.
slogging
I force myself to finish something I'd rather not be doing and that I wish I wasn't doing alone.
Posted by HKatz at 1:55 PM

admirable
She's productive, patient, organized, and kindly, intelligent without being arrogant, a good teacher overall.
assenting
They keep cutting into each other's speech, and their voices are getting louder, so it seems at first like they're working themselves into a fight. But they're in agreement. They're vigorously, almost rabidly, agreeing with each other about a set of political beliefs. Around them, the other coffee shop customers keep their eyes fixed on phones and laptops.
burrowing
In a neighborhood that's otherwise cold and dingy, the library is a warm nook.
ciao
We part ways sweetly on a dark street.
conversing
We curl up side by side for a long conversation.
lackluster
A cheesy cartoon, crude jokes, and stilted conversation.
quarrel
Sobs, slammed doors, the seeming hopelessness of a fight with a good friend. Chances are that half an hour from now, they'll be on speaking terms again.
Posted by HKatz at 7:51 PM

fever
His face is beaded with sweat. On his nightstand, a thermos is perched on a short stack of books, and beside it a bottle of over-the-counter fever reducer.
frigidly
Our fingers are numb and chilly from handling wet bags of celery in a stiff wind.
gritting
Wounded, she staggers back to her feet, her jaw set.
outlet
Their backyard is a narrow rectangle, just big enough for the kids to take their noise outside for a while.
pausing
Some of my most peaceful moments that day are on an elevated subway platform, waiting for the train. It's a lull in my schedule. The day is cold, but the sun is steady, and I can stamp some warmth into my feet.
retrieved
A bit of biology knowledge – on meiosis – floats up to consciousness at a critical moment. Sometimes you don't know when you'll need to know something.
scavenging
The leftover fruit, soft with rot, is tempting. They shuffle closer to snatch up the firmer specimens, while ignoring every barked order to leave.
Posted by HKatz at 8:10 PM

cheerful
A girl riding on her dad's shoulders raises her pink mittens to a drizzly sky.
crunchy
The sunlight crackles on salt-encrusted streets.
eructation
The gutters are belching litter into a foul-smelling wind.
inert
She has no illusions about what she'll learn. She has little hope that she'll do better. The next few hours are just a way to pass the time.
limitations
They fall back on what sound like programmed responses. A "hm" in response to an observation. A tiny set of one-word answers to any questions you may have. Chunks of your own speech echoed at you. Their eyes drift to a wall, a window, and rest expressionlessly.
touches
She thinks of how to make every corner of her home more lovely. The flowers I come across while climbing the stairs make me smile.
withdraws
"I don't belong in school," she says. But where does she belong? She doesn't know. Maybe there's a quiet room somewhere with a door that locks, a pair of ear buds, and a phone.
Posted by HKatz at 11:41 AM

COVIDiary: Masked and On Foot

One thing I've been doing during the pandemic is walking for miles. Here are some of the highlights:

The 42nd Street branch of the New York Public Library 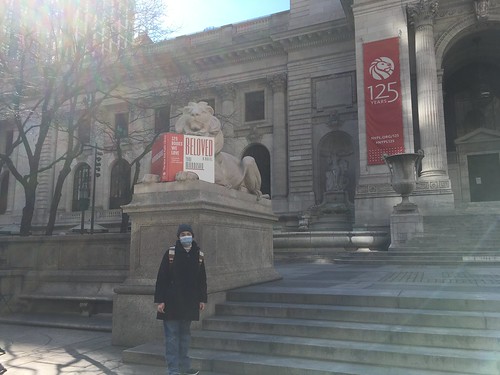 A small park near the American Museum of Natural History 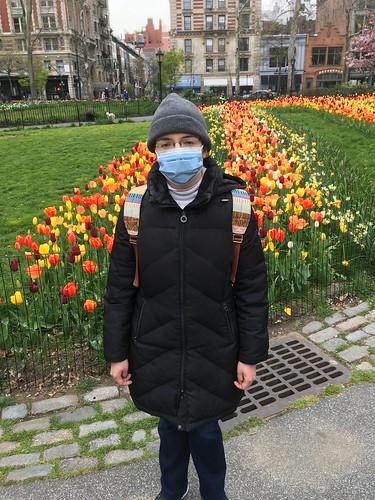