That is what nature does: it draws the fern's grace from the putrefaction of the forest floor…

The Periodic Table, which I read for the Classics Club Challenge, is author Primo Levi's autobiography told in a series of elements (and translated into English by Raymond Rosenthal). Levi worked as an industrial chemist and survived a year in Auschwitz after being captured while fighting in the Italian resistance against the Nazis. Each chapter in his book centers on a different element and how it ties into some facet of his life.

I loved this unique, poetic approach to the elements. What an element symbolizes or what its association is with his life might be subtle. But it's the organizing principle of his life's narrative (at least the one he shares here) - sometimes because a memorable episode of his life involved the use of a given element, other times because someone or something reminded him of it and its properties.


… one must distrust the almost-the-same (sodium is almost the same as potassium, but with sodium nothing would have happened), the practically identical, the approximate, the or-even, all surrogates, and all patchwork. The differences can be small, but they can lead to radically different consequences…


But it isn't as if he spends the entirety of the text talking in chemistry-related terms. There's poetry too, and an exploration of philosophy and emotions. As when he's captured as a partisan.


During those days, when I was waiting courageously enough for death, I harbored a piercing desire for everything, for all imaginable human experiences, and a I cursed my previous life, which it seemed to me I had profited from little or badly, and I felt time running through my fingers, escaping from my body minute by minute, like a hemorrhage that can no longer be stanched.


Or when he falls in love.


In a few hours we knew that we belonged to each other, not for one meeting but for life, as in fact has been the case. In a few hours I felt reborn and replete with new powers, washed clean and cured of a long sickness, finally ready to enter life with joy and vigor…


And the poetry and chemistry freely mix too, as during his stint at a mine analyzing the soil for the presence of certain elements, he compares the elusive nickel to a sprite darting out of reach "with long perked ears, always ready to flee from the blows of the investigating pickax, levying you with nothing to show for it."

The use of the elements lends a certain weight and permanence to his life's story; he's tying himself to the stuff of the Earth. At the same time, his forays into chemistry often mirror the messiness and transitory qualities of his life; it's not all about simple, tidy formulae, though it feels like a triumph when a formula turns out as expected. Throughout the book he unearths episodes of his life and examines them. What holds them together? He constructs a loose narrative framework of chemistry and poetry. And somehow his life's story can hang together on that. (Which raises other questions about what constitutes a narrative, and how does one find meaning in life? He found an approach unique to his own life.)

A sunset over the Hudson 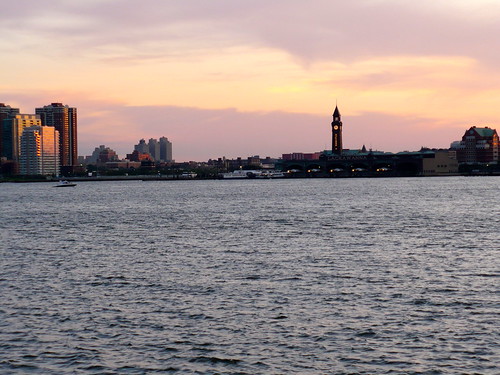 A walk through University Heights in the Bronx 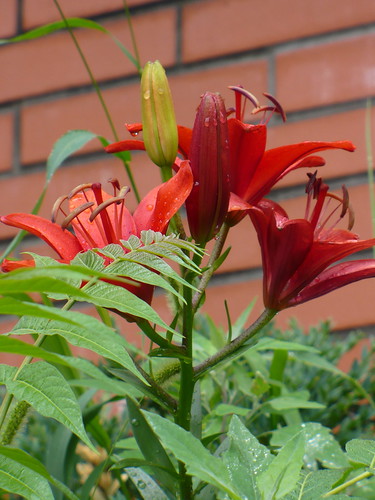 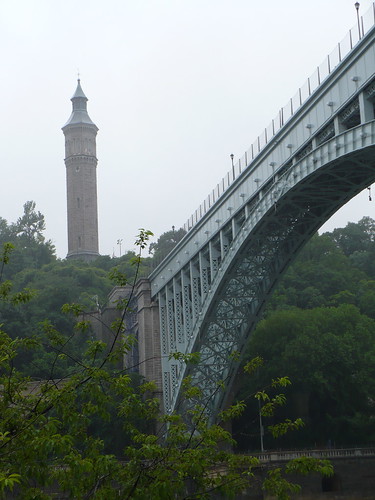 A hike through Van Cortlandt Park in the Bronx 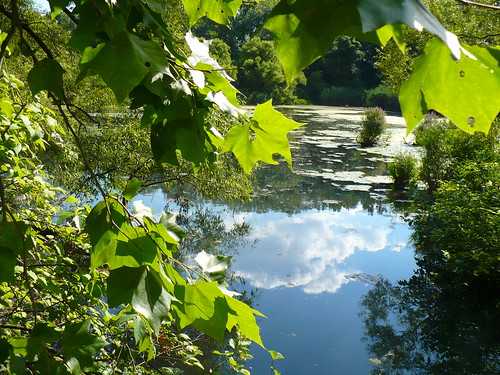 A stroll through Fort Tryon Park in Northern Manhattan 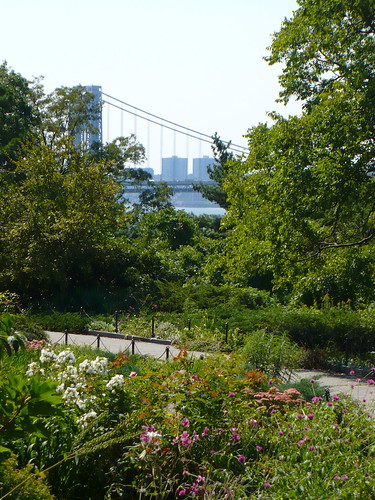 with a stop at the Cloisters 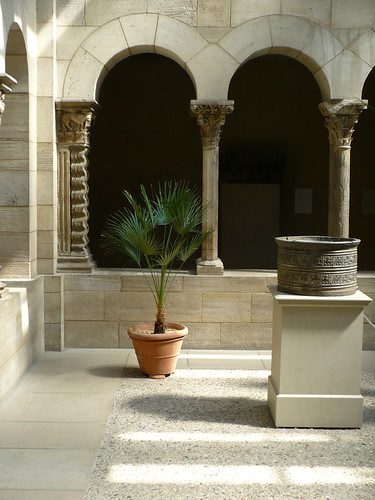 Sunshine by the East River at Carl Schurz Park 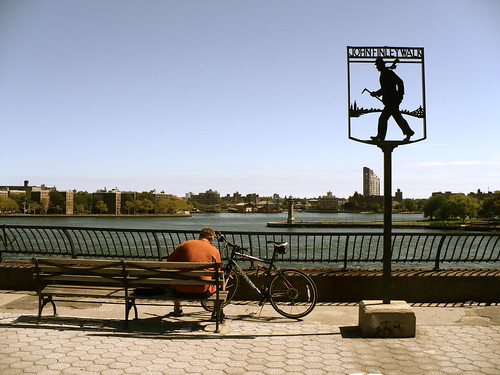 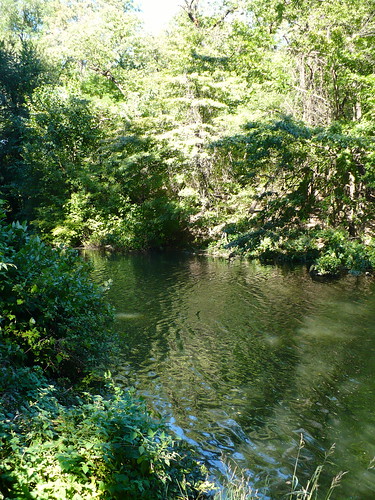 bedazzle
The sun's out, and the sand looks like snow, white and glittering.

commitment
She gives me her trust like she would her child. I cradle it with awkward care, feeling its quiet hammering pulse and knowing I must never lose hold of it.

deceptive
On the playground, she encounters children who lie charmingly and convincingly, who are friendly one day and insulting the next. She doesn't know what to make of them; they confuse her. Beyond what they do, it's the why - the why is at the heart of the bewildered hurt.

greased
Sleek men attend to their ale and steak.

raring
The dog, at the end of her leash, recognizes my scent, whines, leaps and strains to get close, to be petted and present her belly for a rub.

sundering
Between me and him - a window pane, the twisted branches of a tree.

wrestlers
In their academic gowns, they circle the stage and size each other up, as if their battle of wits will be a physical brawl.
Posted by HKatz at 11:43 PM

Title: After Rosa Parks
Author: Janet Desaulniers
Where I Read It: Breaking Into Print
Since her divorce, Ellie has become more cautious about making mistakes. Throughout the story, there's the feel of her treading carefully around places where land mines are buried (but can her anxiousness and caution help her sidestep them?). Her young son, Cody, has just started school and tries avoiding it, with its strange rules and people; he gets sent home ill. Her brother, Frank, a veteran who has traveled aimlessly, has come to stay with her; perhaps he'll be a father figure to her son.

There's little sense of permanence or promise in this story. Frank could disappear at any time. Cody perhaps intuits that school is the start of an initiation into a life full of small aggressions and other senseless acts that chip away at you, making you a small burrowing creature who can only face the scary world with your nose to the ground and your eyes downcast. To what extent does laying low and doing what you're supposed to do help you live?

Title: The Composition
Author: Antonio Skármeta
Translators: Donald L. Schmidt and Federico Cordovez
Where I Read It: A Walk in My World
Pedro, a soccer-obsessed boy growing up in Pinochet's Chile, is vaguely aware that his parents are anti-fascist, but when he asks what an anti-fascist is, his mom tells him he's just a child, and children aren't anti-anything.


"Children are simply children. Children your age have to go to school, study a lot, play hard, and be kind to their parents."

His life is a fairly happy child's life, except for jolting events, like when his friend Daniel's father gets taken away by the police. Then one day at school, he can't avoid politics any more. An army officer shows up and tells the kids to write an entry for an essay contest. He asks them to describe exactly what their parents do and talk about in the evenings. Will Pedro mention that his parents secretly listen to the radio? Will he write about their conversations? Continuing to be an innocent child will require some political savvy.

backgrounded
On stage, there's a doctor, silent for the most part, who hangs in the background of every scene reminding people of impending death. For the actor who plays him, it must be a fun if not challenging role - he gets to look grave and silent while listening to grand music, night after night.

fibrous
Mango in ropy slices on a blue china plate.

gutless
What he tells her is a cop-out. "Heaven will reward you," he says. It's a consolation that's easy for him to offer, as he gently insists - at no cost to himself - that she give up what's important to her in this life.

inching
They're all careful in the dim, carpeted room. Their shoes are off. They speak quietly, even about things that devastate them. On a table to the side, there's seltzer and cookies.

operatic
She sings her way to an early death.

rejection
When she hugs him, he keeps his arms by his sides and turns his face away.

threadbare
She takes the view that people are motivated either by fear or by love in anything they do. Love and fear are battling all the time in her, and she's exhausted with both.

The Sheer Prettiness of Provincetown

I recently visited Boston for a few days and made a day trip to Provincetown with a ferry (the Boston Harbor Cruises one). I'd never been to Provincetown (or any other part of Cape Cod), and it was a treat. Even the parts of town that were most blatantly a tourist trap were still lovely.

I stuck to Commercial Street, first walking all the way west to where it begins near the spot where the Pilgrims first landed in the 1600s (it wasn't at Plymouth, but Provincetown - they moved on to Plymouth a little later). At the spot historians determined is likely the one where they made their stop, there's a plaque and a small park (Pilgrims' First Landing Park). Off the park, a small beach and a jetty made of large rocks. 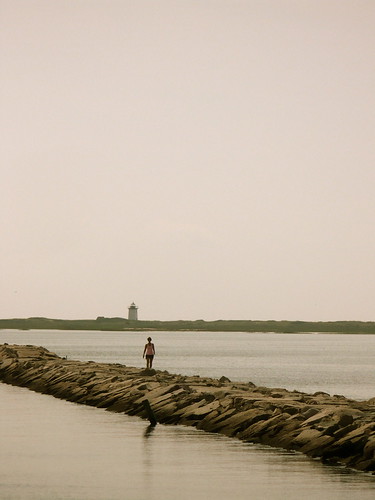 I walked out onto the jetty for a while. I loved listening to the water rushing under the rocks (where I also found some smashed shells, probably from sea gulls dropping them on the rocks to get at the meat inside). 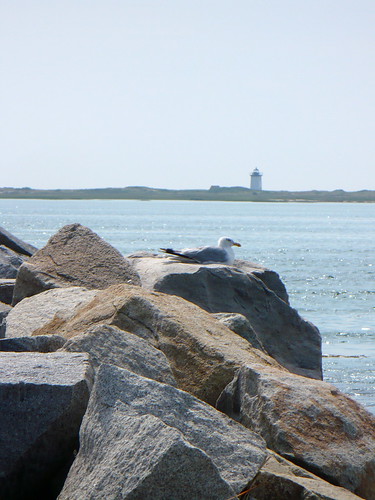 And I loved the smell of the salt marsh all around. 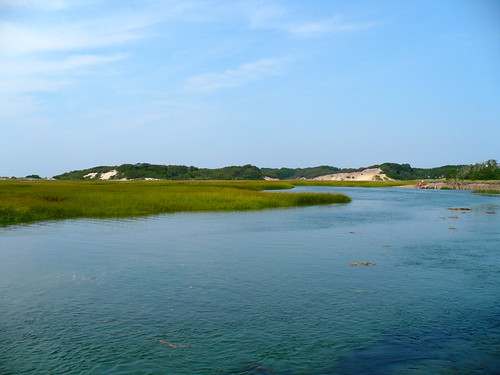 digested
He admits to getting most of his news from The Daily Show as a way to relieve anxiety about the awfulness of current events. When the news is delivered in humorous form, he's better able to accept it.

entrapped
In the subway station, a toddler is shrieking. She's stuck in one of the vertical turnstiles. The bars pin her into a small dark space. They shiver when she pushes against them, but they don't swing around to let her out.

hints
There are signs of life on the stairwell - cigarette butts, a candy wrapper, a bookmark with a black kitten.

lushly
A wine-colored taffeta gown swaying at the ankles.

productive
Anxiety often stifles creativity, but sometimes it's a source of new ideas - a solution I hadn't thought of before, a twist to a plot that hadn't occurred to me until the problem began to eat its way through my mind.

stormy
The eye of the media is on them, and with it comes the windy noise of commentary. It will pass soon.

swapped
Instead of trains, he pushes trucks onto the tracks; dump trucks linked to cement mixers that are hooked up to tractor-trailers.