Synopsis
Pierre Brochant (Thierry Lhermitte) participates in a weekly dinner where he and his friends bring along the biggest idiots they can find; they do this for amusement and as a competition to see who can invite the crowning idiot of the evening. On the fateful day in which the film is set, Pierre believes he's found a fine specimen of idiocy: François Pignon (Jacques Villeret), a tax-man from the Ministry who in his spare time builds models of architectural wonders out of matchsticks. Pierre, a wealthy publisher, injures his back during golf and is forced to miss out on that evening's 'idiot dinner', but he invites François to his apartment to get to know him better before the next get-together. Thinking that Pierre is interested in publishing a book about his matchstick models, François arrives eager to help him in any way, and so, in a single evening, Pierre's life cheerfully goes to pieces.

Characters
François Pignon is the most likeable character here, not only because he's honest and genuinely willing to help, but because the actor who plays him, Jacques Villeret, has the endearing eyes of a hush puppy and an adorably pudgy face. It's difficult to take your eyes off of Villeret, who gives a brilliant performance as a well-meaning guy who can't think quickly on his feet and keep track of multiple details, though he appreciates mischief and cleverness. I thought his matchstick models were pretty impressive, and François makes an excellent omelet too so he's not without his talents.

For most of the evening François tries to help Pierre track down and win back his wife, Christine (Alexandra Vandernoot), who said that she's leaving him; Pierre, hampered by his bad back, is often limited to looking on in awe and horror as François attempts to set things right. This is Pierre's comeuppance. In some ways you feel bad for him (to have so much go so wrong in so little amount of time) but he brought these disasters on himself through his dishonesty and arrogance. Thierry Lhermitte, in addition to having lovely blue eyes, is a fine actor, the straight man to Villeret's loveable buffoon, and watching them together is a treat.

Two more minor characters are also worth noting. Lucien Cheval (Daniel Prévost) is a zealous tax inspector and diehard soccer fan who gets sucked into, and contributes to, the unfolding miseries in Pierre's apartment. Juste LeBlanc (Francis Huster) is Pierre's estranged friend; François inadvertently reconciles them during the film, and so Juste is at hand for a part of the evening, though even together he and Pierre can't undo what François has wrought. Juste has an infectious wheezy laugh; the situation gets to be too funny for him to handle, and I understand completely - I can't remember the last time I was laughing so hard during a movie that I had to pause it several times.

Relationships
Pierre and François don't become best buddies or anything like that. The movie ends on just the right note.

Stand-out scenes
Any time François Pignon uses a telephone is funny, whether he dials the wrong number, forgets the primary purpose of the call, gets carried away with emotion, chats about irrelevant details, and even when he does finally get it right, screws things up immediately after.

The entire scene with the tax inspector is also brilliant, with different kinds of humor from verbal wit to sight gags, multiple revelations, some plot points memorably resolved and new ones introduced.

Further thoughts
I can't think of another movie where a character says, in all seriousness, "I'm in a bind; I don't have an idiot. I've looked all over... got one on hand?" Pierre is the one who says this; and he doesn't have to look far. Pretty much everyone is an idiot in one way or another.

Email ThisBlogThis!Share to TwitterShare to FacebookShare to Pinterest
Labels: laughter, movies, worth watching

exhaust
Each car streams the heat from its exhaust pipe across my shins.

frangible
Time crumbles away in sweat, sleeplessness, and apathy.

heatwave
The air presses down like an iron, smoothing my clothes flat onto my skin.

kinetic
She makes her day sound exciting, each detail a delight, and something new to learn at every ordinary place she visits.

leadlight
The leaves look like pieces of green stained glass. It's reassuring to see that even when the heat is brutal and they're scorched, they can still endure beautifully.

nitpicky
He argues into his cell phone, loudly and unselfconsciously, about the precise number of tissues he used the night before to blow his nose.

pillbug
There's a little cell inside me, accessed by a hatch, and sometimes I disappear into it, curling up like a pillbug.
Posted by HKatz at 11:43 PM

Growing in a mosaic garden 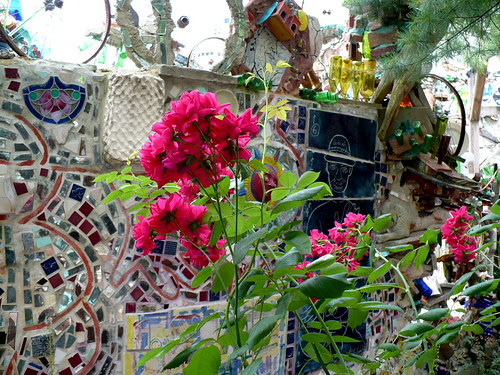 From Isaiah Zagar's Magic Gardens in Philadelphia.
Posted by HKatz at 1:57 PM

amphitheater
Watching The King's Speech outdoors by the Delaware River, I'm huddled knees to chest on a flight of stone steps among friends. The screen ripples slightly in the wind, and the waters beyond are a hypnotic royal blue.

bribery
He flops onto the ground and refuses to go further, but with the promise of cookies at the top of the hill he's back on his feet, grudgingly.

diversion
To stave off his fit of fussiness and tears I change his position every so often. I stand him up on the kitchen table, so he has a prime view of the backyard and of his older brother's elaborate monologue on war tactics. Then he sits on the table, his fist clutching my index finger. Next he finds himself on a soft chair, standing again on my lap and bouncing slightly to the rhythm of the William Tell Overture. I wonder what he makes of all these shifts in perspective.

grisaille
On our walk back some blocks are silent and brightly lit. Others rumble with noise and people packed around tables outdoors. The parks are shadowed and secretive. We watch the lights fade out in a church.

hiking
We find spiders, red and orange mushrooms, a bed of ferns splashed with sunshine, and trees that have tipped into the embrace of other trees. There are also slabs of rock over a trickling stream and stones set in a shaky stairwell on the hillside.

scouting
At the bookstore they fan out, searching for chapter books, picture books, bargain books on military history. Their voices drift from different pockets, across shelves, announcing discoveries and asking others to come look at curious finds.

shearing
I'm on the verge of something - I don't know what – but in spite of my fear I'd like to find out.
Posted by HKatz at 7:08 PM

The life of a bohemian dog redux 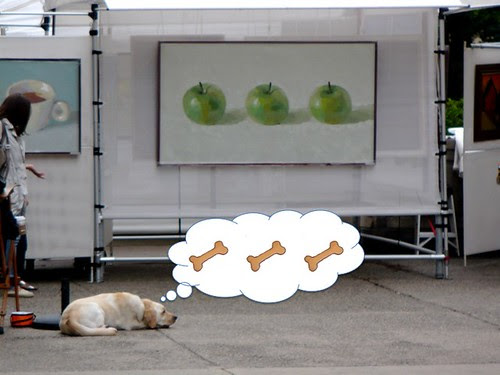 Someone very near and dear to me adds his interpretation to this photo.
Posted by HKatz at 7:56 PM

Synopsis
Canon Hubert Boxdale has inherited a large sum of money from his step-grandmother, Allegra (known to the family as "Great Aunt Allie"). He's reluctant to accept the money, because he was never sure about Allie's innocence in regards to the death of his grandfather; though she wasn't convicted in court, people always suspected that she had murdered her husband to obtain his fortune. Hubert asks his godson, Superintendent Adam Dalgliesh, to reopen the decades-old murder case and see if he can settle the question of Allie's innocence with certainty.

Some reasons to read it

Other recommended tales from The Oxford Book of English Detective Stories are Death on the Air (by Ngaio Marsh) and these stories here.
Posted by HKatz at 8:38 PM

ataraxy
We find a rose garden and a magnolia garden facing each other across a quiet street. Both are past their season. Both are mostly empty. A breeze shimmers through them.

disclosure
I share as much of the truth as I can bring myself to without distressing them unduly.

loll
It's a happy lazy day, when the sun pounds through my head; I play Scrabble, fight off sleepiness, and read out loud from a chapter book about a pig in search of hot buttered toast.

municipal
They take me on a tour through their slowly growing Lego town. In the pizza parlor a Lego lady is firing up some pies.

trammeled
We glimpse The Thinker through a sprawl of planks and chain-link fencing. He's hemmed in.
Posted by HKatz at 4:25 PM 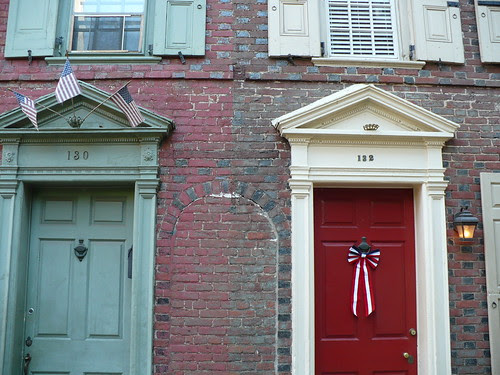 Doorways in Elfreth's Alley, Philadelphia
Posted by HKatz at 9:49 AM

cartographical
To solve the game I sketch out maps on lined paper with squiggly tunnels and shaky rooms, roads that leap too far right or left. I love it when I haven't yet explored everything, and there are blank spaces, terra incognita.

changeable
For the exact same task, twenty minutes isn't nearly enough time on one day but a decent amount of time on another.

inflation
The quality of a mediocre film improves when you watch it in good company.

interplanetary
When talking to different friends it can feel as if I'm bouncing around from one planet to another - some are brilliant and turbulent, others are spare and rocky, a few aren't planets at all but friendly moons with valleys, caves, and silver mountains. But they're all inviting, one way or another.

meandering
I like his free associative style of speaking. He says what comes to mind, but it's never anything malicious - at worst it's irrelevant, but mostly in an amusing way.

terpsichorean
At half past midnight, while walking past the brightly lit windows of a bank, I see a janitor inside mopping the floor. Several feet away his young daughter twirls around with a broom.
Posted by HKatz at 9:42 PM

Title: Death on the Air
Author: Ngaio Marsh (Edith Ngaio Marsh)
Where I read it: The Oxford Book of English Detective Stories (edited by Patricia Craig)

On the 25th of December at 7:30 a.m. Mr. Septimus Tonks was found dead beside his wireless set.

Chief Detective-Inspector Roderick Alleyn investigates the death of a man who was apparently electrocuted by his own radio. As it becomes clear that this wasn't an accident, Alleyn needs to sort through a houseful of suspects including the wife and children, servants and employees, and friends of the family. Septimus Tonks was a cruel tyrannical man with no shortage of people who feared and despised him. Alleyn's investigation uncovers secret relationships, dysfunctions, and the wreckage of an unhappy home.

Some reasons to read it

Other recommended tales from The Oxford Book of English Detective Stories are Great Aunt Allie's Flypapers (by P.D. James) and these stories here.
Posted by HKatz at 11:45 PM

A documentary about little kids on an underdog soccer team (what would be a little league team here in the U.S.). They haven't scored a goal yet. They speak with seriousness and passion about the game; failure isn't fazing them. They're also having fun, as are the people who coach them.