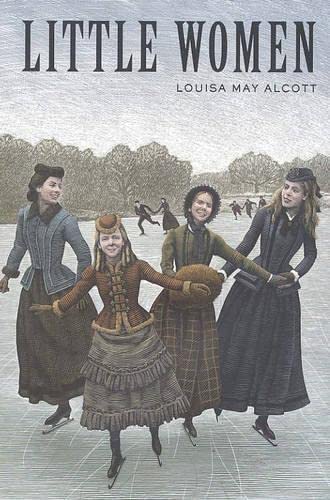 Somehow my American girlhood went by without a single reading of Little Women. So for the Classics Club Challenge, I read it. I can't react to it anymore the way I probably would have as a teen, though I know I would have strongly identified with Jo and enjoyed the book as a whole.

What struck me, reading it now, is how throughout the book there's a tension between two authorial voices. It's almost as if there are two different books in Little Women, one of them brighter, more picturesque and calling more attention to itself, and the other one a subtle, shadowy book that adds disquiet to the story.

The vignettes in the lives of the four sisters - Meg, Jo, Amy and Beth - often get wrapped up neatly. Though Alcott's characters come across as real and not like cut-out figures serving as moral examples, there's a tidy lesson from many of these episodes. It's what you'd expect in a 19th-century book geared towards a younger audience; the girls need to become proper little women. On the other hand, throughout these vignettes there are some darker currents and some sources of tension that persist even after the tidier resolutions. Sometimes the text is sentimental, even verging on treacly; other times there's a surprising wry humor and unease.

Let's look at Jo, for instance. While capable of great devotion and care towards others, she's also the most spirited and unladylike of the girls and wishes she could have enjoyed a boy's greater freedom. Like Alcott, she's a writer. Jo settles into a more conventional role at the end (mothering boys, when she can't travel much or go to school like one) - though at the same time she keeps her ambitions to write. The resolution to her story is complicated; she has made major concessions to what's expected of her as a proper little woman, but her old restlessness and dreams are by no means entirely tamed (what will become of her dreams is left open-ended).

Death, poverty, the conflict between what you want or need for yourself and what's expected of you - all of these the novel touches on, in a more tidy way front and center, but with the rawness at the edges, unexplored territory on the margins. Alcott was deeply familiar with all of these themes and with the messiness of life. And the fact that she lets this untidiness into her book to varying degrees, and gives her own strong personality some room to play throughout the text, keeps it from being only charming or sentimentally affecting in a simple way.

I'm sorry for the nearly month-long absence on this blog. The reason was a combination of lots of work and a needed blog break.

anticipant
She peers into the audience, her face nervous and expectant, knowing her family will be there but needing to see them.

crestfallen
"I stink at this," is what one child says every time she doesn't get something right the first time. Who is she echoing?

easy-going
She sits on the floor in her power suit, at ease when kids tumble around her legs.

huddled
They're the same type of people - same background, same lifestyle - so it doesn't matter what they say to each other; they're happy with the knowledge that they're the same and that their conversation will be safe.

pathetically
Out of pity I buy a small stuffed animal with lumpy ears. A dog, I think. An aspiring dog.

restorative
The clean scent of linens in a drawer.

true
While the others are match sparks and unsteady flames, she's a lamp, steady and gentle in the dark.
Posted by HKatz at 11:12 AM