audacious
A cockroach scales the chrome and neon walls of the ice cream parlor like a sci-fi hero.

bluster
A storm whips the houses, cloaks the streetlights.

chagrin
She doesn't want to admit to buying the junk food for herself, so she claims it's for friends or family. It gets me annoyed with how much guilt and shame is associated with food (with some brands even labeling their products 'guilt-free'), as if shame or guilt will reliably motivate people to make healthier choices long-term. And as if it's shameful to have some dessert.

choo-choo
He asks me what I'm sentimental about. The first thing that comes to mind: trains. I still have sentimental ideas about taking a train trip across the US. I know I'm romanticizing Amtrak. Amtrak, of all things. I know about the possible difficulties of long distance train travel, especially in this country, where it's not a popular way to get around. But I really like traveling by train (even in subways sometimes, when the cars aren't crowded). For more than several hours? I don't know. I haven't done it yet.

fostering
What makes for a good friend? Someone who can respect you and accept your essential self. Who can challenge you without belittling you. You can grow, and they will not insist that you need to stay the same or make yourself smaller to suit them. They will not demand that you stick to an outdated version of yourself or a version of you they've built up rigidly in their minds.

sensuously
She presses a lemon to her ear, pauses, puts it down. Picks another one to listen to and decides to keep it. Then she moves on to the peaches. She rolls them against her cheek, one by one, until she finds the peach with the most pleasing caress.

… she would cut off her arm for these sisters of hers with the same knife she held at the tenderest spot in their hearts.

That's Cleo, the main character of a book that brings to life the world of Boston's black elite shortly before and during the First World War.

Cleo is originally from the South, but after making her way north learns the social refinements of northern cities and marries a down-to-earth businessman, Bart Judson, whose money helps her maintain her social airs. She doesn't see herself as black so much as Bostonian, and wants to raise her daughter, Judy, to also be a little Bostonian lady.

Dorothy West's The Living Is Easy, which I read for the Classics Club Challenge, is fascinating for two main reasons.

From a walk a few weeks ago, several miles along the Hudson River on the west side of Manhattan. 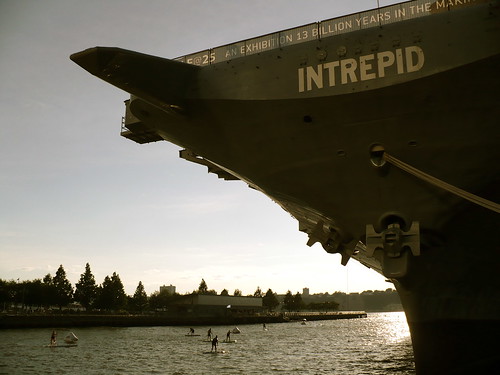 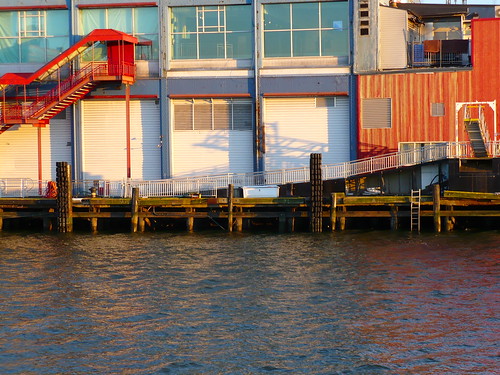 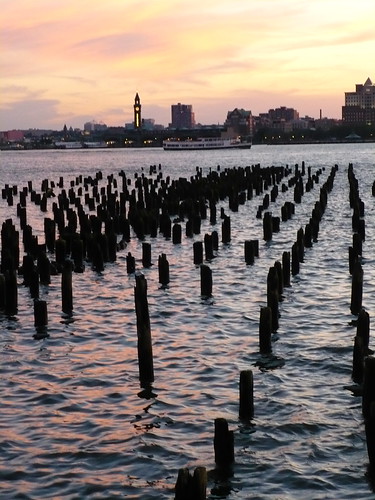 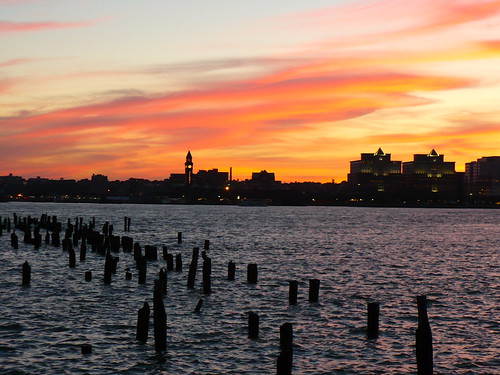 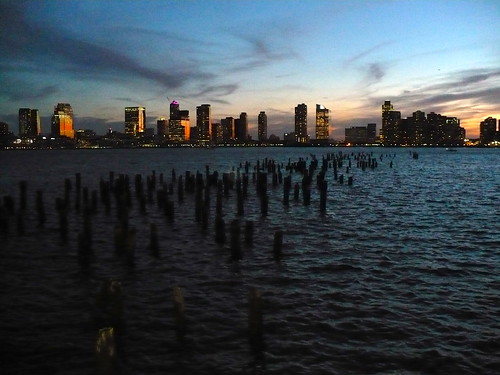 application
Tentative fingers and solemn attention as she plays a two-handed piece on the keyboard.

finds
Blue shells, brown leaves and a star-shaped badge with a rusted pin.

observance
A hardheaded waitress serves clam chowder to one, fried chicken and a heap of pasta to another. Raises her eyebrow as she hands me my meal, an iced tea.

shifts
His car smells like cake air freshener and newsprint. Magazines slide around under my feet as he drives.

showered
A hole has torn open in the clouds. Light soft as talc sifts down to a bare tree by the water.

trimmed
They can take ten photos of a scene I'm in, and I won't appear in a single one.

variegated
Colonies of salty pools among yellow weeds and striated rock.
Posted by HKatz at 11:56 PM

Title: Death of a Traveling Salesman
Author: Eudora Welty
Where I read it: The Oxford Book of the American South

R.J. Bowman, a traveling salesman, lives in a string of impersonal hotels with no one to help care for him when he's sick. His life hasn't made an impression on anyone. After almost driving his car off a cliff in a backwoods area, he finds himself, shaken and unwell, in the home of two people who live primitively. But even in that impoverished home, he discovers intimacy - an unspoken, simple closeness between people.


These people cherished something here that he could not see, they withheld some ancient promise of food and warmth and light.

Although they're hospitable to him, he remains outside the circle of domestic warmth. And he wonders why he doesn't have such warmth in his own life. It's a simple thing, found even in the most remote places, so why not in his life? What he's seeing is basic to life but absent from him; how is he still alive?

Title: The Museum
Author: Leila Aboulela
Where I read it: The Anchor Book of Modern African Stories

Shadia, a Sudanese woman, attends a graduate program in statistics in Aberdeen. Throughout the story, she suffers from a lack of connection to anyone. What she misses most about home aren't the people (including a fiancé who talks at her over the phone); it's the familiar places and experiences of day-to-day living she's homesick for.

It's not as if home is in all ways attractive to her. At home, there are people - like her mother and her fiancé – who try to pin her down, make sure her life fits a certain mold. (At one point, she mentions childhood visits with her father, who had left her mother years before, and how she enjoyed those visits because he kept mixing her up with her sisters; she could pretend to be different things with him, because he didn't have a fixed idea of who she was or should be.)

At the same time, Scotland is alien to her. In the course of the story, she develops a tentative friendship with a classmate, Bryan. Bryan's interest in her leads him to try to understand her culture and do some things that would make him more appealing to her. However, there's the possibility that Bryan, who hasn't traveled much but really wants to get out of Aberdeen, is attracted to her because she's exotic and represents an escape. How much about her can he understand?

At the end, he tries to shows his willingness to understand by inviting her to a local museum where there's an exhibit on Africa. But it's a jarring visit for Shadia, because the exhibit focuses on the exploits of European visitors and the kinds of animals one would see on the African continent. Where are the people? There's nothing of life at home that she recognizes.

Shadia's life is in a state of suspension between cultures, and no one seems to know who she is and what she really wants (and it's not as if she's clear on that herself). She misses home, but there are traps waiting for her there - stifling relationships. Could she make a home in Scotland and also open Bryan's eyes more? Or would that be too difficult, maybe even impossible for her?

Title: The Prospect from the Silver Hills
Author: Jim Crace
Where I read it: The Art of the Story

The main character struck me as already odd and alone when he starts his isolated job. He works as an agent for a company that's prospecting for precious stones and valuable metals in a remote region. His job is to examine samples of earth that have been dug out to see if there's anything promising in them.

But what does it mean that he's odd, and how does this oddness intensify? He imagines a wife and family for himself. He doesn't fit in with the work crew, who initially make some attempts to socialize with him. And how he experiences the land is increasingly at odds with how the company wants him to see it. He develops a sensual appreciation of what's dug out of the earth, and he restores it in unique, aesthetically pleasing ways.


A stone of apple-green he removed and walked with it into the valley where in a cave there were lichens of the same colour. A fistful of grit he scattered in the grass so that it fell amongst the leaf joints like sleet.

His sense of what is valuable no longer has anything to do with what other people find valuable. He's concerned with what looks good, what fits, and whether a place seems whole and restored.

He sees things in the land that no one else sees. He's cut himself off from other people and established his own world and his own system of values. That's his loneliness, his madness and vision. It highlights some of the arbitrariness in the values other people assign to things. Maybe this lonely man saw no way to find the things he valued within established society, so he made a world of his own - and, through isolation and sleeplessness and his own vision, he found a home permanently there. Until he's one with the hills, like a figure in folklore, not entirely human.

(As I was writing about this last story, it brought to mind Virginia Woolf's "Solid Objects," which I wrote about here. There's a similarity in the characters' obsessions about what they find in the earth, and the increased disconnect from society and its values.)
Posted by HKatz at 4:58 PM

disencumber
She talks like someone who hasn't had anyone hear her for a long time.

distorted
The grand hall is dark and full of music that rakes the air apart. Sickly green light slides down the walls and swirls around the ceiling.

enclosure
She is lying to others to give herself space to heal.

insistent
The unreasonable expectation that my friend will immediately run out and get a book I recommended, read it at once and respond to it with the same enthusiasm I did.

judged
"It was not the best day ever," she says, pronouncing judgment on a family outing.

loathsome
Protracted shame is one of the worst emotions anyone can feel. There's no hope in it. It's a dirty, secretive worm. That's why abusive people, whether consciously or not, are so eager for others to feel this; it keeps people suffering quietly, convinced of their own defectiveness.

pulverize
Music in waves that pound my eardrums to sand.
Posted by HKatz at 1:44 PM