A few weeks ago, I visited Green-Wood Cemetery in Brooklyn. It's a National Historic Landmark, and various well-known people are buried there, including Samuel Morse, Elias Howe, and Leonard Bernstein. And Boss Tweed, who is one of the city's most famous corrupt politicians.

There are also thousands of Civil War veterans buried at Green-Wood. Among them are two brothers from Maryland, Clifton and William Prentiss. 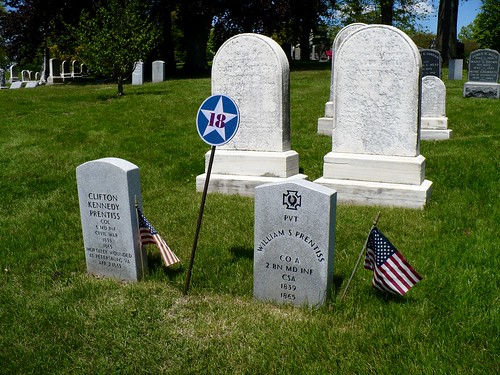 They fought on opposite sides of the war, Clifton for the Union and William for the Confederacy. Both died of injuries sustained at the Battle of Petersburg. Their nurse at Washington's Armory Square Hospital was Walt Whitman. And I didn't realize it until a few minutes ago, but he wrote about them in Specimen Days: Two Brothers, One South, One North.

consideration
Most of the time what people need is for someone to hear them out. Not immediately jump in with a solution, or a way to rationalize or explain away a problem. Just someone to sit and listen patiently and with a sincere effort to understand.

flicked
Our conversation doesn't mean much. All it does is swat away the silence that would otherwise creep in between us.

sanguinity
There's little to see by the highway except for thin trees and industrial lots. But the flow of traffic is easy, and the sun is out, so there's a light feeling in me, and the world looks beautiful.

selfhood
I have misgivings about the phrase "the real you." It's built on an idea that there's some private version of you that's real, and the rest of you is relatively fake. The thing is, all of you is "the real you." Your different facets, and the way you modify your behavior in different contexts. People can be charming in one situation and behave monstrously in another; or maybe they behave with kindness across a wide range of situations. Maybe part of "the real you" is a tendency to profess opinions that you don't believe in when you're among people you want to impress, while in other situations you speak more freely. One reason I dislike the phrase "the real you" is that people sometimes use it to distance themselves from parts of their personality they don't want to think about. Or they use it to portray someone in an oversimplified way.

slugging
He pauses the TV and stands beside it to give me a lecture on baseball stats. He explains what each number in each little box means. Maybe he thinks he can convince me to stop being indifferent to baseball. I appreciate his effort to involve me in his interests, and the way he steps into a teaching role with enthusiasm. I still couldn't care less about baseball.

warmup
Having my arm used as an impromptu ballet barre.

welcomed
They made me feel at home. That's the warm, lovely feeling I take with me after visiting them.
Posted by HKatz at 6:48 PM

guffawing
The three of us on an old couch, laughing until our eyes sting and our stomachs cramp.

maritime
As the bathtub fills, it becomes a sea of rising toys: capsized boats, smiley animals, figurines peering into the soapy deep.

nest
The room doesn't get much direct sunlight. The light that fills it is soft, and partly filtered through branches. On powder-white shelves there are books, seashells, perfumes and lotions, homemade art, flowers, and small gadgets.

nibble
I like the buffet-style meal, where at least ten dishes are spread out on the kitchen counter, and I take a tiny bit of almost everything.

partiality
I read to him for hours, and he gets teased about it. They tell him he's choosing boring books that no one who's older than him could like. For a moment, he looks uncertain. "My books are interesting!" he insists. And I back him up. He shouldn't feel bad about the books he loves. And some of them are interesting, even for adults. Even when they're read more than once.

querying
I like seeing how their understanding of life develops. How they think about their own experiences, make sense of the world, question ideas that don't seem quite right.

zoology
He won't be satisfied if you tell him you saw a shark. He needs to know the kind of shark. Blue shark, lemon shark, whale shark. He even has a reference book that he can't read yet, but that he's had others read to him so many times that he can point you to the right page and have you educate yourself about the proper shark. I learn about animals I didn't even know existed.
Posted by HKatz at 10:16 PM

As Seen Through These Eyes (2008): Confronting Annihilation with Art

"As Seen Through These Eyes" is a documentary about the Holocaust, and specifically artists, musicians, and writers imprisoned in ghettos and concentration camps.

Sometimes, their artistic talent saved them from death. For instance, one man played the harmonica very well, and a camp commander requested regular performances. One woman was singled out by the infamous Dr. Mengele in Auschwitz to paint portraits of the camp's Romani population; while she saw their beauty, what Mengele was interested in was the exact shade of their skin and shape of their ears.

Other people were murdered because of their art. For instance, they may have been kept alive in a ghetto to draw up propaganda posters, and were caught also secretly sketching the scenes of misery and brutality around them.

Art also became a way for people to grapple with their trauma, during and after the Holocaust. They wrote, painted, and performed music that expressed their torment or that shared their longing for beauty and life. Sometimes art was their one form of freedom and their way of staying sane. One musician described the importance of playing the fiddle. Because his experiences in the camps felt like an uncontrolled bass rhythm inside of him, maybe the fiddle would balance out the bass and bring some harmony into his life.

The movie shows many examples of art and presents interviews with survivors. It's also narrated by Maya Angelou. Altogether a beautiful, moving documentary and worth watching at any time. I'm writing about it now because Yom HaShoah (Holocaust Remembrance Day) begins this year at sundown, May 4.
Posted by HKatz at 9:35 PM

burnished
She speaks like a job applicant. Her voice is smooth and bright, and she's stocked up on polite exclamations. I wonder what she sounds like angry or melancholy. Or better, honestly in love with something.

debate
They act like dogs displayed in a pet store. In short turns, they strut and yap, trying to get a reaction from customers. They respond to cues. When they hear a word, they perform a trick or bark in a certain pattern. "The Economy." "Yap, yap, yap." "Immigration." "Woof! Woof."

dodgy
"Who are you?" she says. And her friend replies, "I'm afraid to find out."

reminding
We're in a warm, dense forest. We could be miles from the city. Except sometimes, through the trees, we hear rap or reggae. Or a truck rumbling by.

scaly
The towering shrubs in the forest look like reptiles, rippling green and gold as they sun themselves.

unexpected
I find myself in a situation, that isn't trivia game related, where knowing the capital of Zambia comes in handy.

vestiges
Beyond the imposing gate is a field of weeds, waist-high. All that's left of a formidable estate.
Posted by HKatz at 3:36 PM