Nonfiction Book of the Month: Why Nations Fail by Daron Acemoglu and James A. Robinson

The authors advance the thesis that the primary reason behind a nation's economic failure or success is its political system. For instance, does a given society have more inclusive political and economic institutions that allow meaningful participation from a broader variety of people, including various groups with competing interests? Or is the distribution of power much more limited, with those in power extracting wealth from others and using it largely to stay in power and advance their own narrower interests?

The authors offer a wide variety of examples from all different parts of the world and periods in history. For example, they discuss why the Industrial Revolution took off in a place like Great Britain, while technological progress was slower in other parts of Europe (with progress generally much more limited in Eastern vs. Western Europe). What was it about the changes in Great Britain's society leading up to the late 18th and early 19th century that helped lay the groundwork for the Industrial Revolution, especially given that Britain was poor and underdeveloped for so much of its history? What was the legacy of colonialism in different parts of the world, given the different kinds of political institutions put in place by colonial powers (including the way they used existing institutions in the lands they took over)?

The editing of the book could have been much better. The book often gets repetitive, sometimes with the same point repeated across consecutive paragraphs. Still, it's a thought-provoking and worthwhile read.

An orchestra of recycled instruments

The kids in the video live in Cateura, Paraguay.
Posted by HKatz at 12:29 PM

This screwball comedy features a linguistics professor, Bertram Potts, played by Gary Cooper and a nightclub entertainer and gangster's moll, Sugarpuss O'Shea (what a fabulous name), played by Barbara Stanwyck.

Potts, who's working with several other professors to put together an encyclopedia, is gravely innocent; he's part man, part schoolboy. When he goes around town making careful note of new slang to include in the encyclopedia, he winds up in a club where O'Shea explodes onto the stage to the drumbeats of Gene Krupa. That scene, with Stanwyck wearing a costume that looks like a barely contained supernova, is one of the best in the movie; the music is great, because yes, that's really Gene Krupa accompanying her, first on drums, then on matchsticks.

Stanwyck's sex appeal depends in large part on the sharpness of her wit and the look in her eyes, not to mention how comfortable she is in her own skin. As a brilliant actress, she also shows us - largely through minute changes in her facial expressions - how she's slowly falling in love with the stodgy Potts, when at first she just thinks of him as a dope. As for Cooper, he's good at pretending to be a man who's convinced himself that he's just fine with celibacy, while looking both quietly terrified and deeply intrigued as O'Shea slinks into his life.

Stanwyck and Cooper work so well together and enjoy a strong supporting cast: the other professors, who are all cute old men, and O'Shea's boyfriend for much of the film, Joe Lilac (Dana Andrews), a gangster trying to avoid getting arrested for murder. Much of the dialogue is funny, as when O'Shea is trying to convince Potts that she isn't feeling well and needs to stay the night ("I'm a pushover for streptococcus"). Some of the screwball comedies I've come across are uneven in quality or less funny than they're made out to be, but this one is enjoyable throughout.

*Image links back to its source (Wikipedia).
Posted by HKatz at 10:32 AM

album
Dozens of photos drying on the living room floor.

bargaining
He has too much chocolate cake on his plate, so she takes some of it from him. Instantly, his mouth quivers and his eyes get moist. She puts it back and gives him an endearing smile. "Do you want to share it with me?" she says. "Can I have some of it?" He considers for a moment, then breaks off the tiniest crumb and places it on her outstretched palm.

brat
My suspicion is that I'm not going to run into her again - at least, not any time soon. I'm glad we part ways bickering, because anything else would be too sentimental for us.

edifice
Keeping to myself, sharing only general information, is a form of self-protection. No amount of shouting or guilt-tripping is going to bring the walls down.

exposed
Kids have a great sense of timing. This one gets out of bed to get a cup of water just as the most violent scene in the movie (with nudity thrown in for good measure) is underway.

hyped
It isn't an honest movie. It starts off with some interesting characters, flawed and suffering from psychological problems. Were it a better movie, it would have stayed true to them throughout. Instead, the tone about halfway through shifts to a generic romantic comedy, with little actual comedy. These characters could have gotten a hopeful or happy ending, but one that was still true to them. Instead, the filmmakers ignored their complexities and buried them in cliches.

off-the-cuff
Her wit is maturing, and it's wonderful to witness.
Posted by HKatz at 9:59 PM

Worth Watching: The Trip to Bountiful (1985)

The Trip to Bountiful has one of the most beautiful opening scenes I've ever watched: a mother and her young son running through a field of bluebonnets. They're full of life. They look as if they could run forever.

Flash forward a few decades, to the 1940s. The mother, Carrie Watts (Geraldine Page), is now an old woman. She lives with her son, Ludie (John Heard), and his wife, Jessie Mae (Carlin Glynn), in a small Houston apartment. Ludie isn't the carefree boy he once was; he's recovering from an illness and trying to get a promotion at work. He and his wife haven't been able to have children. Jessie Mae is a self-centered, petty woman, who needles her mother-in-law at any opportunity she gets. I also sensed resentment in her, that she has to live with her mother-in-law in close quarters, and that Carrie makes her feel inadequate as a homemaker and wife. The two just get on each other's nerves, and Ludie is, for the most part, tired and withdrawn.

Living in that little apartment is driving Carrie insane; she's reduced to being a child, squabbling with her daughter-in-law. She's cut off from the only kind of life that ever gave her meaning. Realizing that she's in poor health, she's overtaken with the desire to see her old home again in Bountiful, Texas, out in the country. She won't let her son and daughter-in-law stop her.

aflutter
The keeper of keys has bats in his belfry.

glowworm
He talks and talks, and the point of his talk is just outside our reach, like a firefly winking in and out of existence.

paper-thin
Her smile is brittle. She's only sure of herself among books.

porous
From spirituality to bagels. I'm walking the surprisingly thin line between profundity and absurdity.

saturated
The tulips are in Technicolor, saturated in red and yellow.

storyteller
Rumpled hair, a coffee cup loose between his fingers. The familiar crinkle in the corners of his eyes.

tether
During the group meditation, my mind floats and expands, then abruptly contracts. The process restarts. The mind rises like a balloon until it reaches the end of its string. Then it descends and hits the floor.

In the society of daffodils 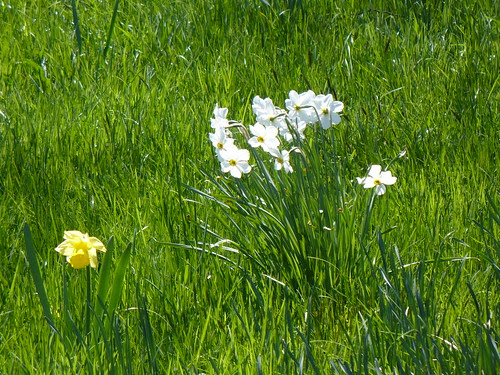 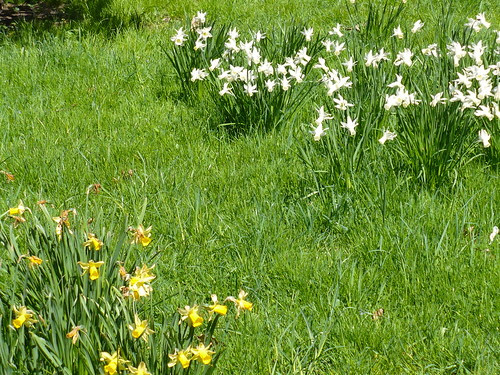 And sweet consolations whispered to friends and lovers: 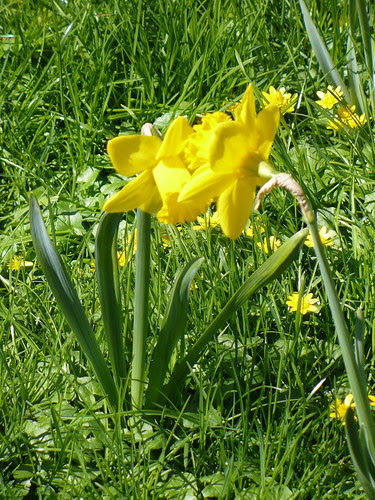 abandon
Playing freeze tag by the train stop, the kids slither onto the platform and sprint across grassy lots. They laugh and scream and occasionally curse.

balance
The cherry tree holds light and shadow between its branches in perfect stillness.

gaiety
It isn't an orchid show, it's a masquerade ball. Each orchid, a prince, a duke, an empress, wears a vibrant mask and sways to music in the garden.

grate
His face is pink and stubbled, and his laugh has as much joy as he can force into it.

perianth
The branches are weighed down by a mass of magnolia blossoms. Soon the blossoms will fall to the ground and rot, but now they're still in their full flush, a decadent pink, inviting people to draw them aside as a curtain and seek privacy.

swept
The sound of the waterfall washes everything away, all the noise in our heads.
Posted by HKatz at 6:48 PM

In Born Yesterday, Billie Dawn (Judy Holliday) slowly emerges from the 'dumb blonde' persona she's buried herself under for years in order to get by in life. At the start of the movie, she's arrived in Washington, D.C. with her boyfriend, Harry Brock (Broderick Crawford), a crooked businessman who's trying to bribe his way to greater political influence. Brock was born in Jersey and is in the junk business, sort of a 1950s Tony Soprano.

Billie drifts through life with her mind turned off. She gets furs and jewels and verbal, and sometimes physical, abuse from Brock, who also uses her as an unwitting stooge for some of his deals. However, he finds that when they try to mingle in D.C. society, she comes across as too crass and ignorant. (So does he, but he thinks she's the only one who needs more polish.) His solution is to hire a journalist, Paul Verrall (William Holden), to teach her about culture and proper speech.

Paul gives Billie a lot of books, shows her historic sites in D.C., and talks to her like one human being to another. She starts to think for herself, and they fall in love.

I like that Billie isn't dumb; she just acts dumb. Once she becomes less ignorant and naive and learns to think for herself, she's a force to contend with. She's also still recognizably Billie, not some polished socialite (this isn't My Fair Lady). I also like that Paul isn't her 'white knight.' He doesn't charge in and rescue her or tell her what to do, other than to keep reading and thinking. She figures out what Brock is up to on her own and decides to leave on her own terms, while thinking of a plan for how to stop him; only then does she recruit Paul to be her accomplice.

Holden is a sweetheart as Paul, and Crawford plays Brock both as a comical ignoramus and as a genuine menace who only understands two kinds of power: money and physical force. But it's Holliday's performance that the movie rests on, and she holds it together. Like the movie as a whole, her performance is a skillful blend of comedy and drama, as seen in the way she can toss off a funny line and then, in a heartbeat, look lost and vulnerable. Not all performers, or movies, would handle these transitions well.

*The image links back to its source (Flixster Community).
Posted by HKatz at 10:12 PM 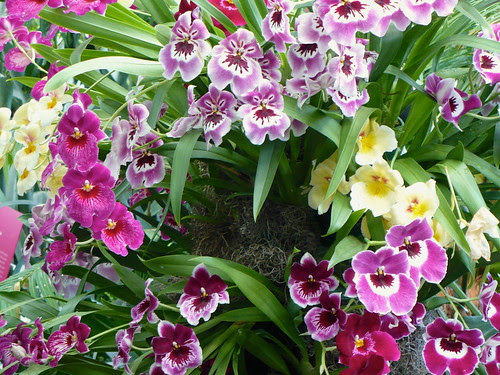 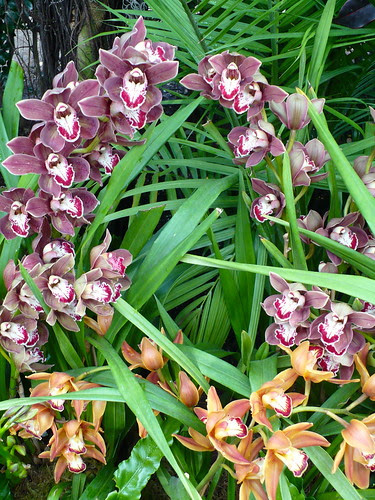 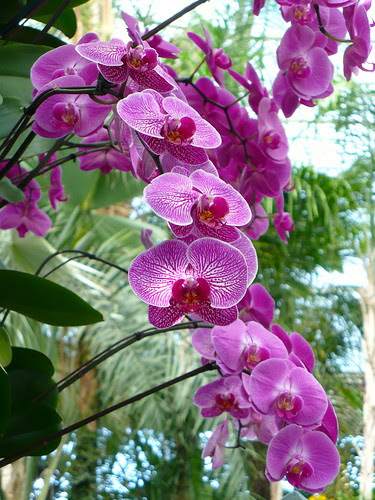 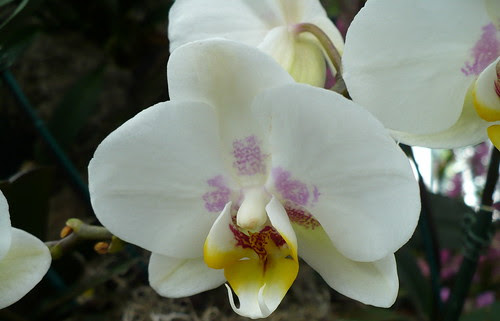 After the show, these orchids got donated to nursing homes and hospitals in the Bronx.
Posted by HKatz at 3:49 PM