Worth Watching: The Trip to Bountiful (1985)

The Trip to Bountiful has one of the most beautiful opening scenes I've ever watched: a mother and her young son running through a field of bluebonnets. They're full of life. They look as if they could run forever.

Flash forward a few decades, to the 1940s. The mother, Carrie Watts (Geraldine Page), is now an old woman. She lives with her son, Ludie (John Heard), and his wife, Jessie Mae (Carlin Glynn), in a small Houston apartment. Ludie isn't the carefree boy he once was; he's recovering from an illness and trying to get a promotion at work. He and his wife haven't been able to have children. Jessie Mae is a self-centered, petty woman, who needles her mother-in-law at any opportunity she gets. I also sensed resentment in her, that she has to live with her mother-in-law in close quarters, and that Carrie makes her feel inadequate as a homemaker and wife. The two just get on each other's nerves, and Ludie is, for the most part, tired and withdrawn.

Living in that little apartment is driving Carrie insane; she's reduced to being a child, squabbling with her daughter-in-law. She's cut off from the only kind of life that ever gave her meaning. Realizing that she's in poor health, she's overtaken with the desire to see her old home again in Bountiful, Texas, out in the country. She won't let her son and daughter-in-law stop her.


Geraldine Page's performance is amazing, and reveals both the complex character of Carrie Watts and the struggles faced by elderly people more generally. "For her own good," Carrie is kept from traveling and treated like a child. She sees no future for herself, and no one seems to care about her strong connections with the past. The first sympathetic ear she gets in this movie is from a young woman, Thelma (Rebecca De Mornay), who sits beside her on a bus she's taking in an attempt to get to Bountiful. Thelma is the daughter-in-law (or daughter) Carrie wishes she'd had. 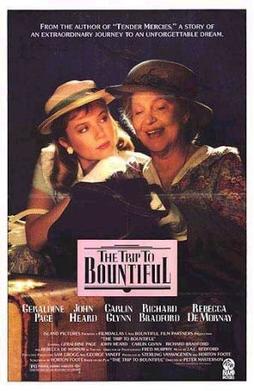 Was Carrie's past life in Bountiful free of heartbreak? In her conversation with Thelma, she brings up some cruelty and lasting regret that she experienced as a young woman. But she was also alive in that place. It was hers, with all of its pain and thwarted longing. She clings to these old memories, infusing them with goodness. She doesn't want to hear that it's all gone: her loved ones, her old friends and neighbors, even the town itself, slowly being eaten away by the wind and grass.

Carrie, her son, and his wife are all trapped in some way in that little Houston apartment. What will Carrie's escape do for all of them? On the one hand, her attempts to revisit a time that's long gone seem futile, the efforts of an old woman who's going into the past because there's no future for her. On the other hand, her determination to see her old home is necessary for some peace and healing, a better understanding of what her place is in the world now. The characters confront their mortality and come out stronger for it. Carrie can see what has become of Bountiful, and her son can no longer deny his past. They really talk to each other, honestly, for what may be the first time in years.

The movie doesn't have an easy ending, which is one of the things I like about it. For the time being, the characters are alive. Maybe the best they can do is be kinder to each other as the world continuously changes and they move towards the day they'll pass on.