accented
Out in the hall a French woman and a Russian woman speak in English, their voices bright and cordial. Soon after, a Greek woman speaks boisterously on the phone, sometimes in English and other times in her native tongue. In a different time and place, two men from Ireland harmonize together on a stage and banter between songs.

limpid
On a day when heat chokes the air and cars snarl along the road, I listen to limpid music; it spills and flows over all the other sounds - horns, brakes, birds, the stutter of machinery, conversation, the creak of trees in the wind.

loop
We could easily have taken the bus, but why not walk? Without walking we wouldn't have as much time to talk, or see the river at thirty minutes to midnight, or come across that sculpture with the words carved into it from several different languages, French and Greek included.

pluvial
There's a primordial fury to the rain; it mashes up the ground, crackles on the windows, and clots the air.

sundered
In the wake of the storm, trees stretch out leafy and shattered on walkways, cars, and roof corners. Branches lie in all angles on the sidewalks and sometimes dangle in the embrace of other branches that have remained aloft and intact.

tunefulness
Music in a long dark room lit with candles in glass, the illustrations on the walls crowding around to listen in shades of red, white and black. With voices that fit well together the musicians sing about old love, new love, a laughing universe, what it would be like to be a work of art, and how they're traveling around in search of feet; at one point they invite a friend to jam with them on the guitar, and she's in a trance, so happy to be up there playing and part of the music.

wresting
It's a song he once knew by heart; now he wrestles different passages out of the piano. Whenever he comes to a lacuna in his memory, he sits with fingers splayed across his forehead and stares with a puzzled frustration at the keys.

From the mind of Lemuel Moody

The Portland Observatory is the last of its kind in the US - an old maritime signal tower, now preserved as a museum and as a great viewing spot overlooking Portland, Maine and the adjacent water and land. 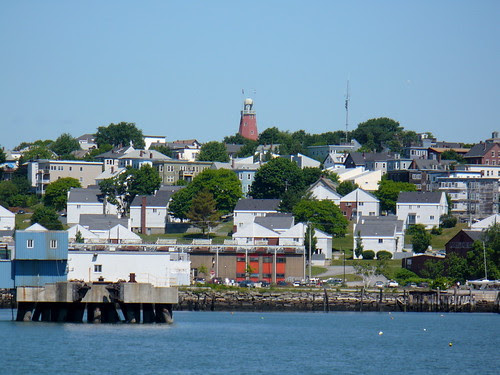 Before new technology came along and made it obsolete, you stood at the top with a telescope, sighted approaching ships, and used flags to signal how many and which kinds of ships were coming, so people on the docks could get ready for the arrival and the unloading of cargo. 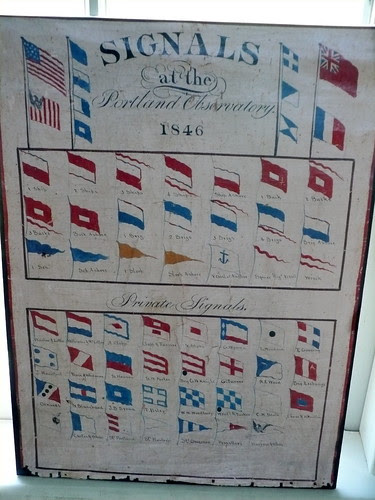 It was constructed and initially manned by a retired sea captain, Lemuel Moody. An enterprising and meticulous individual, he lived nearby with his wife and brood, who spent significant chunks of their childhood running up and down the stairs: 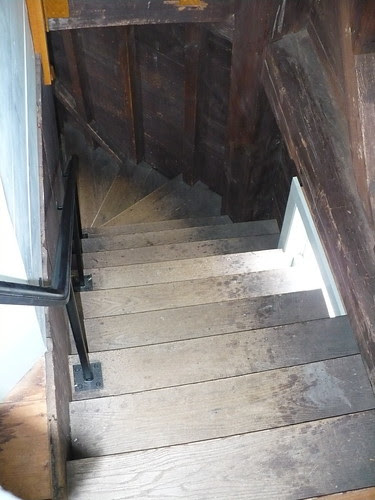 These days, along with footsteps, other sounds you hear regularly from the stairs are the words "watch your head", followed by a loud hollow thud.

The lovely views make up for the minor headaches. 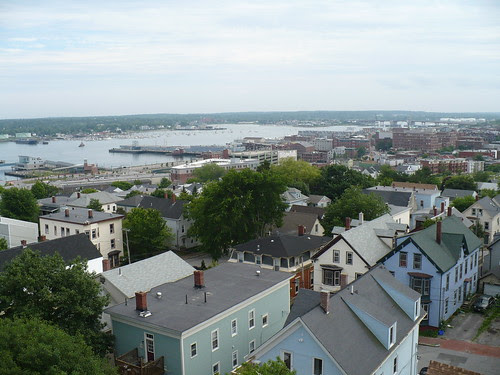 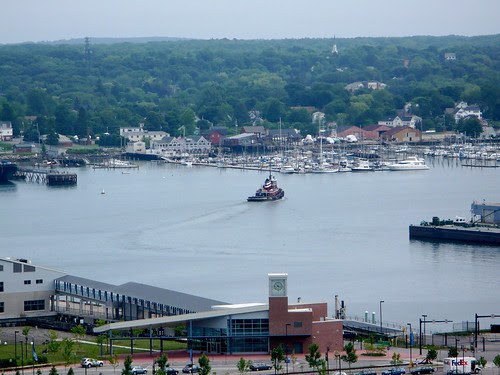 You can also spot patterns that at ground-level would go unnoticed. 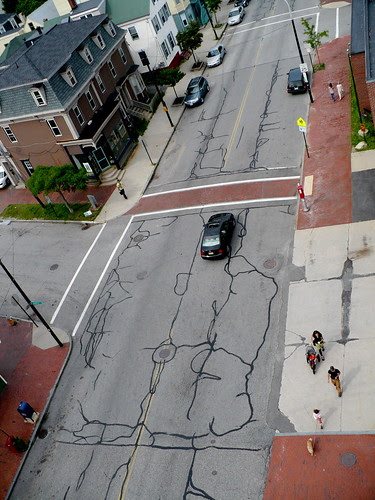 And once you're back on the ground, don't forget to look up. almost
Moments when I'm close to something, so close and I don't realize it, and later I know that I've turned away too soon.

effloresce
On nearly every street I come across roses. They grow in cluttered gardens, among scraps of metal and plastic toys. They poke through chain-link fences. They thrust themselves up the sides of houses, twine around trellises, and peek over porch rails. Their heads sometimes bow towards the bright green grass.

geometry
The strange shape of sunburns - circling my leg exactly where my socks begin, or my arms where my sleeves end; patching around my knees and calves where I didn't apply suntan lotion evenly, or framing my left wrist where my watch has kept the skin beneath it pale. My skin is sore in triangles, trapezoids, and ellipses.

lighthouse
In the daytime there's an elegance to it, perched on a rocky ledge above the rush and murmur of the bay.

seawater
When I approach the sea I try to guess what color I'll find it. A misty melting gray in the fog, or fracturing the sunlight on a clear bright day. A hard gemstone blue, or light blue with dark folds and white foam.

tranquil
At the peak of the old maritime signal tower, with a view of rooftops, sea craft, and water all around, I sit next to a soft-spoken guitar player. There's sunshine, music, and from time to time the clomp of people climbing the winding wooden steps.
Posted by HKatz at 11:51 PM

A bit of Boston

This week I took a few vacation days and headed to Portland, Maine (more on that planned for future posts).

I passed through Boston on the way back home and had enough time to walk around a little; these are some photos I took along the way between North Station and South Station.

Temple Street - a narrow, quiet lane, with lovely flowers and no traffic: 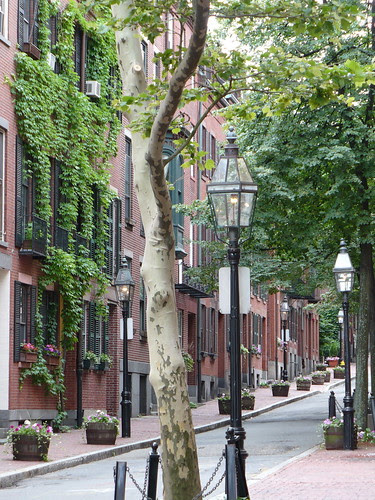 And at the southern end of the street, the State Capitol House: 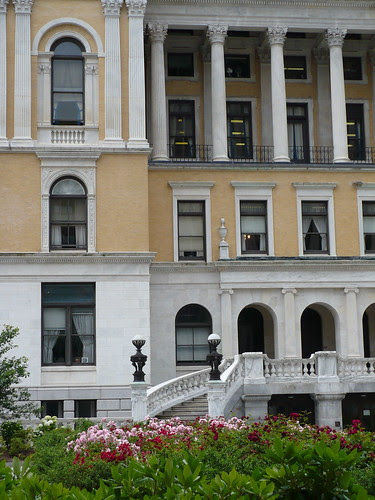 Let's zoom out and make it more imposing: 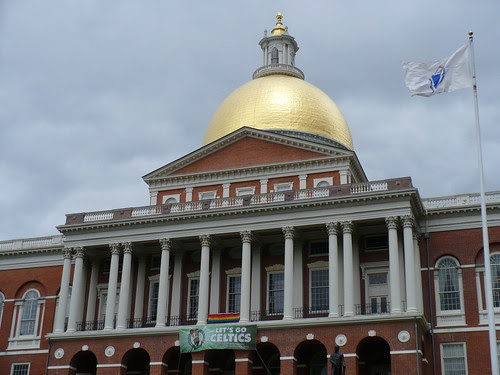 (Though it can't be too imposing with a "Let's Go Celtics" banner.)

Nearby businesses with political themes: 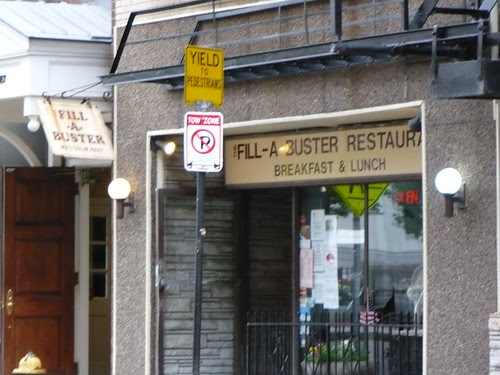 and a bar honoring the amendment that made its legal existence possible: 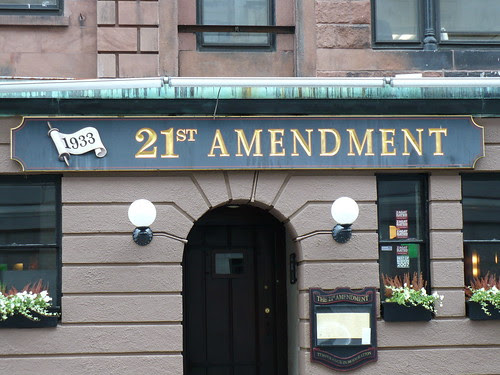 A group of students on a historical tour, with their guide in historical get-up. Can history ever successfully compete with cold sweet desserts? 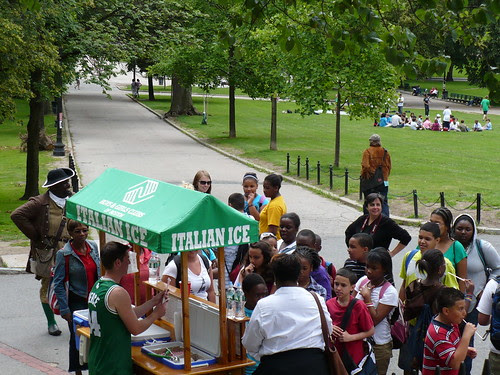 I rest here for a while. Boston Commons is a great place to crash and relax. 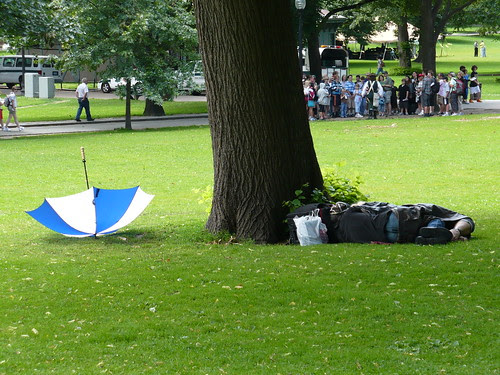 Or flirt beneath a fountain's cool spray. 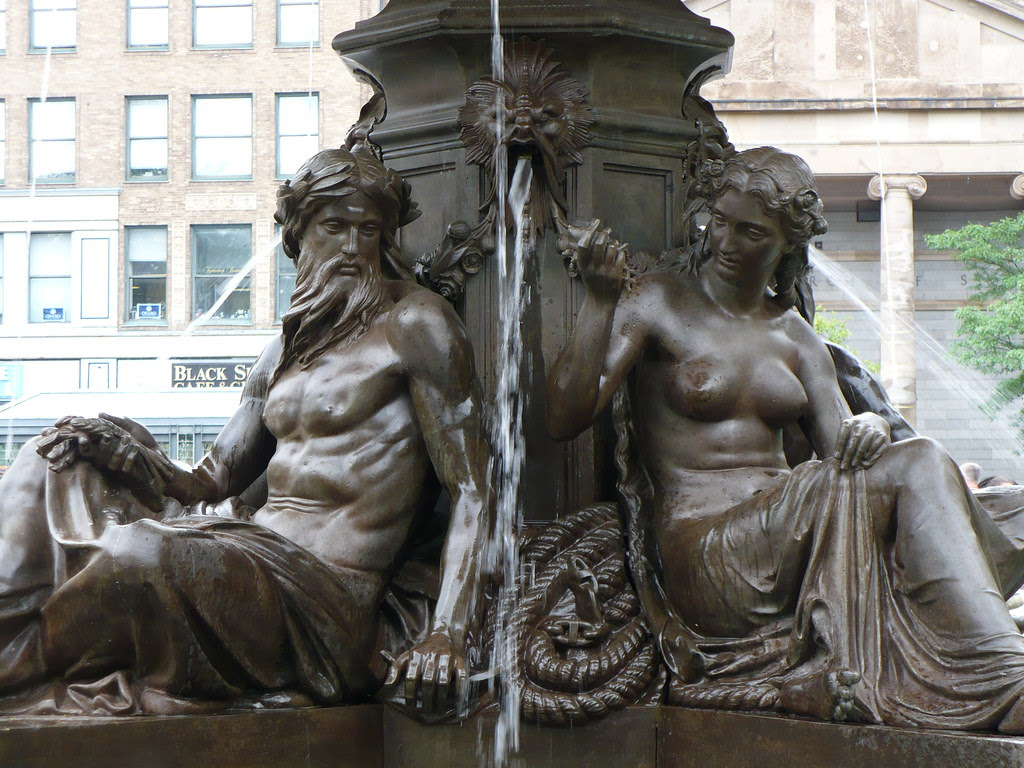 The enchantment continues in South Station: 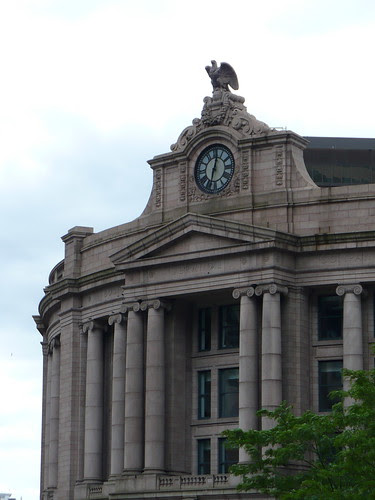 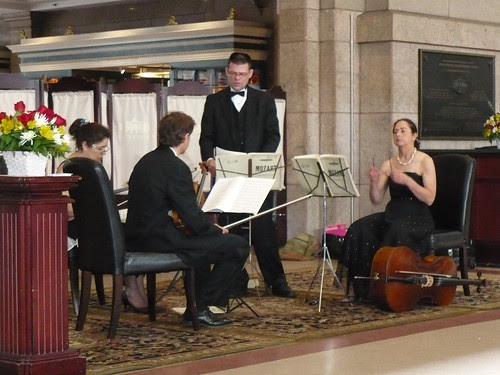 When so much of the news focuses on crime, deception and melodramatically bad behavior, it's great to read about people like Don Ritchie:

For almost 50 years, Don Ritchie has lived across the street from Australia's most notorious suicide spot, a rocky cliff at the entrance to Sydney Harbour called The Gap. And in that time, the man widely regarded as a guardian angel has shepherded countless people away from the edge.

bled
For a moment I think the cream-colored wall has shed blood. But it's a cardinal, swooping down from the roof in one liquid red glide.

blurry
It's an inarticulate day; rain is slurring down the windows.

marionettes
Out on the sunny lawn they grunt and kick high, their fists held close to their chests. Every few kicks they rotate a fraction, their legs jerking up.

poised
There it is, a suitcase by the door, a backpack beside it, both waiting for early morning.

rainstick
I imagine that the sound of wasted time, of hours pouring away with little to show for their passing, is that of a rainstick - a slippery, hollow sort of sound, mildly pleasant and lulling.

squirrels
It's an afternoon of squirrels. They rear up, vigilant and still, in patches of tall grass or clumps of broad green leaves. They drape themselves on the backs of benches or pick furiously at fast food and candy wrappers. One of them twitches in fright when a butterfly lands on its tail; it goes leaping across the grass, body bristling.

tectonic
Tectonic tensions underlie his life. On the one hand, he is rooted in and nourished by beliefs and practices that are centuries-old; on the other, he craves the latest thrills, wants to seek the newest trend-setting city or neighborhood and insinuate himself into its rhythm and life.
Posted by HKatz at 5:12 PM

diminution
I no longer admire her. I acknowledge her achievements, I respect her work and intelligence, but in certain ways - through carelessness, unthinking conformity, and a disregard for conscientious inquiry - she has diminished herself. Probably not to most people who know her - she's the same to them; but to me she's different now, a knowledge I hold to myself quietly and tiredly.

fireflies
When I walk home in the dark, fireflies tap at my elbows.

schlepp
Tote bags, grocery bags, a cart, multiple trips to the grocery store, then to the community house where I'm throwing this meal (I don't know how many people will show up, only that it will be more than the number who said they're coming) - and it feels good later on to just sit and watch everyone chatting and eating; getting a few quiet 'thank you's and some help cleaning up doesn't hurt either.

transported
My feet insist on walking. Across one river, beside another, down streets with cobblestones and giant flower pots, bright window shutters, fan-shaped windows, fountains, flower baskets hanging over painted doors, memorials, wreaths, sun and shadow, horses clopping, beds of crisp green grass. Different neighborhoods disclose secrets to me, down side streets that are still and golden.

untangle
There's a point where I can't stay at my desk anymore; the doubt has pressed in deep, and my thoughts have tangled up in absurdities. I head out, go to a quieter place where the traffic noise is muffled and the smell of grass and clover is intense. A few minutes after I leave, one of the problems resolves and the tension in me eases.

whirl
The fun of washing dishes past midnight, when I'm sleepy and a little swimmy with drink. The water whooshes into and over the pots, plashing and singing, racing in a bright stream.
Posted by HKatz at 11:03 PM