classic
They laugh at the old-fashioned special effects, but are clearly into the story, these kids raised on CGI.

giggly
She practices her song and dance routine with a self-conscious grin, her voice sometimes falling to a whisper as she tries not to laugh.

insensate
One of the useless comments people have made to her, on hearing about her mental illness, is "Just get over it. It's all in your head." Their ignorance is all in their head too.

moviegoer
Most of the time, she lies on the couch with her head on her arms. But as soon as Toto appears, she tenses and starts barking. She rushes to the TV and presses her nose against the other dog, as he runs away from the Cowardly Lion.

obsessive
As he picks his way across the cracked asphalt, he keeps his head submerged in a newspaper. Even when crossing the street.

sylvan
The art in the lobby features women draped in silk and crowned with poppies, leaves, and sunflower petals.

underminer
Instead of trying to refute her arguments, he questions her right to argue. Now she has to use up energy defending herself on a more basic level.


"Now you go play, and when you think you know what happened to that man, the one that flew straight down, you come and tell us, okay?"

In "Broken Glass," a huge backyard, some of it laid out in neat gardens, other parts of it wilder, reflects the characters' social terrain. A young girl named Angela lives in a walled-off wealthy neighborhood in Manila. On a visit to her aunt's home, she hears her mom and aunts discussing an attempted break-in the night before. A security guard apparently shot the intruder as he was scaling a perimeter wall, but it isn't clear where the body is.

Angela goes out to play on her aunt's property. Along with clear paths she can easily follow, there are also sections - especially farther from the house - that remain overgrown and untended. She encounters different domestic employees who, like the gardens, give her safe assurances mixed with hints of danger. They're obliged to treat Angela well, but they also refer to dark things that Angela is too young and sheltered to understand. By the end of the story, she's a little less sheltered, and her safety feels more precarious. I like how the author shows the subtle destabilizing shift in the girl's life.

Title: The Flower Garden
Author: David Guterson
Where I Read It: The Garden of Reading
A teenaged boy is torn between two dreams: continuing to be with a girl he loves, and playing baseball. He feels the intense promise of both. He helps the girl with her garden, and when he's with her there, he believes their love will last forever. But then he heads to baseball practice, and the girl feels less real to him than the dream of trying out for a professional team.

The story starts in a golden haze of summer, when he's 17-years-old and eyed with wistfulness and nostalgia by the old people in his neighborhood. He's a world apart from these older people, though by the story's end he's taken a significant step towards them, with his young dreams crumbling. At one point, in winter this time, he revisits the garden. The story seems to ask whether a relationship (or someone's dreams) can survive that killing blast of winter, whether there's enough faith in spring and renewal.

Title: The Garden of Time
Author: J.G. Ballard (James Graham Ballard)
Where I Read It: The Garden of Reading
A husband and wife live in an elegant estate with beautiful gardens. On the horizon, a horde of people approach. The husband slips into the garden and plucks a blossom off a special kind of flower. The horde falls back. Every time they get closer, he picks another blossom. Each blossom stops time, for a short while. The horde can't overrun the estate, tearing it apart, as long as there are enough of these special flowers in the garden. There's a sense that the aristocratic couple live in a magic bubble of time, and that the horde outside inhabits a different time altogether. Soon, the aristocrats will run out of flowers, their bubble will burst, and the life they've cultivated in it will end once and for all.

This husband and wife face each day with resolution, going about their lovely routines, even when they know their efforts are futile. The story's poignancy comes from the desire to see that beautiful bubble stretch out for longer. But they can't stop time and forever live as if threats to their way of life don't exist. The most they can enjoy is a temporary reprieve. No new flowers are growing in their garden. It isn't a fruitful place. As beautiful as it is, it may also be stagnant. There is no permanence compatible with mortal life, and any change, whether it's considered good or not, goes hand-in-hand with destruction of some kind. The husband and wife can see no way to either directly confront the horde or adapt to any of the changes coming. The state of permanence they achieve in the end is a frozenness without possibility of growth; they're still beyond reach from the horde, but their time is past. They can only exist as reminders for people who care to look closely.
Posted by HKatz at 12:51 PM

arcana
He's hunched in the shadows with a book spread open on his palm. It's only a textbook, but he looks like a conjurer.

belying
"I love my job," he says, with a dejected expression.

enliven
They've turned the broken corners of the porch into a garden. Missing boards are where flowers nestle now. Plants obscure the splintered railings. A rainbow windsock trails against the chipped paint.

flora
Beneath the stains of black mold, there's a pattern of flowers. On each colorful tile, a different flower: foxglove, pansy, rose.

ingestion
The blue-gray water and settling clouds swallow the sun.

objective
What do you want to be when you grow up? "A nice man," he says. "I'm going to be a very nice man."

willfully
One of her ways of trying to get me to change is to say, "No, you can't be like this." Maybe if she waves her hands in a complicated pattern, the spell will take effect.
Posted by HKatz at 4:31 PM

commencing
Mornings are delightful when I get a lot of things done. When I don't, the whole day seems to slow down. Futility and fear creep in with the lengthening shadows.

confronting
When he walks by, he hisses at us through his smile. I don't shrink away, but feel a rising strength, like I could strike back viciously if I needed to. I look over my shoulder to make sure he hasn't turned around and started following us. He's looking back over his shoulder too. Nothing happens. But we were purely animals, at that moment.

festively
The summer dresses on the rack look more like banners in blue, orange, and purple, meant to wave from the front windows of a house.

quake
The thunder sounds like it's emerging from the ground.

rosy
Asked what an ideal vacation would look like, I imagine lots of hiking, train rides, and English country cottages with gardens in bloom.

selfdom
I'd forgotten how funny these magazine quizzes can be, where stating your preference for a forest or a beach helps unlock the secrets of your personality.

trove
In what most people would use as a jewelry box, she keeps a collection of erasers. Some shaped like cupcakes, others like flowers and friendly robots. Also a few without any design, just the standard small pink block.
Posted by HKatz at 2:10 PM 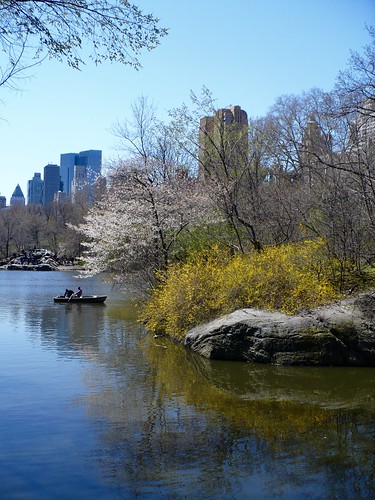 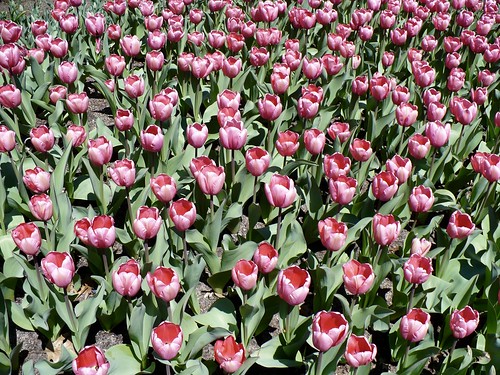 A duck in the Harlem Meer: 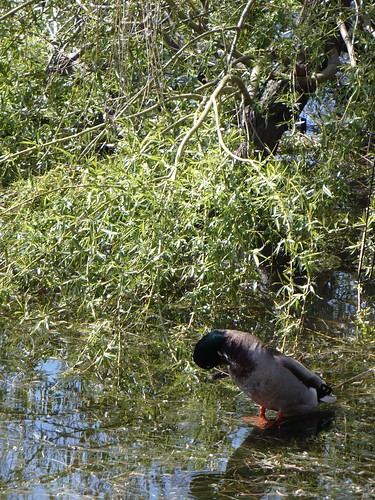 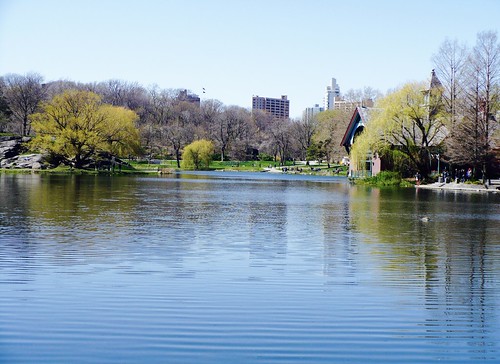 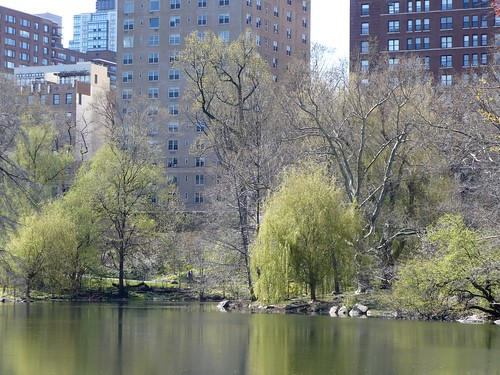 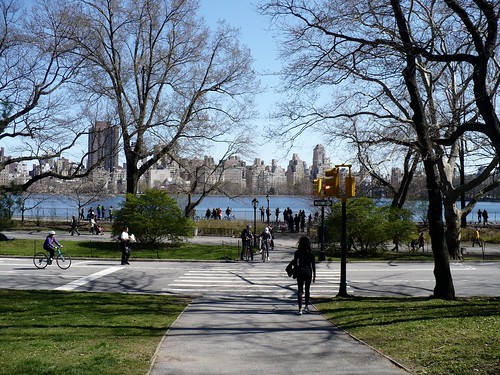 A tree that looks like a Dr. Seuss illustration: 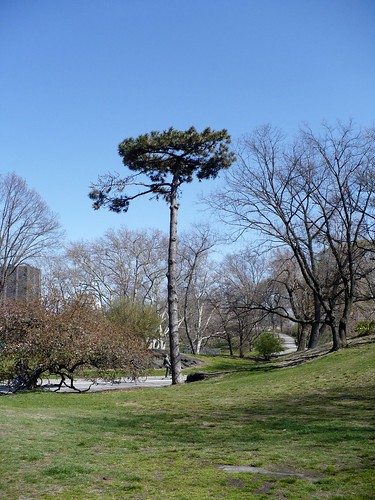 ariose
A lovely duet as the sun sets and candles flicker on the table.

clingy
As the waves withdraw, they clutch at the stones, wishing their foam were webbing that could hold them to the shore.

ecstatic
Moments that pass in a vibration of joy.

rework
He pretends it's an editing request, but what he really wants is a new article, from scratch.

serpentine
It's a tree like the head of Medusa, snake-like branches twisting and striking.

unjust
He likes to act as if he's a judge, and I'm the prisoner at the bar. He makes a statement that's exaggerated or untrue, then sits back with his arms folded over his chest and watches me exert myself to correct him. I catch on pretty quickly to what he's doing and end the conversation, which he takes as further proof that he's right. Such are his standards of proof.

wary
He's hunched over his book, but looks up from time to time to see if anyone is coming over to interrupt his reading.
Posted by HKatz at 1:35 PM