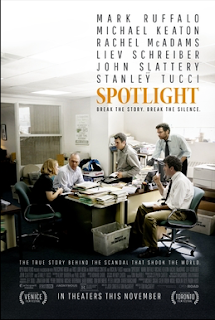 Spotlight is low-key and intense. Based on a true story, it shows the methodical, plodding, emotionally draining work put in by a team of investigative reporters from The Boston Globe, as they revealed a widespread coverup of child sexual abuse in their city's Catholic church hierarchy.

The movie stays respectful of its subject matter. There's no mindless grandstanding or sensationalism. It presents disturbing details in a straightforward way.

Though the movie focuses on one major religious organization, it highlights some general characteristics of abuse and institutional coverups:


The acting in Spotlight reminds me of Law & Order (back when I used to watch it) - the characters slip quietly into their roles, and the movie focuses mostly on their work, not their personal lives. I like how the movie doesn't try to glamorize investigative reporting. It shows the main characters poring over files and spreadsheets, looking up dozens of names in directories, and trying to find archived documents. But it sustains the dramatic tension throughout. Each little moment of discovery is exciting, and each setback is so frustrating. Though many perpetrators will never get arrested, the investigative work helps give the victims acknowledgement. It also tears away some of the widespread denial and excuses, hopefully reducing the number of future victims.