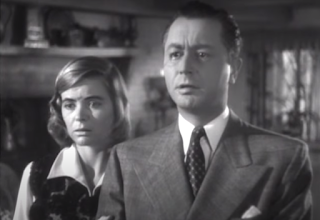 Oliver Bradford (Robert Young) is a WWII vet who suffered disfiguring injuries. Laura Pennington (Dorothy McGuire) works as a maid (and also has a strong talent for wood-carving art). Pretty much everyone dismisses her as plain. Oliver and Laura become friends and marry for companionship, but some time after their wedding they begin to perceive each other as beautiful, as if a transformation has come over their physical appearance.

There are a few things I like about this movie:

- Generally good acting, especially a touching performance from McGuire, showing Laura's kindness and profound sadness and loneliness, a burning desire to be loved combined with the torment of knowing that it's highly unlikely. Herbert Marshall also puts in a lovely appearance as a blind pianist (who lost his sight in the First World War), and Mildred Natwick is surprising as a housekeeper who could have been a creepy Mrs. Danvers type of figure, but instead is supportive of other people's love even though her own prospects for happiness were bitterly thwarted.

- The movie shows the perniciousness of pity – not just self-pity, but also treating another person as pitiable rather than helping them see what's good, blessed, and possible in their lives, and doing so in a way that isn't condescending.

- I also liked how the movie depicted the uneasiness around "ugly people." This uneasiness exists in the filmmakers themselves and in the audience. The two main characters are what can be called "Hollywood ugly." Oliver hardly looks like the Phantom of the Opera, and while Laura does look remarkably more plain in comparison to her physically transformed self, she still has a facial structure and figure for conventional beauty. In the romantic moments between the couple, we see them as they see each other – the loved one rendered physically beautiful. Would the audience have enjoyed watching them kiss passionately if they were both still shown in their plainer state? 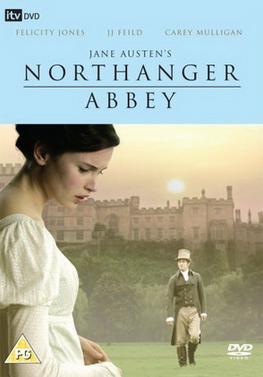 I watched a version of this movie in which a couple of short scenes were edited out. (I was talking to someone who mentioned how they liked the apple-picking scene, and I thought, "Apple-picking?")

Anyway, the film is an adaptation of a Jane Austen novel that I haven't yet read. Catherine Morland (Felicity Jones) is a sweet, naive, and sheltered teenager from a large, loving family that doesn't have a great deal of money. She tends to assume good will in others; sometimes she's right, as in the case of Eleanor and Henry Tilney (siblings played by Catherine Walker and JJ Feild).

Her habit of binging on novels with murder and other dark deeds has stirred her imagination in ways that could get her into trouble, and it does lead to a humiliating confrontation at one point. However, her perceptions can be generally accurate, even if she doesn't fully understand what's going on. For example, she isn't wrong in perceiving a darkness in Eleanor and Henry's father. But because she grew up in a happy home with loving parents, she doesn't understand the more subtle cruelties that ruin lives and relationships. So, inspired by the Gothic novels she reads, she comes up with a dramatic explanation for what the Tilney patriarch has done. As Henry points out to her towards the end, his father may not have committed actual murder, but he did commit a kind of murder nonetheless.

There's a lot that's sweet and funny in this movie, although some of the harshness of life – such as damaging relationships, betrayals, and poor social prospects – comes through as well. The actors pretty much all give strong performances, and along with the romance, I enjoyed the contrast between two different kinds of friendships in Catherine's life: the one she develops with Isabella Thorpe (Carey Mulligan) and her relationship with Eleanor. 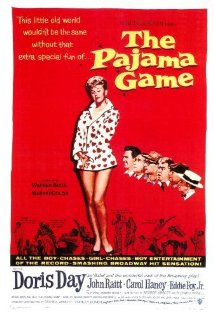 This is probably the sweetest movie you'll ever see about a labor dispute. It's also goofy and weird. Basically it ends with a bunch of adults dancing around in pajamas (the movie is set in a pajama factory where the union is demanding a raise). Some highlights: Carol Haney performing Bob Fosse choreography, a wild picnic shindig, an obese woman who gets some loving and no cruel taunts, and some heartfelt moments sold convincingly by Doris Day and the male lead played by John Raitt. 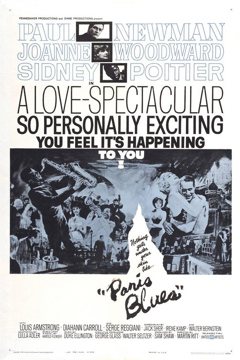 Overall, this is a weak movie, but it has some strong flavors, specific scenes and moments that make it worth watching even if I didn't entirely like it. I enjoyed the view of Paris rooftops in black and white, and the interiors of different clubs and apartments. Louis Armstrong, the amazing trumpeter with the unforgettable raspy voice, also makes an appearance, and that was definitely the high point of the film.

Of all the performances, Woodward's is strongest. Paul Newman's character is off-putting, and I didn't care enough about his music career struggles or dreams of becoming a serious composer. Poitier and Carroll work well together, but Carroll isn't given much of a character to play; her character, Connie, exists to share a certain point of view. Basically, Eddie wants to stay in Paris where he faces less discrimination for being black, but Connie tries to convince him to return to the U.S. and fight against bigotry there. The same conflicting viewpoints could have been explored with better dialogue and deeper characterizations.

So there were missed opportunities with this movie. But still, there's enough in it, enough chemistry between the actors, enough that's beautiful to look at, and that bonus treat of Louis Armstrong.