Our Little Sister is a movie that brings more beauty into the world, not just entertainment. It doesn't show unnecessary drama. Any tension arises from the characters' circumstances; the writers didn't shoehorn arguments into the plot. Much of the movie is grounded in what makes life beautiful, like sharing food and conversation with loved ones. I also like how the movie explores forgiveness and trust. 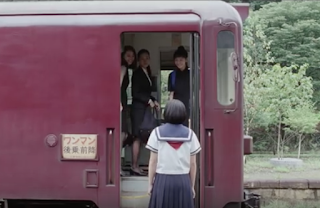 Three adult sisters who live together learn that their estranged father has passed away. He had abandoned his family for a love affair with a woman who became his second wife. His first wife, the sisters' mother, also wound up abandoning them at some point after. The eldest sister, Sachi (Haruka Ayase), stepped into the role of mother for her younger sisters.

When they attend his funeral, they meet their teenaged half-sister, Suzu (Suzu Hirose), for the first time. Their reaction to her is curiosity and kindness, and they invite her to live with them.


About forgiveness - there are situations where quick forgiveness feels natural, in the sense that you can move on from whatever happened without much trouble. Someone makes a mistake and apologizes. They don't keep repeating that same hurtful action over and over without making any effort to stop. Forgiveness in those circumstances is easier. But what about situations that involve lasting damage or repeated abuse? What does forgiveness look like then? In the US, there's a dominant narrative pressuring people to forgive quickly and tidily, no matter what, but I'm not talking about that. (Pressuring people to express forgiveness - and telling them they aren't good if they don't feel forgiving - encourages dishonesty and is often damaging.) I'm interested in the genuine feeling or frame of mind.

I like how the movie doesn't force characters into quick forgiveness. In situations of lasting damage, forgiveness is more a matter of living with anger and grief, but not being consumed by those emotions. It's not that the anger has magically disappeared. It's just less now, or maybe less important, and you can experience more joy and gratitude. For instance, Sachi, the eldest sister, feels great anger towards both her parents. Her mother is still alive, and their relationship is fraught. Their reconciliation in the movie isn't a sentimental scene, where they're suddenly hugging and crying on each other's shoulders. It's more like a new kind of peace, where especially for the sake of the younger sisters they can get along. They may never become close, but maybe they can enjoy some moments together that aren't brittle with bitterness. The choice to reconcile, even if it's a complicated reconciliation, comes largely from Sachi herself; she's ready for it. She doesn't want to hold on to an incredible amount of anger, even though anger remains.

Another facet of life the movie handles well is trust and opening up to people. When Suzu moves in with her older half-sisters, they all get along well, but she doesn't immediately open up to them. And the reason she eventually comes to trust them enough with her feelings is because they're loving and honest with her. They share their life (the plum wine, the whitebait, the backyard sparklers), and they're present in her life without making demands on her to provide answers or confess secrets. You can't really get people to open up by bullying, cajoling, nagging, or guilting them. It happens most naturally where there's patience and genuine kindness.