Two Movies to Watch With Your Kids

More people are staying home these days, and some family-friendly entertainment may be what you're looking for. (Or maybe these movies will drive you nuts, and you'll let your kids watch them if they want while you hole up in another room to get some work done.)

You would think by reading some of the reviews for this film that it's a horror show, that it will make you want to claw your eyes out and stuff your ears with cotton balls, but what I found was something different.

- The lead actress, Quvenzhané Wallis, approaches her role in a lovely way. She plays a quick-thinking sweetheart of a girl who powers through life with optimism and charm, and her performance doesn't feel forced.

- Jamie Foxx's performance is pretty funny and, at times, genuinely moving. He plays an out-of-touch billionaire running for NYC mayor who tries to boost his performance in the polls by throwing money at everything – sound familiar? – and he does it well.

- There are tongue-in-cheek moments and self-awareness in the film. Even though some scenes are played in earnest, other times the movie nods to its own ridiculousness and lets in some sly humor. There's a scene poking fun at Twilight types of movies, an acknowledgement of how little privacy people have in the age of smart technologies and social media, a look at the corrupt strategies a political campaign will resort to, and some fun with the conventions of a filmed musical (how can someone succeed at being mayor if they're dancing and singing so much?). As an adult, you can watch this movie with kids and still find enough humor in it yourself. It doesn't take itself so seriously, though it does touch on some serious issues (like, it's all well and good to sing about how everyone has a shot at success, but what do you do about poor education or parental neglect?).

- The movie is sentimental, but I didn't find it so cloying – first off because of its self-awareness, and secondly, because I accepted the rules of this fictional universe, where a poor kid will get adopted by a billionaire whose basic decency has been buried under money and workaholic habits. The performances from the main actors and supporting cast work pretty well too, balancing earnestness with an awareness that this is a fun bit of entertainment. (Among the supporting actors, Rose Byrne plays an especially sweet character.)

- Are the musical numbers powerful? I don't think they're breathtaking, but they're still engaging, and the actors hit some of the right acting notes during each (even if the singing isn't mind-blowing).

- I enjoyed some of the footage from around NYC (shout out to the 125th street stop of the 1 train!)

I think some of the people who gave it awful reviews loved the 1980s Annie, which I might have watched as a kid but don't remember. If you're a fan of that one, you may approach this one with mistrust and distaste, and you maybe won't allow yourself to enjoy any of it. I can't help that. All I can do is recommend 2014 Annie for people in search of a reliably entertaining family-friendly musical. 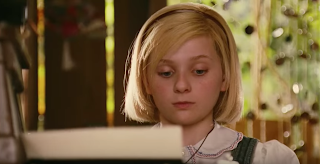 A movie based on an American Girl doll? Yes, and it's entertaining, with enough to enjoy even if you're an adult. Set in Cincinnati during the Great Depression, the movie features Kit (Abigail Breslin), who dreams of becoming a reporter. When her dad loses his job and heads to Chicago to find work, her mom turns their home into a boarding house and takes in lodgers for money.

Kit winds up experiencing some of the struggles of the Depression, writes about what she sees, and identifies the real criminals behind a series of thefts while preventing someone innocent from being arrested. Along with its clever and cute scenes, the movie shows some of the harsh realities of poverty as well as efforts people made to get by and help each other.

The villains wind up being a bit Scooby Doo-ish in their final act, where they're thwarted by those meddling kids. And there's a schmaltz overload at the end. But it's still a decent movie with good work from the child actors and an array of well-cast actors among the adults. The standouts are Julia Ormond, who gives an affecting performance as Kit's mom, and Wallace Shawn, who plays a cantankerous newspaper editor. Also, Colin Mochrie from Whose Line Is It Anyway has a small role as a hobo.

Additional suggestions:
Check out the movies I've been recommending on this blog, including other family-friendly ones like Mary Poppins, The Wizard of Oz, The Secret Garden, Anne of Green Gables, and Lilo & Stitch.