This two-episode TV mini-series adaptation of the Lucy Maud Montgomery book is enjoyable for multiple reasons, including the stunning Canadian landscapes. 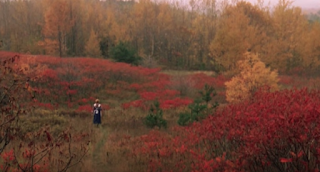 Shades of autumn, spring and summer greenery, the sparkling ocean - it's a feast of the four seasons, full of natural beauty.

The casting is good too. Both the roles of Anne Shirley and Diana Barry are played well (by Megan Follows and Schuyler Grant respectively). As for the adult characters, I love how Colleen Dewhurst and Richard Farnsworth play Marilla and Matthew Cuthbert, the aging sister and brother who initially wanted to take on an orphan boy to help them with their farm, but instead had Anne arrive at the local train station. I like how Marilla's hardness is tempered by a sense of justice and a wellspring of kindness, buried deep, that Anne eventually brings out. And how Matthew is pretty soft on Anne right from the start.

One thing I found both amusing and disturbing is how Anne often expresses emotions in a lofty, stage-like fashion, almost as if she is detached from them or afraid to discuss them more bluntly. It makes sense for a character who has dealt with loneliness and neglect by play-acting and disappearing mentally from a harsh environment to more beautiful imaginary worlds.

Overall, it's an excellent mini-series: lovely, engaging, spirited, and fun to become absorbed in for a while.

One of the most beautiful parts of the movie is a time-lapse sequence showing the arrival of spring, with flowers opening, plants pushing slowly out of the soil, and the land becoming green. The images have a rich, visceral quality that I love.

This adaptation of the Frances Hodgson Burnett book is full of such beauty. It's also a movie infused with hopefulness, where the dark neglected places in the land and in people still have potential for life, with enough nurturing.

I didn't find the adult characters compelling, and the movie is too rushed towards the end, but it's still delightful. The younger actors are excellent. Kate Maberly carries the movie as Mary Lennox. The child of wealthy but neglectful colonials in India, she becomes an orphan living in her reclusive uncle's estate in the Yorkshire moors and finds in herself a great capacity for self-sufficiency and love. 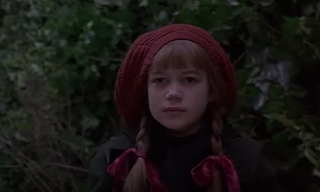 Dickon, the boy of the moors who can communicate with animals, is played well by Andrew Knott, and I enjoyed the peevish, wounded theatrics (and genuine pain) conveyed by Heydon Prowse as Colin. Also, Laura Crossley plays Martha, a housemaid and Dickon's sister, with a wonderful honesty and sweetness.

So much in this movie hinges on the sense of place. The large house with the echoing cries, drafty corridors, and abandoned rooms inspires fear and curiosity. And the garden has a character of its own, full of fairy-like enchantment and possibility.