Three movies about people with precarious lives in the US

At the start of the movie, a man has committed suicide off-screen. The people he leaves behind include his identical twin, Lawrence (Michael J. Smith Sr.). The movie takes its time revealing who everyone is. The suicide disturbs their already difficult lives and stirs up emotions that could overwhelm them. In the course of the movie, they redefine their lives in some ways and draw together to keep from succumbing to despair and poverty. Sometimes, they seem like the only three people in their world (if one died, only the other two would notice - though at one point there's also a kind neighbor, played by Johnny McPhail, whose intervention saves a life).

The two others are Marlee (Tarra Riggs) and her teenaged son, James (JimMyron Ross). James is a misdirected kid. The adults in his life have serious hardships of their own, so that in spite of good intentions they don't always offer him the guidance he needs, though they try. The school he goes to seems to give him only opportunities to be preyed on. His life is closed-off and lonely, though the filmmakers thread some hope into it, in his changing relationship to a gun: a gun he first uses to express anger and a show of control, then uses as possible self-protection, until he does something with it to attempt to prevent further death.

Where the characters live, in the Mississippi Delta, the landscape is muddy and gray in the winter (sometimes it's startling, like when birds in a noisy mass burst into the sky). The characters cling to the lifelines they can find, including a gas station and convenience store that's been abandoned and might serve as their livelihood and a second chance of sorts. Maybe these characters would be worse off, more lonely and directionless, if they were apart from each other.

As the movie ended, I wondered what would happen to James. His mother wants to save him from violent kids, but can she protect him from the demons inside, the impulses of self-destruction? What's his place in the world, living with despondent, angry adults? There's a shot at the end of the movie of a man in the front passenger seat of a car, and for a second I thought it was James, but no - the movie has remained in the present. James is in the backseat. But this could be his future, traveling through the same ruts in a muddy landscape.

A lot of the tension in this movie comes from not knowing when the antics of the child characters will go from being funny and cute to harmful and messed up. They live in a cheap motel in Florida, not far from the Magic Kingdom, and they have the resilience of kids who are healthy, confident, and fairly happy, going off on their own on adventures that expose them to all kinds of risks but also give them some pretty good memories. At least at the start, they have enough innocence to protect them from what some of the adults in their lives are doing, and they can hold disturbing realizations at bay by wheedling ice cream money out of people or going on a "safari" (really some cows in a field, but lovely all the same). Even when they imitate the adults, cursing people out, they're play-acting.

Their local area has so many bright, colorful buildings in shades of orange, pink, and purple, making the whole world seem even more like a playground. Disney doesn't enter into the scene until very briefly at the end, when the main character, Moonee (Brooklynn Prince), is in most need of escapism.

There are an assortment of adult characters in the movie too. One of them, Moonee's mother, Halley (Bria Vinaite), isn't an adult except physically. She relates to her daughter the way an irresponsible, affectionate older sister would, but doesn't parent her. Then there's Bobby (Willem Dafoe), the manager of the motel. I liked him. He's a curmudgeonly, basically decent person trying to do his job well under difficult circumstances, and he's protective about the people living in the motel; there are limits to what he can do for them, but he finds ways to intervene on their behalf. Dafoe gives an understated performance, full of dignity, and as a skilled veteran actor he blends in well with the new ones. 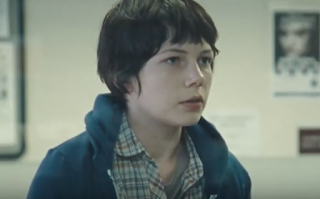 The movie opens with a young woman, Wendy (Michelle Williams), and her dog, Lucy, playing catch in the evening light. Lucy melts away somewhere into the grass, trees, and shadows. But Wendy is able to find her again, this time.

Wendy is living out of her car and carefully counting her money as she travels to Alaska with Lucy in the hopes of finding work there. Because the filmmakers show little of Wendy's life before her trip, and because she's self-contained, the movie depends on Michelle Williams giving the character weight and presence. Williams does this beautifully, and the filmmakers avoid both unnecessary drama and sentimentality when showing this chapter of her life.

The way the camera follows Wendy often gives the impression that she's being watched (maybe threateningly) or that the world is closing in on her. There are beautiful images that also say much about the state of her life. For instance, she's in a largely empty supermarket with an abundance of food. Her hand closes around gleaming fruit. She carefully weighs what she might be able to get away with taking.

At a shopping plaza, a security guard (played by Wally Dalton) whose job demands little of him takes a kindly interest in her. They have a conversation at one point about unemployment - how the mill closed in the town, leaving people without money or purpose (what do they do all day?). How it's extremely difficult to get a job without having an existing address, or an address without having a job.

Mostly, Wendy keeps tight control over her emotions. There's one point though when she's pushed to extreme fear and sobs violently in a gas station bathroom. By the end of the movie, Lucy will have a more stable life, while it's left unclear what will happen to Wendy. She's homeless, passing through, and slips away unnoticed.