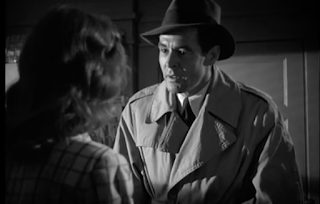 At first, Act of Violence seems like a straightforward crime thriller set in post-war suburbia. Joe Parkson (Robert Ryan) is a stalker menacing a peaceful home. He carries a gun and looks like he could use it without flinching. But Joe isn't a criminal, though he may become a murderer by the movie's end.

The man he is after is Frank Enley (Van Heflin). They served together in the war and spent time in a German POW camp. Frank now has a wife, Edith (Janet Leigh), and a baby son. He's well-respected in his community; people consider him a war hero. To Joe, Frank's cheerful, prosperous life is an injustice. Joe remembers what Frank did in the POW camp, and what his fellow POWs suffered for it. Joe is permanently injured and easily written off as crazy, but at least he survived and will now have his vengeance.

Act of Violence should be a better known movie for its strong acting, the tone of uneasiness throughout, and the difficult questions it raises. What would you do to stay alive? How do you manage to live with yourself, if you've either deliberately committed evil or made a terrible mistake? Are things you did under extraordinary circumstances reflective of your everyday character?

Joe and Frank wrestle with these questions post-war. As do the women in their lives - Edith, who learns disturbing information about her husband; Ann (Phyllis Thaxter), who as Joe's girlfriend tries to persuade him to abandon his revenge mission; and an aging prostitute, Pat (Mary Astor), who finds Frank when he's trying to hide from Joe. The movie doesn't make the mistake of turning Joe into a righteous hero and Frank into a full-fledged villain; Frank's reasons for acting as he did during the war are muddled, and Joe is so consumed by anger that he's becoming less of a person and more of a destructive force that will burn itself out. 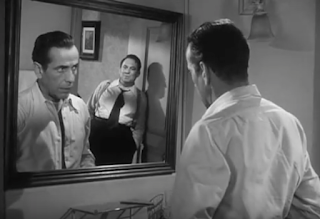 WWII veteran Frank McCloud (Humphrey Bogart) visits a Key Largo hotel run by the father, James Temple (Lionel Barrymore), and the widow, Nora (Lauren Bacall), of a fellow soldier who died in Italy. It's hurricane season and extremely humid (leading to a memorable scene where the movie's main villain wallows in a bathtub). The only guests at the hotel are several suspicious people who turn out to be gangsters. Edward G. Robinson plays their leader, Johnny Rocco, who in addition to his hired thugs has brought along his girlfriend, Gaye Dawn (Claire Trevor). She's addicted to alcohol, her escape from a life of getting used and mistreated.

In helping the Temples deal with the gangsters, part of what Frank needs to fight against is his own weariness and disillusionment. He's recently come back from a war against a large-scale evil, only to be confronted with evil on a smaller scale - more petty, but still profoundly damaging and unfortunately commonplace. A part of him wonders if it's worth it to keep fighting when these evils keep cropping up.

There are memorable performances, like Robinson's portrayal of a man who enjoys humiliating people and is willing to sacrifice innocent bystanders (in this movie, they include a group of people from the Seminole Nation who are friendly with the Temples and accustomed to relying on the hotel as shelter during hurricanes). Claire Trevor also does a wonderful job playing a woman who leads a pitiful, scraping sort of life but still finds a bit of dignity in herself by the end. I also like this Bogart and Bacall on-screen pairing better than in other movies where they appear together. They work comfortably, and their characters have an easygoing rapport on a path to a low-key romance.