The Age of Innocence: Newland Archer as an Opera Singer

Both at the beginning and towards the end of The Age of Innocence, the same aria from the same opera gets performed for the same group of people, the upper crust of New York City in the 1870s. The same soprano, Christine Nilsson, sings it both times. No doubt her voice is beautiful, but because the novel highlights the words of the aria in little outbursts, the effect is a plaintive bleat ("M'ama!").

The fine music and the aria's tribute to love plays in the background. What's in the foreground are the social rituals of the upper class, who examine each other with their opera glasses. One of the mistakes Newland Archer makes is assuming that love and fine art reign central and supreme, while less worthy social machinations can unfold in the background.

Newland is a young man from an old family. Even if he isn't outrageously wealthy, he embodies class and respectability. His mother and sister dote on him, and his life is leisurely. His position at a law firm exists mostly for form's sake. Cultured and at ease with himself, he has every reason to believe he's in command of his world. 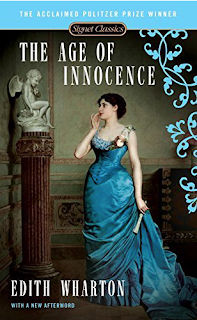 At the start of the book he becomes engaged to May Welland, in all outward appearances an excellent match. But soon after, he falls in love with her cousin, Ellen Olenska, who has fled to New York from her husband. In the drama that plays out, Newland hangs on for much of the time to the belief that he's master of himself, and that fine thoughts and passionate feelings, truth and beauty, are central in his life. He's pulled between personal inclinations and powerful social demands, but even as he struggles, he believes that it's his choice that matters. His and Ellen's.


In reality, he's on the opera stage. His words are beautiful, and he's enveloped in grand music. But he has no control over when the music will end. The audience for the most part keep an eye on him, but though he catches their attention, he has little power over them and over his own fate. He can believe with all his heart in the words of love, but what he believes makes no difference when the curtain closes. The audience will chatter amongst themselves, making their own plans, and keep him on the stage where he can sing his little heart out and where his wild thoughts can stay contained in music and art, not unleashed in day-to-day life where they'll cause a disturbance.

For much of the book, Newland sings his lines and doesn't realize how little they matter to the practical course of his life. His fiancee and her family act on their own ideas. So does his family and everyone else among his social circle. One of the relationships I would have liked to see more of is the one between May and Ellen, cousins and rivals and perhaps good friends too; it's hard to tell, as their key interactions occur when Newland isn't present. Much that's important takes place when Newland isn't around. He thinks his position on the stage is more significant than it is, and he catches on too late.

In a different novel, Newland might have overthrown social norms, but Edith Wharton makes him an innocent - as in, naive and ignorant - man of the world. He can mingle with bohemians, dabble in the law, and study what he thinks is the best literature, art, and music. He'll cast a sardonic eye on the follies of NYC's upper class and consider himself his wife's guide to how the world works. And all the while, he'll miss the bigger picture and his true position in it.

Granted, his dreams are beautiful. But the beauty of his intimacy with Olenska depends on them remaining separate. At one point, she asks if he's suggesting that she live with him as his mistress, and he says, "I want - I want somehow to get away with you into a world where words like that - categories like that - won't exist. Where we shall be simply two human beings who love each other, who are the whole of life to each other, and nothing else on earth will matter."

To which she says, "Oh, my dear - where is that country? Have you ever been there?"

For their love to remain beautiful, it must remain a work of the imagination.

The scenes at the opera resonate throughout the book in other ways too. I could easily see May Welland in the role of the soprano singing "M'ama... non m'ama" throughout her engagement to Newland and in the early years of their marriage. To Newland, she remains something of a mystery, a figure he can admire more from a distance than in close quarters. She has her own role to play. Her heart has its own song. To Newland, it sounds tinny. (Ellen Olenska, on the other hand, might perceive other qualities in her cousin's music.)

The Age of Innocence is one of the books I chose for the Classics Club Challenge.