On Labor Day, I went on a roughly 20-mile hike that started in East Harlem and ended in the Bronx by the Whitestone Bridge. The hike almost didn't happen, because Hurricane Hermine menaced the city from afar for a while, but the weather turned out beautiful - sunny all day, no violent winds or flooding.

The hike was organized by Shorewalkers, a group I've walked with before, in and around NYC.

So here's the starting point, near the 6-train stop at 125th Street and Lexington Avenue. 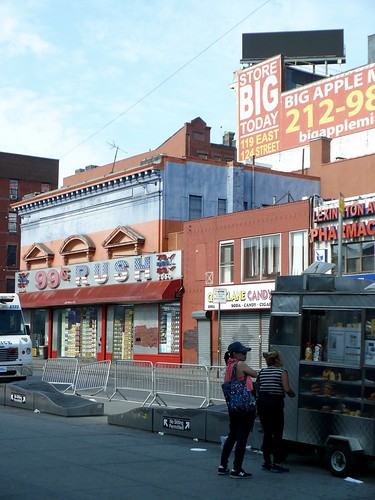 We headed east and crossed the Triborough Bridge to Randall's Island, where part of our walk took us under the Hell Gate Bridge and Railroad Viaduct. 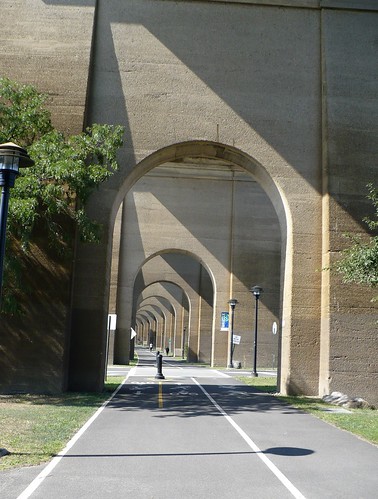 We were near some athletic fields, and the air off the water smelled clean and fresh, even though there's a waste treatment plant nearby (the winds were blowing favorably).

Randall's Island is located between Manhattan and Queens, with the Bronx to the north. Rikers Island, with its massive prison complex, is also in view, along with the smaller North and South Brother Islands.

North Brother Island was where officials twice confined Mary Mallon, nicknamed "Typhoid Mary." It's also where the steamboat, General Slocum, ultimately came to rest after catching fire, in a hideous maritime disaster that killed over 1,000 people.

As for that rail viaduct we walked under earlier, with the beautiful concrete arches? The original plan had been to use exposed steel for the bridge's piers (or supports), but there were concerns that mental asylum inmates on Randall's and Wards Islands would easily climb on those to escape. Reinforced concrete was the solution.

All of these darker bits of history we absorbed on a calm, sunny day with beautiful views of the East River. 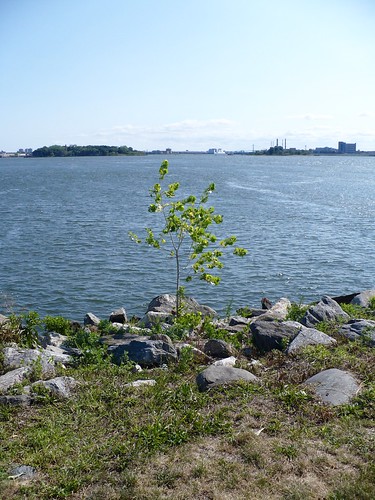 Over the Randall's Island Connector, a foot and bike path, we crossed to the Bronx's Port Morris neighborhood. This segment of the walk took us through a largely industrial area with warehouses and distribution centers; part of the time we also followed the Bruckner Expressway.

Some of the homes on the residential streets stood out to me. 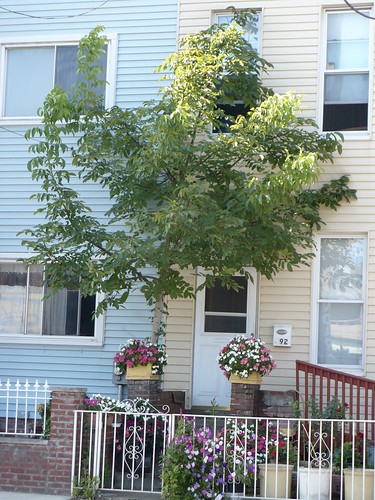 As much as possible, we tried to stick to the shore, and it would be the first of many times we'd get amazing views of the Manhattan skyline, the East River, and Queens. 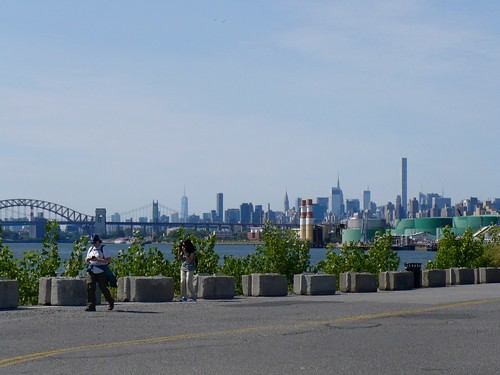 The rest of the walk followed the contours of the Bronx's south shore, all the way to the Whitestone Bridge. The shore is broken up by rivers or creeks that flow into the East River. Taking this route brought us to a string of riverfront parks.

The first park we visited was Barretto Point Park in the Hunts Point neighborhood. It has a small amphitheater overlooking the water. We stopped to sit for a few minutes and look out at the East River. 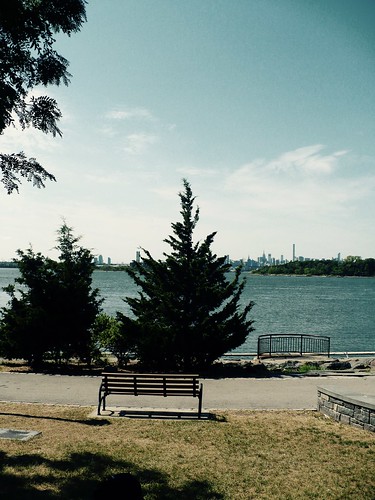 Another park, Hunts Point Landing, is a popular fishing spot that has undergone some restoration, so that it now has tidal pools. 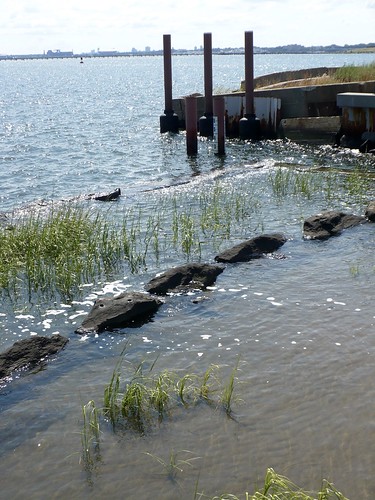 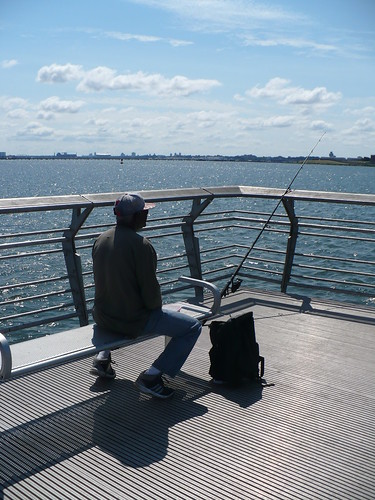 And here's the initial delicious shade of Hunts Point Riverside Park, set along the Bronx River (which feeds into the East River). 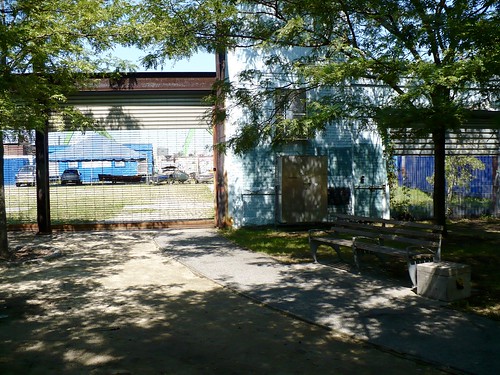 Going on foot between parks took us through largely industrial streets, sometimes made more beautiful by graffiti art. 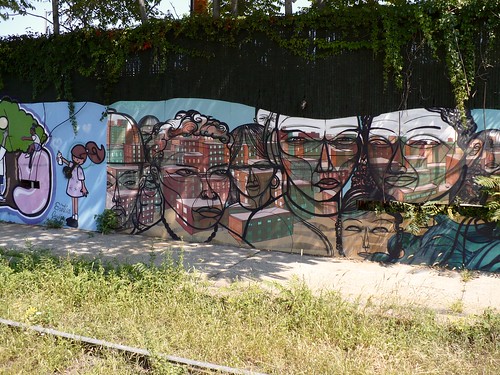 At Soundview Park, we stopped for lunch. 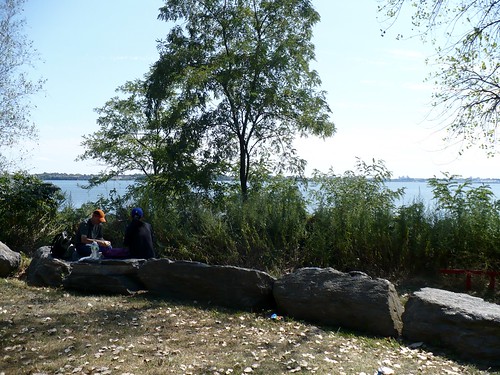 One of the things I loved about this walk was seeing how natural settings can integrate with cities. These parks are ongoing projects in preservation and maintenance. Soundview Park, for instance, underwent a restoration of its old salt marshes, which can filter out some pollutants that run into the water and can help reduce shore erosion.

After Soundview Park, we walked through a neighborhood vulnerable to flooding: Harding Park, in the Clason Point area of the Bronx. Harding Park, known also as Little Puerto Rico, has many lovely bungalows and looks like a neighborhood you'd see in warmer climates - maybe California, Florida or the Caribbean. 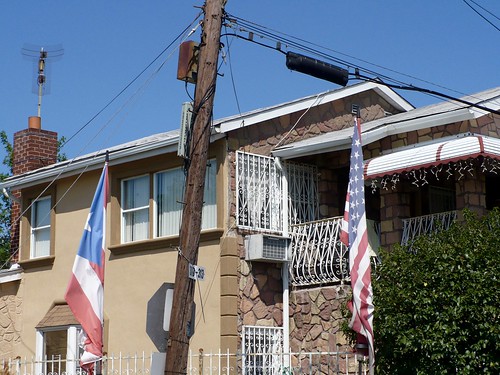 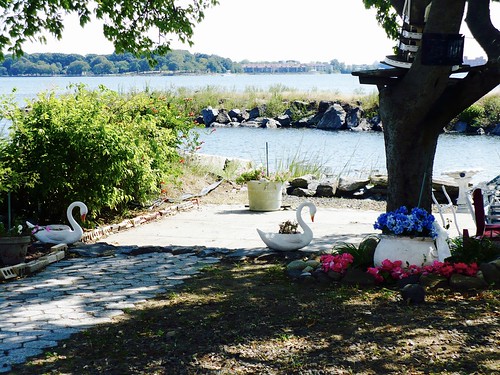 As we walked, we kept getting views of the Whitestone Bridge, our destination, which always seemed closer than it was. (On a direct route across the water, it would have been.) 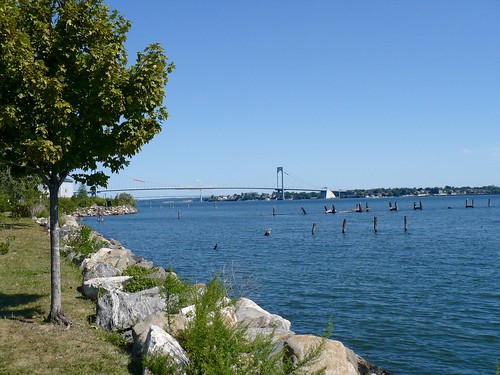 Sometimes it felt like we weren't in the city at all. This next photo is from the walk through Pugsley Creek Park and Castle Hill Park. 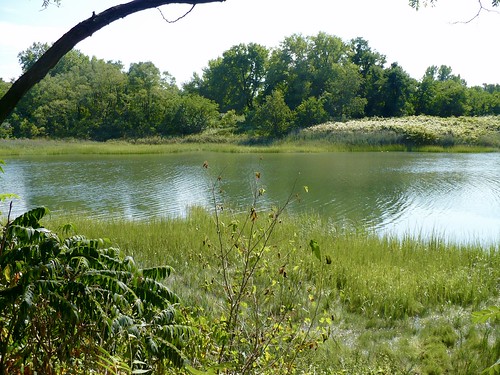 The Whitestone Bridge remains inaccessible to pedestrians, so we reached the bridge by heading to Ferry Point Park and getting close to the underside. By this point I was regretting my choice in socks, because they'd steadily chafed and given me large blisters on the pads of my feet. So it hurt to walk, but I'm glad I stuck it out. 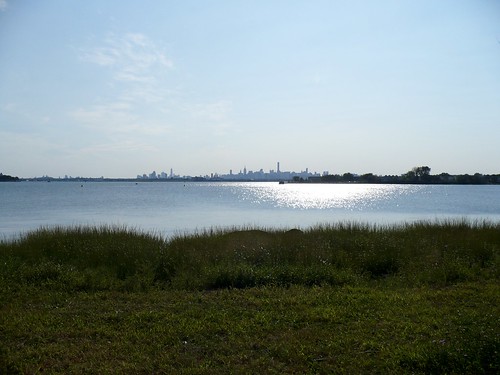 I like how full of surprises this hike was. For instance, at Ferry Point Park, we visited a 9/11 memorial, a grove planted with trees donated by the Prince of Monaco. 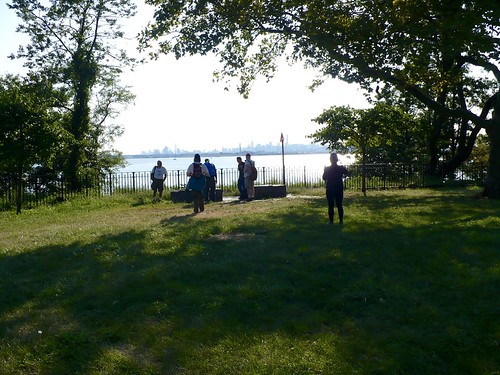 Seeing parts of the city that are out of the way and off of tourist maps was a real pleasure.