I did a 15-mile walk yesterday starting from 86th street on the Upper East Side of Manhattan, going north along the East River, crossing the Triborough Bridge to Randall's Island, walking around a bit there, then continuing on the Triborough Bridge to Astoria (a neighborhood in Queens), then walking south through Astoria, mostly along the East River, and heading back into Manhattan on the Queensboro Bridge. (The walk was organized by this group.)

Here's the Triborough Bridge from the Upper East Side waterfront: 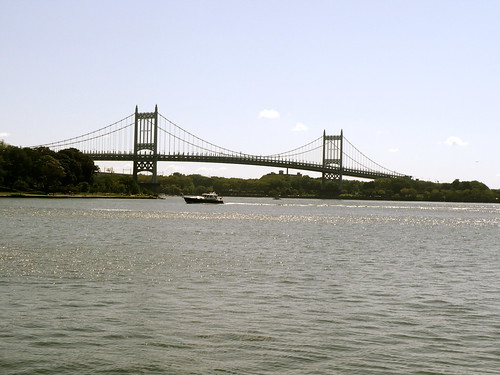 The bridge connects Manhattan with Randall's Island and then with Queens. 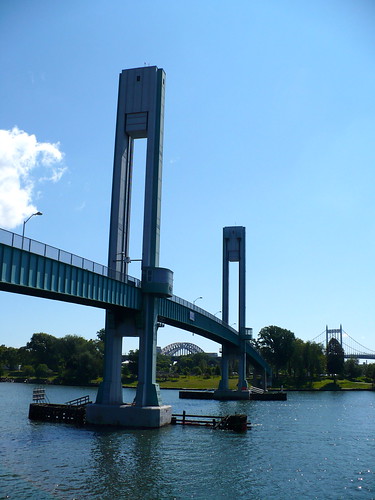 The part of Randall's Island we saw was mostly athletic fields, with some green spaces looking out over Manhattan. 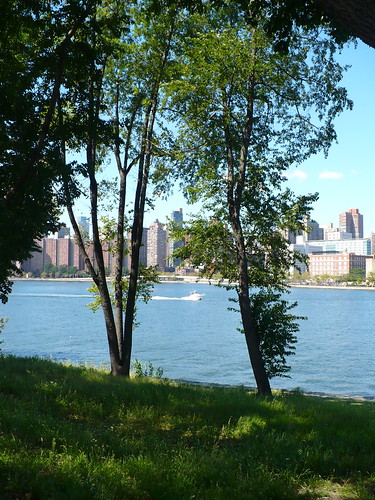 The best part of this walk was the bridge. Under it: 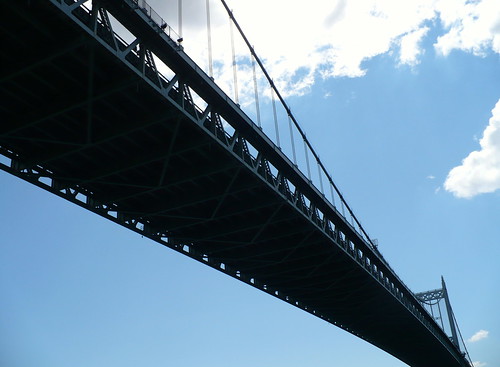 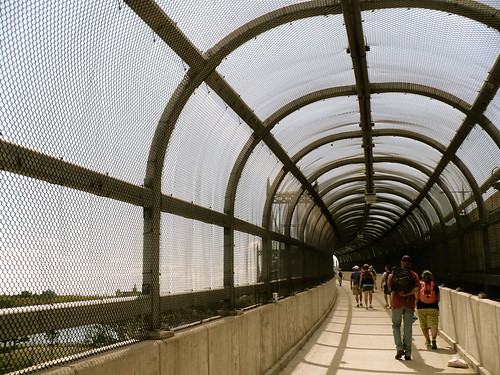 Looking over its edge: 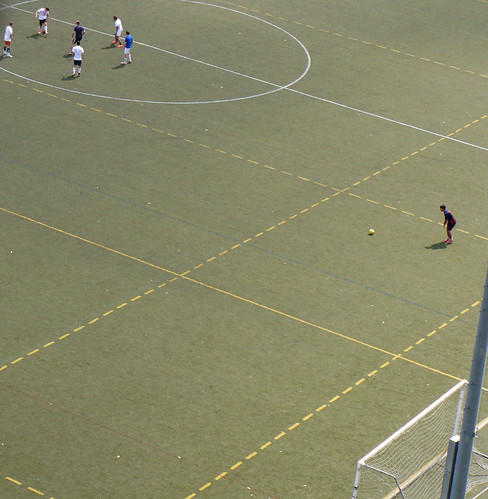 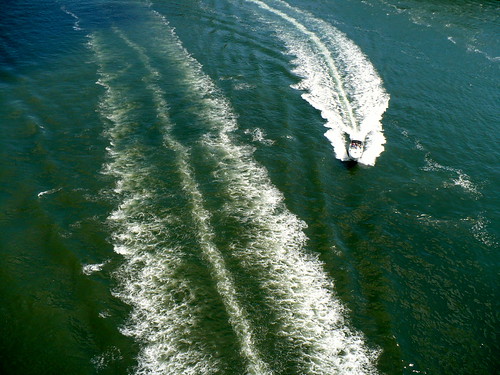 To the north is another bridge, with the fierce name of Hell Gate Bridge (Hell Gate is the English deformation of the Dutch "Hellegat," which according to a reference work cited on Wikipedia means "bright strait" or "clear opening" - referring here to the East River). This part of the river is supposed to be especially dangerous, with fierce currents, so maybe in that sense Hell Gate suits it. This Amtrak-owned bridge is for trains only, notably Amtrak's Northeast Regional and Acela. (When it isn't stalled on the tracks, the Acela is Amtrak's high-speed train - twice as expensive as the Northeast Regional, which means you'll be twice as frustrated when it doesn't arrive on time.) 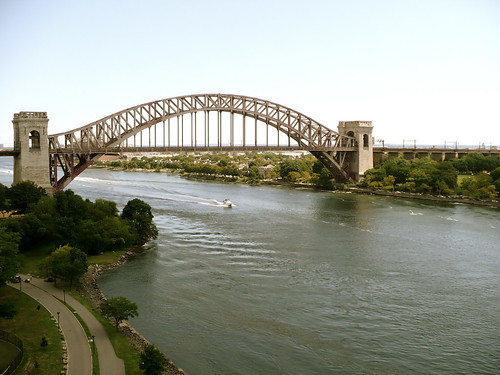 Besides bridges, what else did we see? Much of Astoria's waterfront walkways and parks, including Astoria Park: 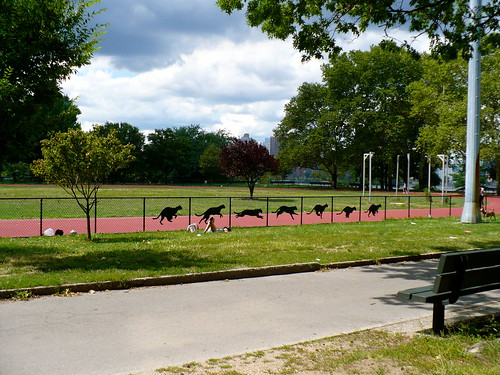 Another look at the Triborough Bridge from Astoria. 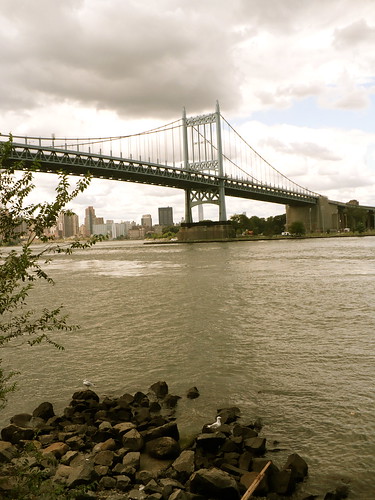 Already back to bridges - because they stand out magnificently, so I stopped and took photos of them. In between bridges, I was mostly talking to people in the group. An interesting bunch, as you'd expect from a group of people who meet up on a Sunday morning just to walk 15 miles in NYC.

This bright little balcony caught my eye too: 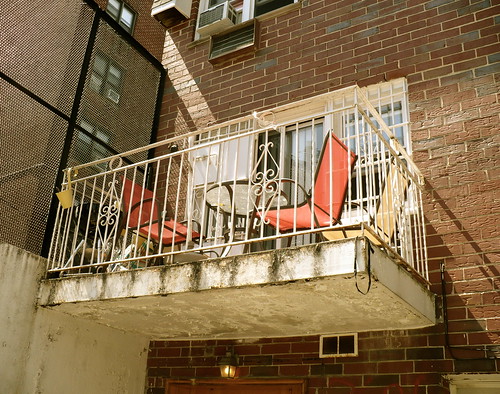 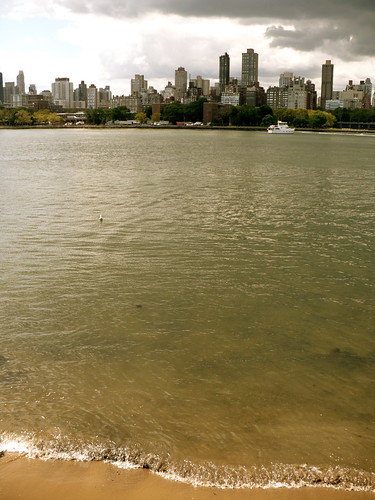 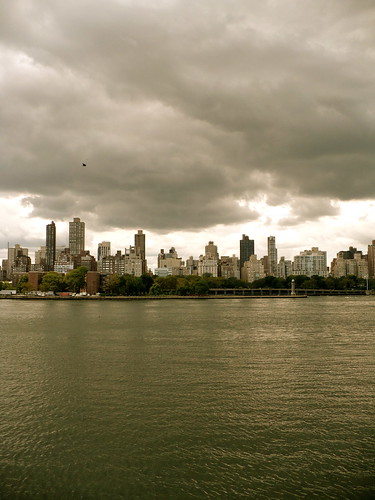 Some clouds threatened rain, but the rain held off. The clouds sometimes made a dramatic backdrop for the bridges. That's the Queensboro, which took us back to Manhattan along its foot & bike path: 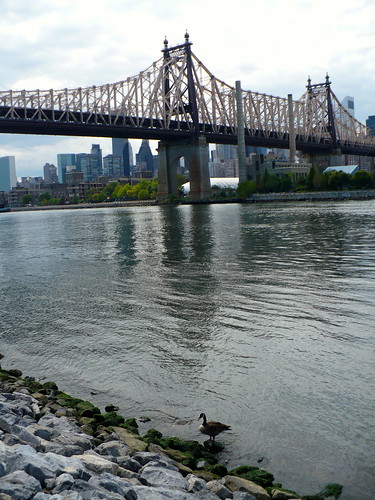 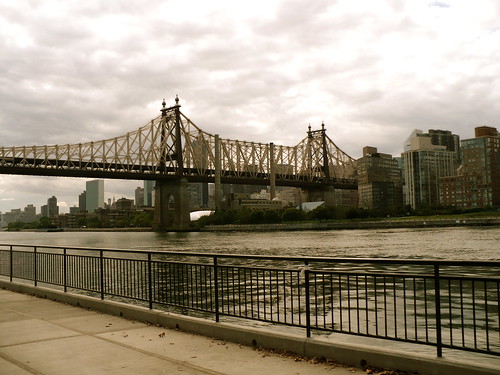 On the Queens side, you have to head some ways inland to get onto the footpath of a bridge; this added to our walking time. Also, some parts of the shore are cut off because of industrial buildings. But there were also some pleasant surprises, like a long tree-lined avenue that took the edge off the humidity when we walked to the Queensboro footpath entrance. 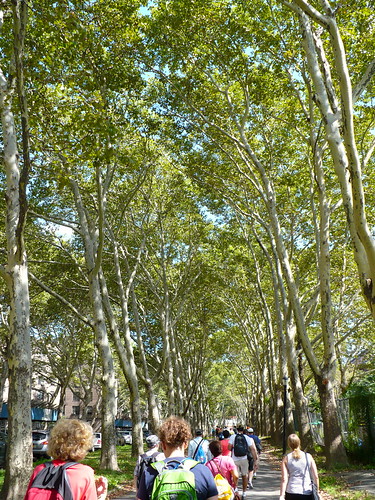 Once you're on the Queensboro - amazing bridge architecture up close: 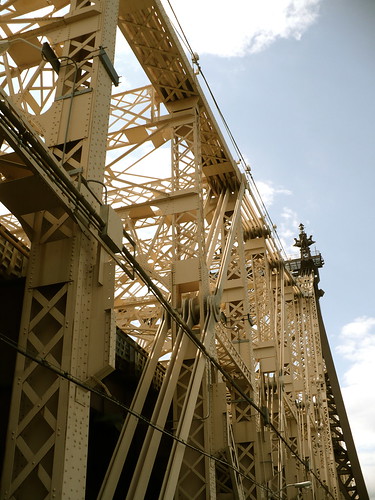 To the south, first the skyline of Queens, then Manhattan: 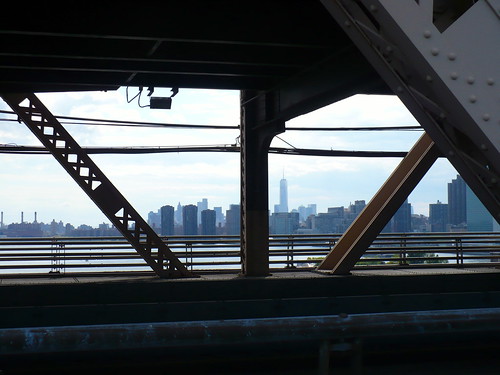 To the north, a fence to keep pedestrians and cyclists safer. You can still see through it; here, for instance, is an apartment building on Roosevelt Island, set in the middle of the East River and reachable by subway or tramway. 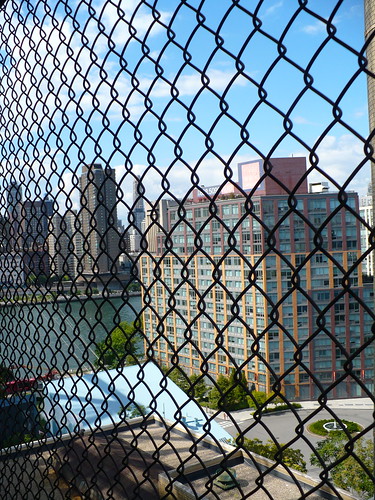 What waits for us at the end of the bridge, on the Manhattan side? Pigeon city. A load of pigeons that have staked out this filthy corner of the island for what looks like a pigeon command center, sheltered by the bridge. 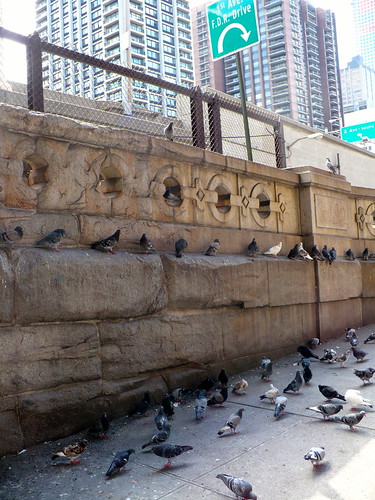 This walk gave me a feeling of exploring some of the skeletal arms of the city, and one of its arteries.