This past Sunday had ideal summer walking weather. For the most part, it wasn't too hot out; not too unrelentingly sunny. Lots of cool breezes. A great day to be outdoors. Granted, part of my trip to Brooklyn Heights was an indoor historical lecture/tour, a really good one, but after that I walked along the beautiful waterfront.

The visit began at the Clark Street subway stop in Brooklyn Heights. One of the first things I noticed is that a few of the streets have fruit names, apparently because lots of fruit used to be delivered to warehouses here. Here is Pineapple Street, with buildings of a suitable color. 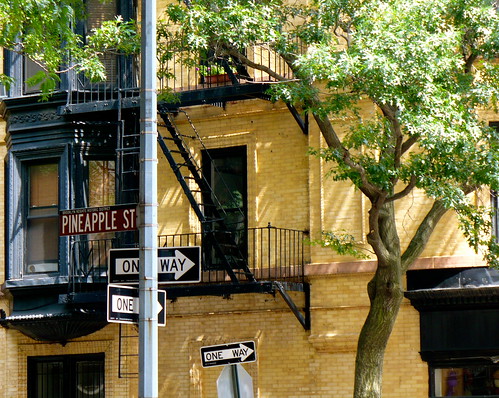 A little bit north of that, between Orange and Cranberry Streets, was where the history lesson began. This was at Plymouth Church, where the famous 19th century abolitionist preacher, Henry Ward Beecher, used to take to the pulpit to speak out against slavery. 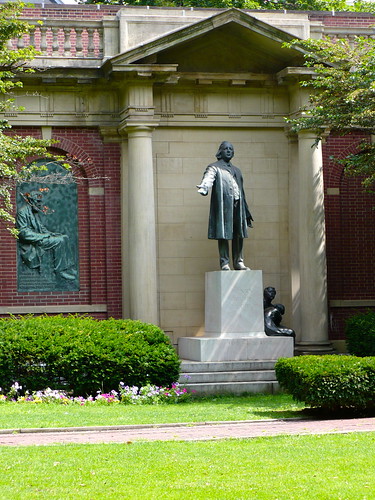 That's his statue, and to the left of him, an engraving of Lincoln, who prayed a couple of times at the church. In addition to serving as a platform for abolitionist preaching, the church was also a station on the Underground Railroad, the series of homes and other potential hiding spots that runaway slaves used to escape north.

Even in NY they weren't safe. Although slavery was abolished in NY state by 1827 and other northern states had also struck down slavery, southern slaveowners still had a claim to the escaped slaves. Northerners were obligated by law to hand them back over or risk getting fine or going to jail. There were also bounty hunters or slave catchers who actively pursued escaped slaves (and sometimes, if they didn't find who they were looking for, would capture a freeborn person who fit the description more or less). Runaway slaves generally tried to make it to Canada.


Sometimes, Beecher would also hold auctions raising money to free slaves. Among the most famous examples was a young girl whose white owner (who was also reportedly her father) had already sold off her mother and sisters and was looking around for a buyer for her; her grandmother, who was free, found out and asked the church to intervene. Known by the name of Pinky when she was a slave, the girl was named Rose Ward after her "freedom auction." This is a portrait of her shortly after she became free, wearing a ring from one of the women at the church. 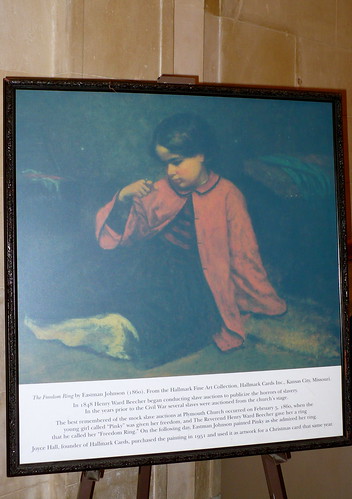 Several decades later, Rose Ward returned to the church for a visit and also returned the ring for the church to keep in honor of Beecher. 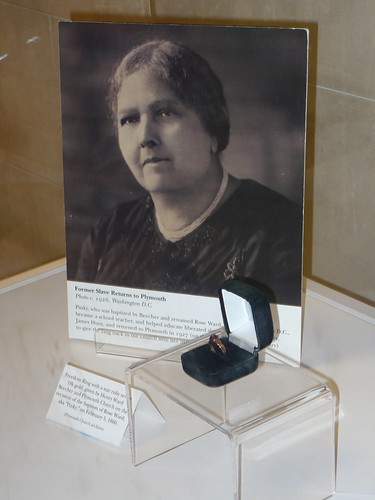 These kinds of events, in addition to the sermons and speeches, were meant to put a human face to slavery. Prior to slavery being abolished in NY, Brooklyn had a slave population that rivaled Charleston's; many of the slaves in Brooklyn had worked as artisans and in factories. It's easy to forget that, and think about slavery as only a southern institution in US history. 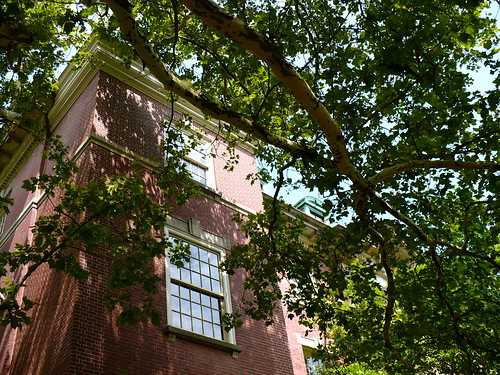 The church is worth a visit if you're in Brooklyn. The lady who gave us a lecture on its history is not only a history buff; she's a choir singer and was present when Martin Luther King Jr. came to speak at the church back in the early 1960s. She gave us a lively, impassioned historic talk. Another feature she pointed out were the many stained glass windows in the church that show not Biblical stories, but images from American history (I took a couple of photos that didn't turn out well unfortunately). It's unusual to see stained glass windows in a church depicting secular historic and political content.

After the visit to Plymouth Church, where did we go? (This was a group walk, by the way, headed by a guy who if I remember right is a Brooklyn native.) The waterfront came next.

Gorgeous views of the Manhattan skyline. 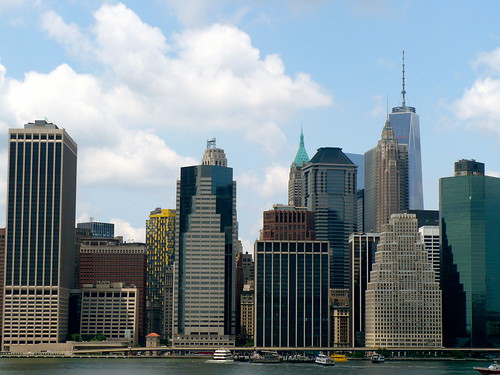 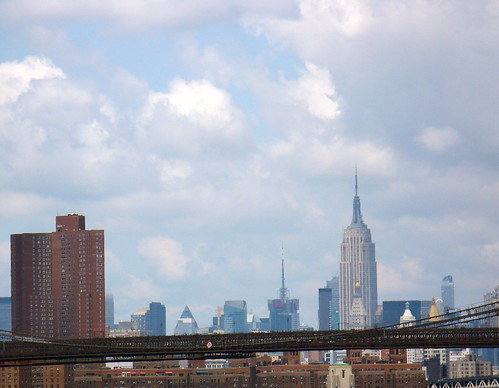 And if you turn east, you see some of the pretty homes by the waterfront promenade. 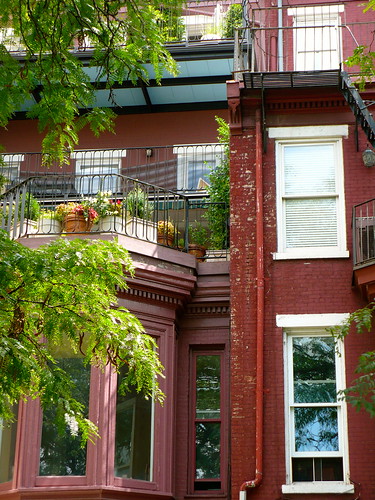 We headed north towards the Brooklyn Bridge. Along the way, the guide took on us a on an elevated ramp that's built to shake underfoot, which is hilarious when you're dozens of feet above concrete. Once I got past the first few seconds and realized that no, it probably wouldn't really break, it was sort of fun.

Getting closer to the Brooklyn Bridge now, that engineering wonder... 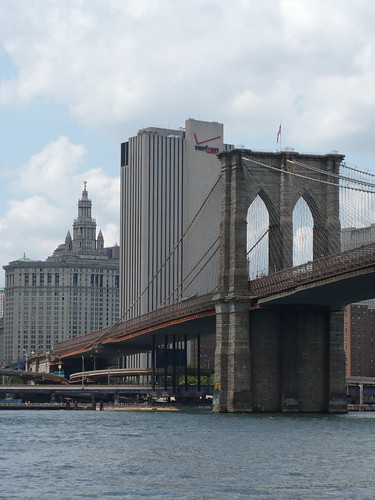 People were enjoying many activities on the Brooklyn waterfront (among them, standing on a long line at the Brooklyn Ice Cream Factory). One of the attractions, mostly for kids but also for some adults who indulged without the excuse of accompanying small children, is Jane's Carousel. This was built in 1922, exquisitely made, with very festive old-fashioned music spilling out of it. 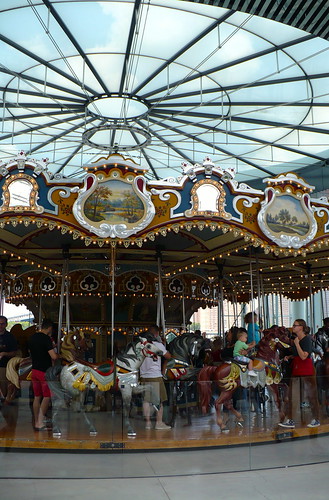 From the Brooklyn Bridge Park, you can also look north up the East River and spot other bridges connecting Manhattan to Brooklyn: In the foreground, the Manhattan Bridge, and beyond it the Williamsburg Bridge. 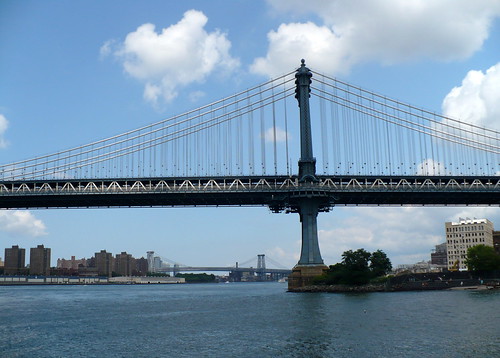 There's the Manhattan Bridge again, showing between some buildings a little further inland. 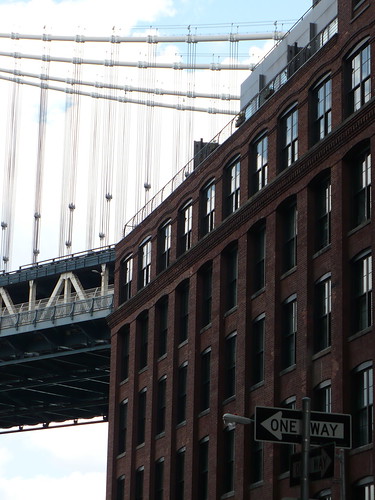 To finish the visit to Brooklyn, I decided to walk on the Brooklyn Bridge. It's on many "Things to do in NYC" checklists, and for good reason. 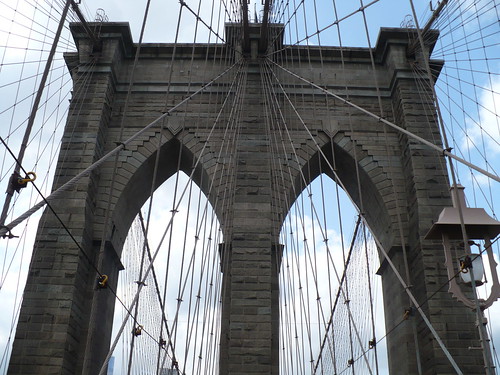 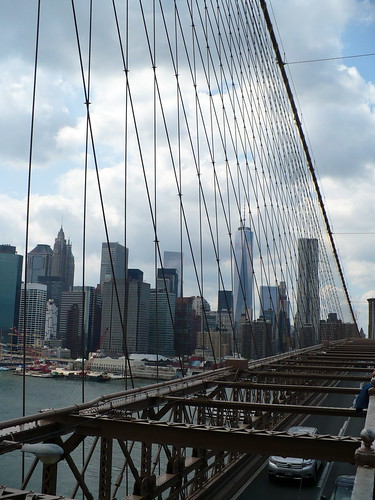 This was my first time crossing the bridge on foot (or maybe ever - I don't think I ever drove over it). The pedestrian path was really crowded, so I think it's better to do this at sunset or early in the morning. The views were still wonderful. And some of the graffiti was funny (including someone who had written their Instagram address and urged people to follow them on the site).

It just occurred to me before hitting publish that I didn't explain what DUMBO is. Much as I'd like to show you a photo of a flying elephant, DUMBO is just the name of a Brooklyn neighborhood: Down Under the Manhattan Bridge Overpass.