Who is Warren Schmidt and why does he have reason to despair?

Early on, we watch Warren Schmidt (Jack Nicholson) at his retirement party. His best friend makes a toast and tells Warren that a man can be proud if he looks back on his life and sees a loving family, good friends, and meaningful work. And while, on the surface, Warren seems to lay claim to that legacy, it isn't long before he realizes that his life is empty. His years of work in insurance are irrelevant to the young man succeeding him on the job. He's disconnected from the community and from friends. Now that he's at home with his wife all day, he realizes that she's virtually a stranger. And though he thinks with fondness of their one daughter, Jeannie (Hope Davis), all of his fond thoughts center on her as a young girl. The adult Jeannie is a stranger to him as well.


In the movie he embarks on a quest to try to prevent her marriage to Randall Hertzel (Dermot Mulroney), a waterbed salesman who gets super-excited about pyramid schemes. Randall might love Jeannie, might treat her well, but Warren can't stand that the guy is, intellectually and professionally, a dud. And to Warren, Randall's family is a bit nuts too, especially his mother, Roberta (Kathy Bates), an artsy woman who doesn't know the meaning of TMI and can turn foul-mouthed and angry when provoked (invariably by her ex-husband).

At one point Warren tries to convince his daughter that her future husband and in-laws are beneath them. His daughter looks puzzled and hurt, then angry. She gets along with all of them; she's comfortable with them. Does that make her as inferior as they are in her father's eyes? And what claims to superiority can he make anyway?

Warren tries to re-examine his life in the course of the movie, but he doesn't seem equipped to do so. He falls back on platitudes. He struggles wordlessly with emotions he can't name, frustrations and thwarted longings. He comes to some painful realizations, but doesn't know how to act on them. 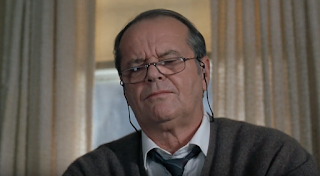 Some people dislike the ending, but I didn't have a problem with it. I didn't see it as a sentimental copout. Without giving too much away, I'll just say that it shows that Warren might have done some good in the world - at the same time, it's kind of sad that what may be his greatest deed has involved the least amount of time and personal involvement on his part compared to anything he's ever dedicated himself to. When he cries in the final moments of the movie, are those tears of unadulterated joy? Does he buy into the idea of easy redemption - that now, all is right again in life? Or is the joy tempered by a better understanding of himself?

I enjoyed the characters in this movie. Roberta and Randall sometimes verge on being caricatures, but ultimately they're handled well by the actors playing them (I liked Kathy Bates's performance especially). Jeannie, in a solid performance by Hope Davis, isn't always clear to us as a character, largely because we see her through her father's eyes; just as she's become a stranger to him, she's a stranger to us. And we sense, in how they talk to each other, that she holds resentments against him, maybe for being so uninvolved over the years and uninterested in what she's been doing with herself - because he prefers to think of her as a young girl with unlimited potential, her whole life ahead of her. As for Nicholson, he keeps Warren from being boring or lifeless. Warren is subdued, but there are some things fighting in him, anemic struggles that sometimes flare to hot life, and then die again.