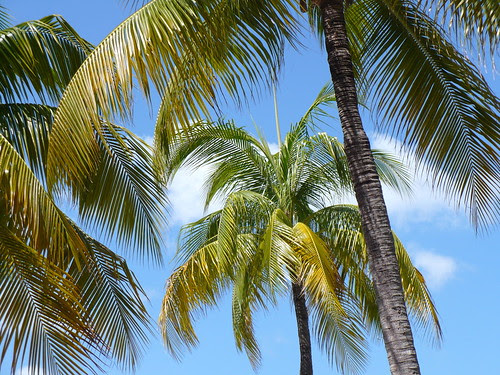 botanic
Sore with sunburn, we seek the shade of the color garden with its wall of trees and shrubs, its tiny darting lizards and tropical flowers.

cock-a-doodle-doo
The free parking lot in Georgetown, by the harbor, is a grassy lot where roosters strut around, pecking at the dirt, dodging the occasional car, and crowing their hearts out.

cocktails
At the poolside, everyone is pleasantly soused.

cruising
The public bus is a van, but there's room for everyone who wants to get on. There are some bus stops along the route, but the driver will stop anywhere if you flag him down. He listens to the same rapid, unending, unchanging music that plays everywhere else on the island and that sounds better when you've had a drink. When people pay him, he keeps the cash clutched in his fist, even as he drives.

cyclurids
After trundling along for some time with its head bobbing aggressively, the large blue iguana settles right in the middle of the path, in a patch of shadow cast by an overhanging tree. It stares at us dispassionately, not realizing that it's blocking our way. We could step over it, or maybe try to slip around it. Blue iguanas are herbivores, and they rarely bite people. But why take a chance? So after several minutes spent staring at it as it stares at us, we turn around and head back. Humans, with all the force of our intelligence, foiled by a lizard seeking a little shade.

immersed
For the first time in years, I swim in the ocean. The water feels like silk. When I look down at my hands, they're green and white. Waves spill over my back.

respire
The labored breaths of sea turtles coming up for air.