Last month, I took a few days off for vacation, and my destination was Grand Cayman. One of the highlights of the trip was a visit to the Queen Elizabeth II Botanic Park, where you can come across the island's blue iguanas, a species that can grow over five feet long.

The blue iguanas, which are native to Grand Cayman, came very close to extinction (there were less than 20 left in the wild in 2002). The botanic park is one of the sanctuaries on the island where they're breeding and their population levels are rising.

They roam freely in the park, and so it's likely you'll see them as you walk around.

Here's one that was relaxing in the sand garden. A park volunteer pointed him out and said he'd just chased another male off his territory, so he was likely tired out. He tolerated the company of six or seven tourists standing around taking photos. 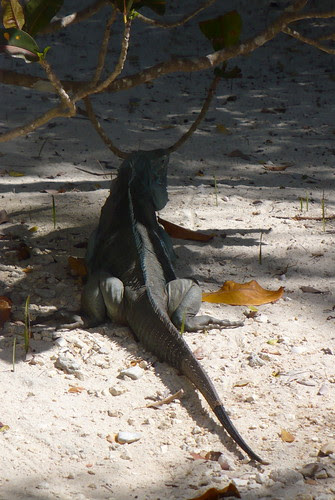 Another one was stalking around a picnic area. There are signs warning you not to feed them, but I suspect someone fed this one anyway, because it was moving towards us in an eager, possibly aggressive way. When they're warning you off, the blue iguanas bob their heads and open and close their mouths; this one wasn't making that kind of display, but it still put us on guard, so we backed off. They're herbivorous, but they can bite. 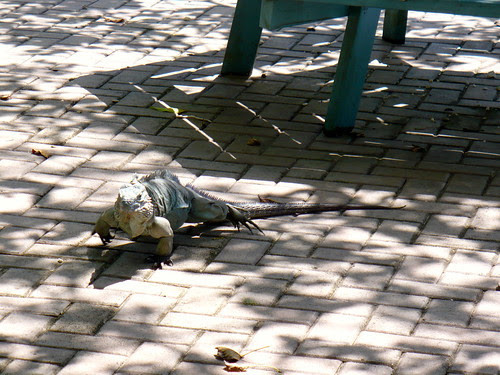 Lastly, we were on a woodland trail, which in February was dry and brown, and one of them came out ahead of us on the trail. It walked for a bit, stopped, bobbed its head and opened and closed its mouth at something in the shrubs, kept walking, stopped a few more times to do the whole aggressive head-bobbing display again, and finally settled in a spot of shade right in the middle of the path. 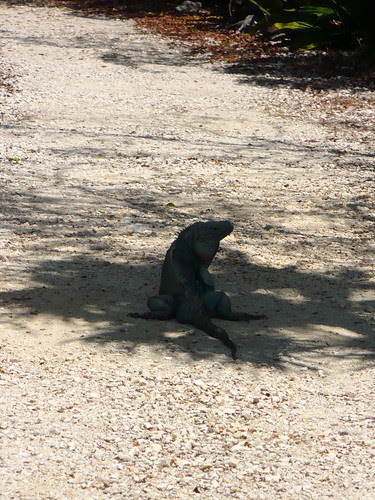 We decided not to try and walk around it, as it was keeping an eye on us and had made aggressive displays. It really liked the shade, right on that spot on the path.