I had a feeling I'd like this movie, and I was right.

Much of it is set in The Footlights Club, a boarding-house for aspiring actresses and other stage performers trying to make it big (or at least find work) in New York City. Jean Maitland (Ginger Rogers) is a smart-alecky blonde who butts heads with her new roommate, Terry Randall (Katharine Hepburn), a bright Midwesterner who seems to have an enviable amount of money and more booksmarts than real experience. Linda Shaw (Gail Patrick) is enjoying jewels, furs, and fine dining paid for by her sugar daddy, while Kay Hamilton (Andrea Leeds) has failed to find any new work after she made her successful debut on the stage a year earlier. The other boarding house inmates - played by the likes of Lucille Ball, Eve Arden, Constance Collier, and Ann Miller – keep each other's spirits up by hanging out together and cracking jokes.

The movie is full of funny witty lines; much of the dialogue in fact was ad-libbed by the actresses themselves during rehearsals and incorporated into the script by the filmmakers.

Their defiant joking attitude keeps the women in Stage Door from leaving The Footlights Club and going home - assuming they have homes to return to. I like how the movie shows that their circumstances are fraught, and many of them are living just this side of real poverty. Their career success hinges largely on chance encounters and the whims of remote powerful people.

A real pleasure in this movie is watching Ginger Rogers and Katharine Hepburn snipe at each other. Hepburn plays Terry as a woman determined to make her own way through life; she's formidably intelligent and full of the tonic of sensible advice. Rogers plays Jean as basically decent but also cynical, barely daring to hope for better things and struggling to hold onto her principles. (Rogers also has a masterful way of showing her character's insecurity - look at her face as Jean lays eyes on Terry's enormous wardrobe of expensive clothes; she's intimidated and trying not to show it.) Both women are clever and kind in different ways, if at times insensitive, and both of them grow in the course of the movie.

Rogers is also great with Lucille Ball, and when paired with Ann Miller as dancing partners. Miller, who was one of the best tap dancers ever anywhere, was only fourteen when she made this film, and only gets to show off a little bit of her amazing (even at that age) dance skills; she has this gawky adolescent quality that's endearing. Just the sight of her and Ginger Rogers dancing together is a thrill. 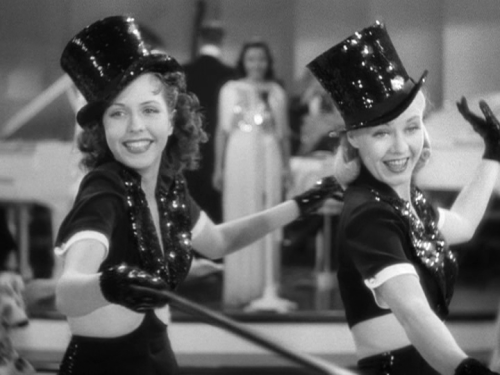 That's one of the great things about this movie: its portrayal of women as friends, friendly rivals, not-so-friendly rivals, sisters, confidantes... sometimes cutting each other down but mostly supporting and worrying over each other.

Any men in this movie? There's one male character with a meaningful role: Anthony Powell, a predatory (and pathetic) Broadway producer played by Adolphe Menjou. Menjou is great at showing both sides of Powell's character: the insensitive cutthroat lothario and the aging fool. Two memorable scenes in the movie take place in Powell's penthouse, with his butler who tiptoes backwards out of rooms. In one of them (the hilarious Pygmalion and Galatea scene) it's Menjou and Ginger Rogers; in the other it's him and Katharine Hepburn. He relates to each woman differently, and both scenes are well-crafted with funny twists to them.

The movie's main weakness is the way it handles the character of Kay, played by Andrea Leeds. From the very first time we see her Kay has tragedy written all over her pale, dreamy, malnourished face. If the filmmakers (and Leeds) hadn't tried so hard to turn Kay into a tragic saint, but had let her be more human like the other women, I would have felt more for her.

That said, I'll end on this question, which comes up over and over throughout the movie: What sacrifices are you willing to make for art and for success?

*All images link back to their sources (Flixster Community, Classic Images, and Strawberry Blonde Films).