Undine Spragg: All That Glitters Is Not Gold

Edith Wharton's The Custom of the Country was one of my selections for the Classics Club Challenge. It's a masterpiece of social commentary and psychological insight, and at times I wanted to throw it across the room (or rather, throw its heroine and her associates across the room).

The heroine of the novel is Undine Spragg, a superficially beautiful woman who glitters and consumes and believes herself to be entitled to everything she takes from others (because it's not really taking, in her view, it's more like receiving what she deserves for simply existing). 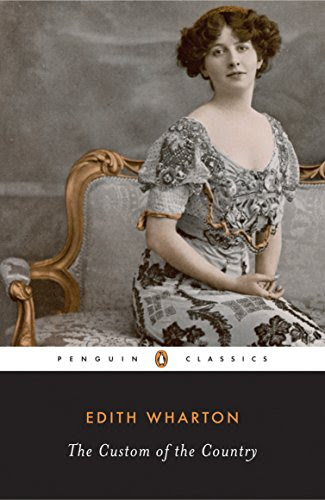 Undine regards everyone and everything as a means to her personal gratification. Other people can go about their lives and do whatever it is they want to do, as long as they're satisfying her wants. If they aren't, it means they're wrong and perverse and the whole planet has gone off course, and Undine will do everything in her power to right it. If people's lives get destroyed in the process, it's hardly her fault for asserting her rights. (She's very big on "rights" while having no empathy or sense of what's right.)

This character so disgusted me that I had to put the book down for a while. But ultimately I kept reading for two reasons: 1) Wharton is a masterful writer, who uses sharp, beautiful prose to peel back the layers of her characters and expose them to their very veins 2) I started to read it as a dark comedy - at times a very dark comedy, with lots of painful irony, and a heroine who gets away with everything because through her Wharton is exposing the wider culture where a monstrous human being like Undine Spragg can be be nurtured, indulged, and helped towards social triumph, even though the majority of women in her position would have faced more severe consequences.

At the start of the novel, which is set in the early 20th century, she's arrived in New York City with her parents in the hopes of marrying into high society. Her father made some money in the Midwest, which is why they can try to attach themselves to the well-monied New York crowd. In NYC they find two main kinds of wealthy families. There are the nouveau riche - people whose backgrounds might be quite similar to Undine's: the men made it big in business, they're ostentatious, caught up with what's trendy and showy, don't have a drop of aristocratic blood or much in the way of education and culture. Then there are the older families who've been the elites for a while; they aren't necessarily rolling in money (in fact they see business as something distasteful), but they do have fine homes and an appreciation for tradition, family, fine culture and education.

Wharton's sympathies seem to lie with those older families; at the same time she's merciless towards them, exposing their ineffectuality in the face of a more brazen, unprincipled and acquisitive culture. Undine's first husband, Ralph Marvell, is from one of the older families and is the most sympathetic major character of the book, but he's passive when he shouldn't be and makes blindly foolish decisions that class him with the rest of Undine's enablers. These constitute a diverse group including her parents and assorted society notables, who act towards Undine out of various motives or weaknesses of character, but have the unified effect of letting her get away with whatever she wants.

Undine isn't an independent woman, not by a long shot. Willful, yes, but she needs other people to admire her, amuse her, and supply her with money for everything she wants. She wilts when she's away from other people; she has few mental or emotional resources of her own and isn't expected to make money on her own. When she slips from one husband to another, she's exchanging one dependency for another, and is conscious of how she can lose everything if she makes one wrong move. Her power comes from learning how to read other people and draw the desired response from them. She relies on her beauty, and on an ability to adapt herself to situations and become to a limited extent what others want her to be. To intelligent, sensitive and poetic types (like Ralph) she may seem like a pool of water whose glittering surface conceals unexplored depths, until they dive in and injure themselves on the hard, shallow bottom.

(Ralph also had the conceit of becoming Undine's teacher - she was meant to be his fresh, innocent Midwestern muse that he would guide through a new world of art and literature - another variation of the woman dependent on the man while inspiring him as an object of beauty, though softened by Ralph's hope that they truly would become companions.)

Part of Undine's artful use of her beauty is how she suggests qualities she doesn't have (or understand) by knowing what they should look like on the surface; she's great at striking a meditative pose, or looking fresh and innocent or sweetly somber. Her ability is a wider comment on the culture she belongs to - an imitative American culture short on real feeling or a sustained attention span, where people mimic Old World, European-style mannerisms while having little appreciation for anything lasting and deep. The model of marriage among the wealthy business class in this culture (and promoted as the cultural ideal) is one where money is substituted for intimacy. The husband works at Wall Street to keep his wife as a creature of luxury and feed her bottomless demands for more stuff; it's not as if she's expected to occupy her mind with anything else. When they do spend time together, it's mostly in the company of other people, at grand dinners, opera, theater, and other outings. Everything is prized for its surface appearance.

As someone who lacks depth of feeling and empathy, places a price tag on everything and everyone, and has no clue about how money is made, Undine is the model woman of her culture, the best reflection of its ideals: ignorant, ruthless, and demanding, a monstrously spoiled child. She has some male counterparts in the book - Peter Van Degen, for one, a beast of a man whose money is a means of satisfying every appetite... but even more than Peter there's Undine's real match: Elmer Moffatt, a somewhat mysterious figure who keeps popping up in the book like a jocular devil - stout, red-faced and full of grand schemes. Had she been a man, Undine might have been a lot like Moffatt; she has that business-like mind and eye for opportunity. But because she was raised to be a kept creature, she must use her business acumen to secure people she can depend on for a steady cash flow and social cachet.

There are many gems in the writing: artistic ("... night after night the skies were wine-blue and bubbling with stars"), humorous ("Mrs. Shallum, though in command of but a few verbs, all of which, on her lips, became irregular...") and insightful about human nature ("Everybody wanted him to write – everybody had decided that he ought to, that he would, that he must be persuaded to; and the incessant imperceptible pressure of encouragement... acted on his restive nerves as a stronger deterrent than disapproval"). It's a cutting, amusing, and absorbing novel, a great book.