Synopsis
Alice Hyatt (Ellen Burstyn) is a widow who plans to move with her 11-year-old son, Tommy (Alfred Lutter), from their home in New Mexico to Monterey, California where she had lived as a girl. Short on cash, they need to stop along the way at different cities for Alice to earn some more money - ideally as a singer (which has always been her dream) but, if necessary, as a waitress too. As she and Tommy meet and tangle with all kinds of people, they find themselves changing their plans. 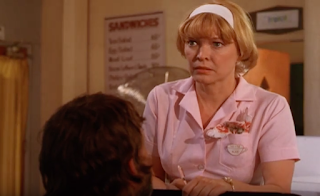 Ten reasons the film is worth watching
1) Alice is a wonderful, complex character - blunt, goofy, incisive, and self-doubting. Ellen Burstyn's performance is terrific and got her a well-deserved Best Actress Oscar; it never feels like she's acting, but that Alice is in fact a real person. She's the heart of the film.

2) The relationship between Alice and Tommy is well-written, with natural and often funny back-and-forth between them; at the heart of it they're kindred spirits. I liked the kid, mostly because he comes across as a real kid and not a cutesy child caricature.

3) There are memorable secondary characters too, and they're written and acted without self-consciousness; as odd as they sometimes get, their eccentricity just seems a natural part of things and not something that's forced out for laughs. I especially like the two waitresses at the diner in Tucson: Flo (Diane Ladd) and Vera (Valerie Curtin). Flo is tough, brassy, and swears creatively, but there are other sides of her that you discover as the movie progresses. And Vera is just strangely likeable and happily unexplainable.

4) Harvey Keitel also crops up as Ben, a man eight years younger than Alice who knows how to make her laugh, is kind of silly and persistent. Because he's played by Harvey Keitel, grinning like a cat, I kept waiting for the other shoe to drop...

5) There's a romance angle to the film in the form of David (Kris Kristofferson), a lonely clear-eyed rancher. Just like the rest of the movie the romance isn't cute or sentimental. There's genuine chemistry and friendship between Alice and David, along with a few rough patches they need to work through. The scene where they're in his kitchen after making love, and she's telling him about the stage act she used to do with her brother, is one example of how the movie keeps this relationship fresh. It's between two particular people - not a canned Hollywood romance.

6) The film is well-paced with some beautiful camera work. There are several scenes and sequences that stand out in particular, like when Alice is looking for a job in Phoenix. The last time she worked as a singer was before her marriage, and now she's older, her voice is charming but rusty, and she's going in heels and a new dress to all these different bars trying to find someone who will hire her. The pressure and fear of failure are palpable, the scrutiny from others is something that as a viewer you can feel even though it's directed at her, and Alice is a picture of determination and desperation - she not only needs the money, but needs to be able to tell her son (who's waiting for her in a rundown motel room) that she landed a job.

7) It's worth saying again that Burstyn's performance is one-of-a-kind. She also had a lot of creative control over this film, ideas of what it should be like, and selected Scorsese as the director.

9) If you're a fan of Jodie Foster, she's here too as a guitar-playing tomboy. Not a large part, but she's got some funny moments as Tommy's new friend in Tucson. (A few years after this film she appeared in Scorsese's Taxi Driver as a 12 year old prostitute exploited by Harvey Keitel's character, Sport, who lounges around in doorways grinning like a cat.)

10) The film shows Scorsese's range. No mobsters, no urban underbelly; the setting is the southwest US. He makes a movie about an interesting woman, her dreams, losses, loves, her choices good and bad, her friendship with other women (some great scenes between Alice and her friend Bea at the start of the film in New Mexico, and then her relationship with Flo). What she's like as a mother, a lover, a person on her own and among other people. A warm, funny and unsparing character portrait.